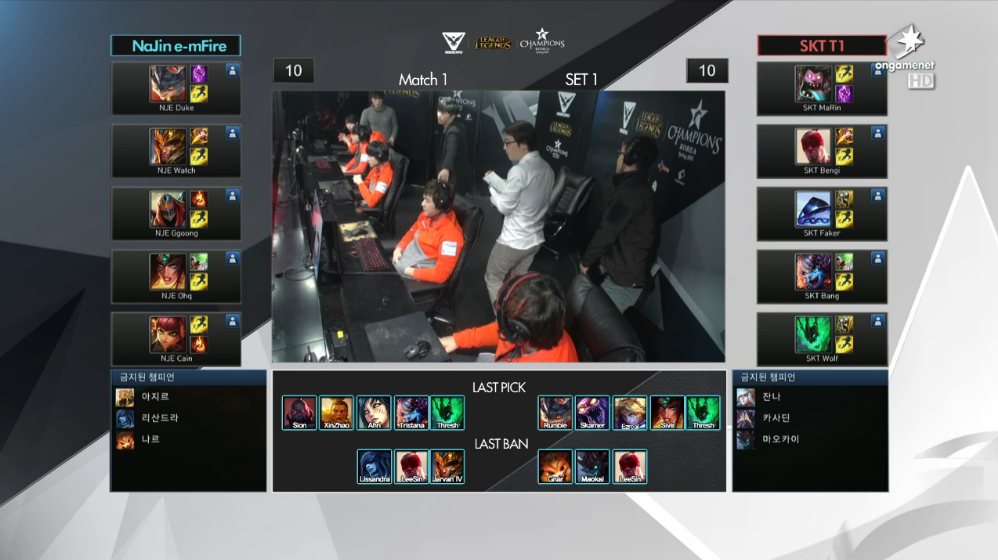 For those of you who are unaware, Korea’s OnGameNet (OGN) kicked off its Champions 2015 season last night with a best-of-three series between SK Telecom T1 and NaJin e-MFire. This season, Riot Games collaborated with the Korean eSports Association (KeSPA) to change up the OGN Champions tournament rules and regulations (detailed info can be found here), leaving many organizations in the sticky situation of keeping some players while dropping others. Last night proved just how exciting and unpredictable the new rosters could be, leaving behind a memorable season opener that, fans can only hope, is a sliver of what’s to come in 2015.

In game one, SKT T1 introduced their starting roster as MaRin in the top lane, Bengi coming out of the jungle, Faker in mid, and Bang laning bottom with Wolf to round out a rather impressive squad that attempted to combine the best of former World Champion SKT T1 K and its sister team SKT T1 S. NaJin countered with Duke in the top lane, Watch manning the jungle, Ggoong sitting mid, and matching up Ohq with Cain in the bot lane. Christopher “MonteCristo” Mykles and Erik “DoA” Lonnquist, the caster duo on the English broadcast, discussed the combination of Ohq and Cain multiple times, citing their lack of LAN experience as a pair; however, the first game seemed to silence those worries, at least for the time being.

NaJin banned both Lissandra and Gnar, from blue side, against MaRin, leaving one extra ban for SKT T1 (expecting to ban Gnar from red side), with which they chose Maokai. Duke has shown success on tanks in the past, but is more known for his aggressive, playmaking style (similar to former NaJin top laner, Save), making the Maokai ban more of a courtesy rather than a target. However, with three of MaRin’s top champions taken out of the game in the ban phase alone, NaJin decided to take Rumble with its first pick, thus further shoving MaRin out of his comfort zone. SKT T1 chose to live on the edge and select Xerath in its first rotation of picks, which MonteCristo believed to be “bold” and likened the scenario to a similar pick/ban phase before the Season 4 World Championship, where SKT T1 K failed to qualify. They then picked up Dr. Mundo and Tristana, both designed to be absolute monsters in the late game by sacrificing early game power and survivability. Although the entire SKT T1 roster entered the loading screen on comfort picks, the overall composition heavily favored the later stages of the game, thus revealing a gaping hole in their early game laning phase. NaJin, on the other hand, took a very fast-paced composition, locking in Sivir and Annie, for the duo lane, to go along with Rumble and Zed.

Bengi fell for a quick first blood, attempting to gank bottom lane through the river and instead getting caught in a well-placed Rumble ultimate. A few seconds later, Faker roamed top and sniped Cain in a duel between the two duo lanes. Around ten minutes in, NaJin caught SKT T1 recalling and took the first dragon, which was followed six minutes later by a second one, although this time taking three members of SKT T1 with them. In a quick, 32-minute game, NaJin put on a dominating performance to kick off the 2015 season, ending with over a 16,000 gold lead. Ggoong led the troops with a 13/1/7 score line, though both Duke and Ohq shined in their positioning, each finishing the match without a single death. The faster-paced, early-mid-centric teamfight composition that NaJin threw together ran all over the poke-oriented siege composition that SKT T1 failed to execute, leaving NaJin with a 1-0 lead in the series.

One of the most notable additions to the 2015 Champions ruleset is the ability for teams to swap players out with their positional substitutes on a game-to-game basis in best-of-3 and best-of-5 series. Taking advantage of this rule, the SKT T1 coaching staff decided to pull their star mid laner for his counterpart, Eazyhoon. Much more well-known for his

familiarity with long-range mages such as Syndra, Xerath, Ziggs, and Karthus, Eazyhoon thrived in the passive system of SKT T1 S, and offers less playmaking ability but arguably more consistency in a team atmosphere. Also worth noting is the fact that with Eazyhoon in the SKT T1 lineup, Bengi stands as the only remaining member of the defunct SKT T1 K roster, which could lead to better synergy among the players.

NaJin, now on red side, took this opportunity to ban all three of MaRin’s preferred picks, only leaving the Maokai up. However, as mentioned previously, Duke is not a renowned Maokai player, so SKT T1 decided on Janna as their first lock-in. NaJin selected Dr. Mundo for Duke as their final pick, to lane against Maokai, rather than a more aggressive, playmaking champion such as Renekton or Irelia. Unlike SKT T1’s composition from the previous game, NaJin provided more early game presence with a Jayce pickup for the mid lane, so as to pressure one part of the map while the other two lanes get going. SKT T1 chose a very balanced siege composition with strong lane matchups and heavy poke, only lacking in area-of-effect CC. Corki and Xerath work incredibly well together in sieging down towers due to their low-cooldown, high-damage nukes that can effectively force a team away from tower defense duties in the span of one wave. This mid-game power spike combined with disengage and safety (Janna), peel and targeted CC (Maokai), and a strong early game jungler (Lee Sin) immediately gave SKT T1 the edge in terms of composition.

SKT T1 struck first, combining the efforts of MaRin, Bengi, and Eazyhoon to nail Ohq for first blood. However, NaJin again caught SKT T1 in retreat and took the first dragon for themselves. MaRin and Bang managed to take down the two outer turrets on their own, before the entirety of SKT T1 grouped mid and began the siege. Watch did his best to dodge the barrage of skillshots coming from Bang and Eazyhoon, but got clipped by the edge of a Big One from Bang’s Corki, giving his life along with that of their middle turret. As dragon spawned, Ggoong took Bang and Wolf down to around 25% HP each with his Acceleration Gate/Shock Blast combo, forcing Wolf to use Monsoon early just to survive the Jayce damage. However, NaJin could not execute well enough around the already-tanky Maokai, leaving Bang and Eazyhoon to kite back and thus take the fight in favor of SKT T1. From this point on, SKT T1 dominated as hard as, if not harder than, NaJin had in Game 1, eventually ending with a nearly 18,000 gold lead and an MVP award for Eazyhoon for his outstanding Xerath play.

Game 3 saw the return of the unkillable demon king, as Faker reunited with the rest of the team.

As NaJin returned to blue side, they picked Rumble in the first rotation while banning out Lissandra and Gnar (also note that both games Faker was in, Azir was banned). Again, SKT T1 prioritized Janna in the support role, taking her along with Lee Sin for their first two picks. Watch then pulled a Kha’Zix out of the bag, due to Lee Sin being picked away and Jarvan IV having been listed in the bans for SKT T1. MaRin defaulted back to Maokai, and Bang onto Tristana, before the stadium erupted in surprise and awe. The current live patch has every champion, including Rek’Sai, enabled, but competitively, this match was played on a previous patch, with only Rek’Sai disabled. Thus, the recently-released Kalista was available to both teams, an opportunity that Ohq relished.

The first sighting of Kalista in competitive play was nothing to write home about, but wasn’t too shabby either. NaJin chose to send her into the top lane against Maokai, which gave her a nice bit of free farm, but took away a lot of her power when Braum roamed to help the other lanes, due to her passive being starved of its soulmate. In other news, Faker solo-killed Ggoong multiple times in the mid lane (snowballing off of a level-one gank from Wolf’s Janna), eventually building up an item advantage of Deathfire Grasp vs. Fiendish Codex, which heavily swung the game in favor of SKT T1, thus muddying the unveiling of Kalista. The destruction of Ggoong in the mid lane carried over to the other lanes when Faker began to roam, piling up kill after kill until SKT T1 took home the 30-minute win, and the series, over NaJin e-MFire.

Day 1 of OGN Champions Spring 2015 provided some nice highlights, another intro featuring Watch’s stare, and great competition between arguably #1 and #2 in Korea. Get ready to see the GE Tigers take on Incredible Miracle on January 9th, available on the official Riot Games stream!