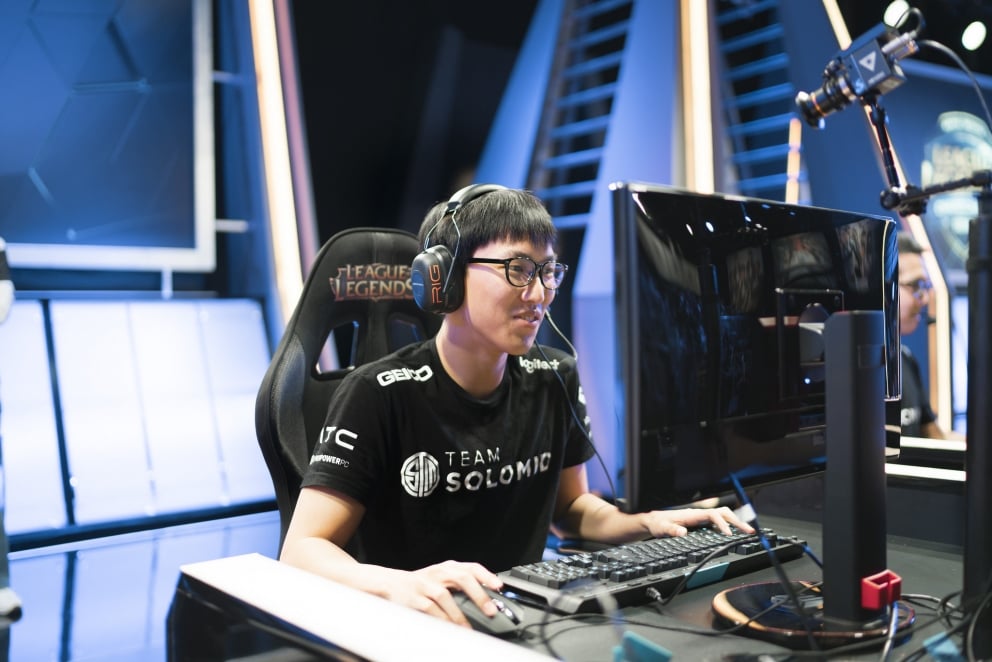 A series of post-game interviews perceived as passive aggressive attacks from former teammate and Counter Logic Gaming support Zaqueri ‘Aphromoo’ Black thrust Team SoloMid AD carry Yiliang ‘Doublelift’ Peng’s persona back into the public sphere of discussion after CLG defended their North American LCS Title in a 3-2 victory over TSM. However this is not the first time Doublelift has been considered a controversial figure in League of Legends. He’s been one for the entirety of his career. Throughout Doublelift’s own time on CLG, fans, analysts, fellow players and even casters would frequently discuss his ‘selfish’ playstyle. For many seasons, Doublelift’s ‘selfish’ play was often cited as the both the reason for his individual success, as well as the cause his team’s failures. In fact, this perception of Doublelift’s playstyle has become so prominent in the mind of the public that when players are caught out split pushing away from their team, casters will often bring up Doublelift’s own perceived tendency to do same, even when he isn’t playing in that game.

While Aphromoo would later clarify his remarks as being nothing more than a shout-out to ex-CLG players who he felt missed a chance to develop during their original time with the team, his comments have nonetheless brought to light one of the most interesting disparities in NA LCS analysis. Doublelift is still criticized for his selfish playstyle; but these criticisms haven’t been true for a while. Regardless of Doublelift’s attitudes as a teammate, he has increasingly taken a utility and supportive role for his teams when needed. Once criticized for his small champion pool, Doublelift has continued to adapt to meta picks, including supportive ones like Sivir and Kalista. Although Doublelift is stereotyped as overly focused on the laning phase, he has widened his perspective on the early game to be more focused on teamwide map movements. Finally, Doublelift has accepted low farm roles, while still demonstrating the ability to slide into high pressure carry positions when his team needs it.

As outsiders, it’s impossible to fairly evaluate Doublelift’s role as a teammate. But from what can be observed, a lot of the criticisms of Doublelift as a selfish player are now inaccurate. Doublelift has diversified his game, and it’s shown in his past two teams’ successes.

While Doublelift is perhaps best known for his ability to dominate lane and take over the game on aggressive picks like Vayne, Ezreal and Lucian, his highest win rates remain on powerful utility picks, including Sivir, Kalista and Ashe. Although Sivir is able to put out high amounts of area-of-effect damage in team fights, her value has always placed in the strength of her team-wide speed-up ultimate, On the Hunt. In addition, Sivir also has a mediocre laning phase due to her short range. Doublelift’s 6-0 record on Sivir under Christopher ‘MonteCristo’ Mykles coaching in Season 4 was arguably the first visible step to his development as an AD carry capable of playing utility roles.

The Season 4 CLG lineup of Zach ‘Nientonsoh’ Malhas, Marcel ‘dexter’ Feldkamp, Austin ‘Link’ Shin, Doublelift, and Aphromoo quickly established themselves as a rotations focused team – outsmarting their opponents with map movements and snowballing their gold leads by forcing teamfights with the Sivir ultimate. The team was one of the first to adopt the 4v1 tower push as well, an adaptation which gave up individual gold in favor of global gold from towers and dragons. CLG’s success using this team-centric style would continue throughout this Spring Split until their semifinal series against TSM. After winning game one, the team would find themselves up 5k gold in game two. But the one-two punch of a pick onto Link’s Orianna by Alex ‘Xpecial’ Chu’s Thresh, in conjunction with Marcus ‘Dyrus’ Hill solo-killing Nien after he failed a ward jump on Jax, allowed TSM to equalize the match score and go on to take the series. Although CLG would beat Team Curse in the third place decider, Nien would end up leaving the team in the off-season.

When Nien left Counter Logic Gaming, he complained about his role on the team and how he felt he suffered from an unwelcoming environment. Fans immediately pointed to Doublelift as the primary culprit, an accusation which Nien later confirmed. Nien’s complaints about Doublelift as a poor teammate should be taken seriously. It’s quite possible that Doublelift’s behind-the-scenes actions may have impacted Nien’s in-game performance – regardless of their intent. This is especially true when considering the pressure and obstacles Nien likely faced when learning a new role at the professional level.

However, this criticism has often overshadowed this era as the beginning of Doublelift’s improvement as a teammate. With the AD carry position continuing to grow into the most important objective taking role, it’s always been surprising to me that fans could simultaneously call CLG a rotation focused team, while stereotyping Doublelift as an entirely selfish player. Foregoing personal advantages in lane for teamwide objectives is hardly selfish. Although he would still struggle with occationally being too lane focused or requiring too many resources in teamfights, Season 4 Spring CLG was the beginning of Doublelift’s move from a lane focused AD carry into a map focused one.

When Nien and, later Shin ‘Seraph’ Woo-yeong, left CLG, both players complained about a lack of carry opportunities with Doublelift on the team. Upon Darshan ‘ZionSpartan’ Upadhyaya’s Season Five arrival on CLG, however, it became increasingly apparent that Doublelift was able to let a top laner he trusted flourish, as he would take a reduced gold share to facilitate one of the best split push players in North America. In ZionSpartan’s first split with the team, CLG would once again fall out in the quarterfinals, in spite of introducing a new strategy focused around the top and mid lane. Coach Ziks would later comment on reddit that the team failed to adapt to a top/mid centric style of play after several years of focusing on the bot lane.

But in the next split, CLG would go on to take the second seed heading into the playoffs, sweeping both TiP and TSM to take the championship – Doublelift’s first LAN victory. CLG’s victory over a Doublelift led TSM in the 2016 NA LCS Finals, with Stixxay may suggest to some fans that Doublelift’s strong play was unnecessary. But in reality, his Season 5 Summer Split playoff performance was absolutely crucial.

Although ZionSpartan, now known as Darshan, won the Season 5 Summer Split Playoffs MVP, it was Doublelift’s performance on sieging hypercarries, such as Jinx and Tristana that was especially critical to CLG’s win. In the early game, Doublelift would use the pick potential of both champions to combine with Aphromoo in sabotaging the other team’s lane swaps. In the mid game, he would use those champions, and their attack speed steroids, to rotate around the map and quickly take down towers. None of these conditions relied on exceptional creep score leads from lane, or highlight reel worthy outplays. Instead, CLG found success by moving Doublelift with the rest of the team.

This team-based play was also critical to the team’s Season 5 Summer Split late game win conditions. Due to their Top Laner’s inability to flank, CLG often struggled at engaging teamfights, and instead needed to bait other teams into engaging onto them. In these fights, Doublelift’s play was particularly impressive, repeatedly kiting back his opponents, and providing his teammates with a window of opportunity to turn teamfights. All of CLG’s members were important in their kiting teamfight identity; but Doublelift’s mechanical ability served as the team’s spearhead in surviving these encounters. His final season on CLG combined the objective focus approach he had begun learning over a year earlier with his star carry mechanics. He became a complete star player, earning CLG and his trophy case their first LCS championship.

Playing as a role player on TSM

This season, Doublelift has continued to take a step back from the limelight. When he first arrived to the team, Peng shared primary carry status with Søren ‘Bjergsen’ Bjerg, but meta shifts and team developments, most notably the return of Dennis ‘Svenskeren’ Johnsen in the playoffs, meant that Doublelift found himself playing a tertiary role. In addition to this change in gold distribution, Doublelift had spent the majority of his career playing alongside early game focused support player, Aphromoo and Steve ‘Chauster’ Chau. His new bot lane partner, Bora ‘YellOwStaR’ Kim, was not only struggling to return to form after moving to America, but has historically preferred to focus on roaming and teamfighting rather than the lane phase. The former CLG ad carry needed to continue to adapt, and he did.

Although Doublelift played nine different markmen over the course of the 2016 NA LCS Spring Split, his most picked champion by the end of TSM’s playoff run was Kalista. Boasting a 69% win-rate on the champion, Doublelift would double down on Kalista’s utility focused approach by rushing Runaan’s Hurricane for increased wave clear. Despite this greater focus on utility, fans, eager to point out the TSM ad carry’s flaws, would often point to WildTurtle’s and Stixxay’s much higher damage statistics. Both the AD carry Doublelift replaced and the one who had replaced him were dealing more damage. So in many fans eyes, Doublelift must have been an overrated player. In reality, Doublelift was simply playing a smaller damage role than he had in the past. Whereas Turtle was allowed to go into melee range on high damage picks like Corki, Doublelift was forced to fend for himself in teamfights. While CLG’s lane swap skill and bot-lane jungle focus would snowball Stixxay ahead, Doublelift had to play around Svenskeren’s solo-lane preference and YellowStar’s limitations in lane. Doublelift’s reliable Kalista play would continue in the playoffs, and he showed flashes of his old hard carry self in Games 4 and 5 in the CLG series on Caitlyn. These impressive performances on Caitlyn, in spite of a continued solo-lane focus by TSM, indicating that he could still turn to a damage focused playstyle while needed.

Regardless of how fans feel about Doublelift’s public persona or whether or not his teammates like him, it’s impossible to argue against Doublelift’s growth as a diverse player. By adding more utility focused champions, like Sivir and Kalista to his champion pools, shifting his focus toward team objectives over his personal economy and facilitating strong solo-laners, like Darshan and Bjergsen, Doublelift has proven time and again that, despite the resounding narrative, he no longer requires a ‘protect-the-Doublelift’ team composition to succeed. Instead, he is a player who can play both utility and carry roles in a variety of gold distributions. So while netizens and fans may point to memetic narratives, it is important to look deeper than surface level storylines and consider the most important factor of a player’s performance: what that player actually does in the server.