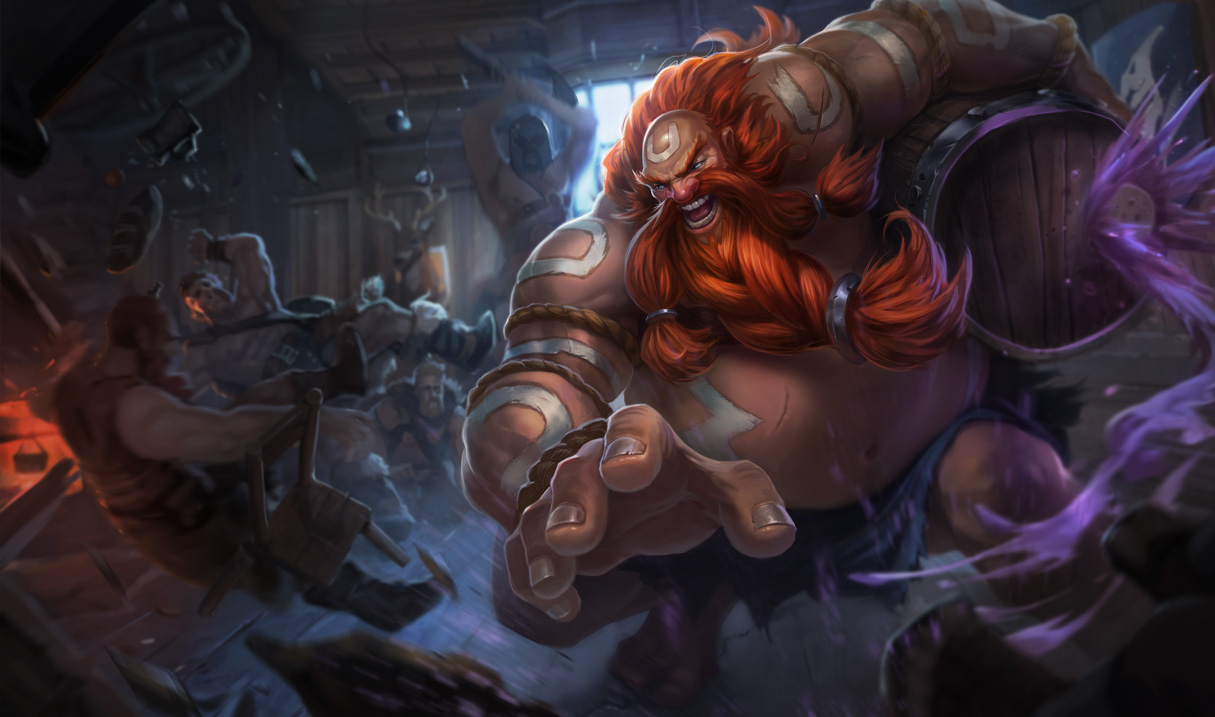 Following a bug in the original Game 2 of the FNC-EDG Quarter-Final Series of the Season 5 LoL World Championship, the champion Gragas was deemed to be susceptible to a game-changing bug. This bug concerned Gragas’ Q ability disappearing before it could be re-cast, and rendered the ability unusable even after dying and respawning. Because Riot did not want to risk having to remake future games, the top tier jungle champion has now been disabled for Semi-Finals and Finals.

Whilst Riot’s decision to disable the champion was perhaps inevitable considering the impact the bug could have, teams will have just 1 week to prepare new strategies without the highly-contested champion included. This will without much doubt cause a lot of trouble, as the Jungle is in a somewhat limited state regarding what champions are ‘viable’ or not.

With Gragas gone, there are only two other jungle champions remaining that are considered top-tier: Rek’Sai and Elise. Due to the advantage Blue side has in Pick/Ban, it may be that the Blue team bans one of Rek’Sai or Elise before snatching the other for themselves, leaving Red side at a significant disadvantage. This scenario thus asks the question of whether or not the four teams’ junglers will be able to adapt. We may well see them playing non-comfort champions; perhaps they will even bring new picks to the table in the wake of Gragas’ departure.

In this article I will discuss the four remaining junglers (Origen Amazing, SKT Bengi, FNC Reignover and KOO Hojin) and how I think this change will affect them, as well as their ability in upcoming games.

Of the four junglers still in contention for World Champion status, Origen’s Amazing is the one who has shown the most affection for Gragas. In the 37 games he has played in the EULCS Summer Split and in the World Championship, Amazing has picked Gragas 16 times in total. This means that Amazing has picked the fat man in 43.2% of all games, significantly higher than Bengi (18.2%), Reignover (15.8%) and Hojin (15.8%)*. This statistic alone shows that whilst all players suffer the effects of the disable, Amazing may well be the one who suffers the most due to his higher Gragas pick rate.

*Stats based on games in World Championship 2015, as well as LCK Summer or EULCS Summer respectively.

In the World Championship alone, Amazing has so far lived up to his high Gragas pick rate, having picked the fat man 4 times. Reignover has the 2nd highest Worlds pick rate with 2 Gragas picks; Bengi has picked him once, and Hojin has not picked him at all so far this Worlds.

Other options are available

Of course, just because Amazing is particularly fond of Gragas, this doesn’t mean it’s all over for him (or anyone) now that Gragas is disabled. Rek’Sai and Elise are still available, and both are strong picks, but even if both are banned out there are still other champions that have been played recently. Combining both the Summer Splits of EULCS/LCK and also the World Championship, the European junglers actually come ahead of their Korean counterparts when examining the number of champions picked. Over the course of the aforementioned competitions, Amazing and Reignover have each used 8 jungle champions, compared to Bengi and Hojin who have used slightly less at 7.

Though this alone does not say much, if these junglers have any special picks, any non top-tier champions which they excel at, this will surely help them. With Gragas gone, and Rek’sai and Elise probably banned or first-picked, proficiency on other less common picks will provide a valuable asset to any jungler.

First we have Origen’s Amazing. Once again it would appear Amazing suffers as he does not have any well known pocket picks, however he has displayed a lot of junglers in the Summer Split, such as Ekko or Lee Sin. Indeed, we may see Amazing’s Lee Sin once more, as he can be a strong champion in the right hands. It is however worth noting that out of the top 3 junglers, the only other that Amazing has played so far in Worlds is Evelynn, for 1 game, in which Origen lost to a seemingly-weak LGD. Fans of Origen may be hoping that Amazing has some secret pocket picks, because whilst he is clearly a talented jungler, his smaller champion pool might be the deciding factor in whether he performs or fails in his upcoming games against SKT. Although maybe we’ll be surprised…

In other news: Volibear is back.

Moving straight on, we have Bengi from SKT. Billed as a favourite for the World Championship, Bengi will be looking to impress no matter the circumstances. In the LCK Summer Split, Bengi played Evelynn a total of 12 times, and Rek’Sai a total of 11 times, contrasting with just 7 games on Gragas. He has only picked Evelynn 1 time so far in Worlds, but if he has to fall back on the pick, he has a lot of games behind it to back him up, the same for if he picks Rek’Sai. If that wasn’t enough, Bengi has picked the other top-tier jungler Elise a total of 6 times in just 9 games of Worlds, far more than the Rek’Sai or Evelynn. With a good amount of experience on both remaining top-tier Junglers, and a strong fallback on Evelynn if it can work into his team’s composition, Bengi should not feel too insecure of his abilities.

Fnatic Reignover is next on the list, and during Fnatic’s 18-0 Summer Split win-streak (and subsequent playoff games) he showcased numerous picks which he managed to work with. Perhaps most notable is Reignover’s Olaf, which he has picked 6 times in the EULCS Summer Split and already once in the World Championship. This pick could be the backup pick that Fnatic can fall back on if they do not get Rek’Sai or Elise (champions which Reignover also regularly plays). In addition to this, Reignover has in the past shown success with his Rengar, and whilst only picked once in all of the Summer Split and not at all in Worlds, it could be a pick that we see again.

Finally we have KOO’s Hojin. Hojin will perhaps be the least troubled by the disabling of Gragas as he has not played a single Gragas game in Worlds, and for obvious reasons will not play any more. Hojin has been playing both Rek’Sai and Elise (3 and 5 games respectively) and should theoretically be well-prepared to play these top-tier champions. In the event that Hojin does not get to pick either of the two, he also has 2 games on Lee Sin under his belt, which shows that he is not afraid to take the Lee should it be needed. In fact, all the other 3 junglers have only played 1 game each in Worlds so far where they did not use the ‘OP three’ of Gragas, Rek’Sai or Elise. Hojin has a very slight advantage, having played 2 games on a ‘non-OP’ champion and no games whatsoever on the now disabled Gragas. In terms of champion flexibility, Hojin may well be the winner here.

How impactful is a jungler anyway?

Having evaluated the impact each individual jungler might take, I have so far ignored the issue of how much this impacts their team. Some junglers do not have as huge an impact as others, some play a more farm-centric style whilst their strong laners do the brunt of the work, but some talented junglers conversely carry their weaker laners and help snowball across the map. In an attempt to judge the impact of the junglers, I have worked out their respective gold shares from their Worlds Quarter-Final games.

Whilst there was some difference, the gold shares remained very similar. The jungler who took the highest share was Amazing with 18.1%, followed by Bengi at 17.4%, Hojin at 17.3%, then Reignover at 17.0%. This statistic would suggest that out of the four, if Amazing suffered he would have the largest influence on his team as a result. This might have some truth to it, Origen likes to play around Amazing’s Gragas and his synergy with the botlane is not to be underestimated. Fnatic on the other hand have strong solo lane players in Febiven and Huni, and their botlane has proven in the past that it can be self-sufficient, and Reignover has at times adopted a more tanky role than a damage role recently. Despite this, however, I do not believe this statistic proves too much.

At the end of the day, the disabling of a common and top-tier champion will have visible effects, however I believe that all teams will have found new strategies in some form to play around the disappearance of the fat man. I think if I had to say who would be affected most, it would be Amazing, since it is well known that he likes to play Gragas and that it fits his team’s style nicely. Conversely, I would claim that Hojin will be least affected, as he has not played a single Gragas game up to this point and has shown with his Lee Sin that he is willing to try something different.

This does not mean that Origen are guaranteed to lose, nor that KOO will definitely win, as any player could step up on the day and play a fantastic set of games, and any player could pull out a pick that nobody could have expected. Statistics are just that, they can only tell so much, and while they are interesting to analyse, the games on Saturday and Sunday will be a true display of what the Gragas disable really means for the jungle. Only time can tell.