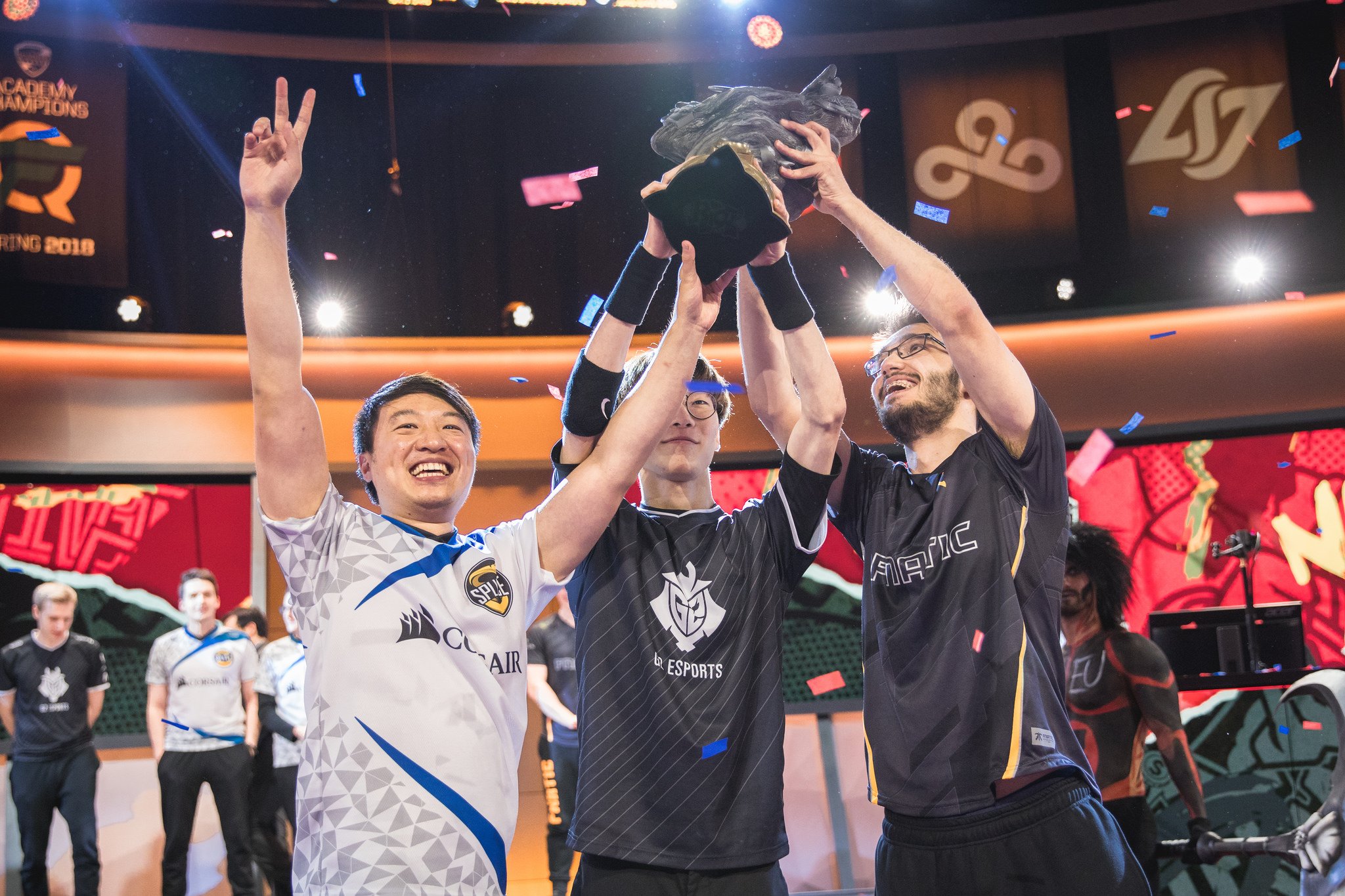 Rift Rivals wrapped up last weekend, and just like any other international event, it was jam-packed with disappointment for fans of the NA LCS. As it turns out, this region can’t even handle Europe, let alone the LPL or LCK when Worlds rolls around.

Jokes aside, though, the EU LCS put on a stellar performance. For all intents and purposes, they are certainly the better region. They look stronger than they’ve looked in years. Each of the region’s top teams have adapted to this new, creative meta in their own unique ways and seem more comfortable playing the game than ever before. This is a very promising sign for the future of the region, especially because they struggled immensely with finding an identity at Worlds last year, with the exception of Misfits and their Fervor of Battle Leona.

On the other side of the coin, North America’s faults were put under a magnifying glass for the world to scrutinize, as each team in attendance became a caricature of their known weaknesses and crutches. Whether it was Echo Fox embodying recklessness, 100 Thieves scraping by until end-game, or Liquid not knowing how to adapt, we were able to see it all up close and personal.

Without further adieu, let’s take a closer look what it really means to say EU > NA in the current competitive League of Legends scene.

The usual “EU LUL” meme has effectively been reversed. While it’s true that G2 Esports and Fnatic played out of their minds, it’s also unfortunately true that every single NA team at Rift Rivals fell short, even Team Liquid. It’s not all bad, however, because while it might not do much good, NA now has the chance to reflect on their obvious shortcomings in preparation for Worlds at the end of the season.

The best (or worst, depending your point of view) part of this event for NA is that they didn’t play uncharacteristically. It’s not like Echo Fox, Liquid, or 100T showed up at Rift Rivals and played in any weird or unpredictable fashion. They showed off the same strengths and weaknesses that they’ve put on blast every single week back at home. At Rift Rivals, against another region, it was just put under a brighter spotlight and that means that it will hopefully be easier to use as a learning experience.

For instance, 100 Thieves have won most of their games since they formed before the 2018 Spring Split, but they’ve always been considered underdogs simply because most of those wins have been anything but convincing. More often than not, they need to mount a comeback in the late-game using their veteran instincts and mechanics, but they often struggle earlier on when lane communication and proactive rotations are more important.

They can only get away with it at home because the NA LCS has more than a few teams filled to the brim with younger players. They lack those tried-and-true late-game mechanics and instincts. So, normally, as long as the enemy team doesn’t close the game out in 20 minutes sharp, 100T can start to mount a comeback.

Against the best teams of the EU LCS, they can’t get away with the same old bullshit. Not only are there veterans on almost every great team to match the late-game prowess of 100T, but they also know how to close out games when they get a lead. That’s something many NA LCS teams simply don’t know how to do.

Echo Fox knows how good they are

Echo Fox is in the same sinking boat, but they have a different hole to patch. In fact, their problem is almost the exact opposite. While 100T lacks laning power and individual carries, that’s entirely what Echo Fox is made out of.

That wouldn’t normally be a problem, aside from the fact that they seem way too aware of the fact that they’re really good. Top laner Heo “Huni” Seung-hoon and Kim “Fenix” Jae-hun play too forward, waiting for the first opportunity to stomp their lane opponent in a one-on-one.

While doing so, they leave themselves open to punishment, they blow resources that they’d normally need to escape an incoming gank, and they force aggressive map movements when they definitely don’t need to. Jungler Joshua “Dardoch” Hartnett does the same thing in the jungle, often advancing into enemy territory to counter-jungle without considering who might be waiting for him.

Again, they can get away with this at home where teams and less experienced players lack the knowledge to punish them. But put a top-tier jungler like Fnatic’s Mads “Broxah” Brock-Pedersen up against Huni and it all changes. Not only will he be ready and able to counter Huni’s over-extensions with strong ganks, he counts on it. Fnatic had Broxah hover the top side of the map through one of their games against Echo Fox. This showed that they studied Echo Fox, and they knew that Huni, who was usually their best player, could be turned into their greatest weakness.

What’s this Vladimir doing in my bot lane?

Liquid’s issue was less severe than the other two teams, but still indicative of their struggles at home so far this split and throughout much of the spring. They just can’t figure out the meta as fast or as confidently as other good teams. Teams like G2, Fnatic, and Misfits, who weren’t even at the tournament, seem to have a finger on the pulse of their team’s strengths and weaknesses.

When this certifiably insane meta rolled around, these teams were comfortable enough with their own style of play that they were able to look at certain strategies and methods and say “this seems like it would fit us well,” and then pull it off on-stage. Misfits identified that non-marksman bot lanes can be countered by high-damage solo-queue-style marksmen like Draven and an overly-aggressive support. They practiced it, and they’ve stomped teams with it every single time.

G2 knew that their strong side lanes would be able to swap roles and win lanes with support-style champions to boost a gold-funneled Luka “Perkz” Perković in the mid lane. Now, they’re the western masters of the funneling strategy, and at Rift Rivals, they proved that they have solid fallback strategies to rely on when funneling gold isn’t the correct solution.

Fnatic figured out after a week of play that their second top laner, Gabriël “Bwipo” Rau, was well-versed at many of the high-damage champions that had recently taken over the bot lane, and they threw him down there to immediately start working on his synergy with Zdravets “Hylissang” Iliev Galabov.

Liquid, on the other hand, have been struggling to hold on to the same strategies from the end of the Spring Split—Yiliang “Doublelift” Peng on a traditional marksman. This works at home because Doublelift is a very good bot lane carry, and teams seem to forget that they can ban Kai’Sa away from him way more often than you’d think. It took them roughly half of the Spring Split to develop their style, which was a lot longer than other teams. Their inability to adapt to a new meta and to new styles of play was again put on display against teams with varying strategies that had all been perfected and honed at the top of the split ladder.

Work on what you have

Misfits, G2, and Fnatic have figured out their strengths and team identity. They then take that identity and figure out how they can make the meta work for them. Liquid, on the other hand, seem to always zero in on figuring out which new strategies are correct, rather than work on what they do best.

Liquid are an aggressive team that excels with teamfighting comps and a traditional carry that can force the start of the teamfighting phase faster than normal. And yet, at MSI, it didn’t even look like they wanted to try playing to that style until they were already 0-4 in the group stage. By then, it was already too late.

At Rift Rivals, they tried playing to that style, but they have spent so much time at home trying out new things that it looks like they didn’t know how to handle using their favored style against other strategies, which was more akin to TSM’s issues at last year’s Worlds. They still put up a good fight and looked much better than both Echo Fox and 100 Thieves, but their weakness was still there, and it cost them.

By the time Worlds rolls around, hopefully these top NA teams will have worked out their issues. Echo Fox and 100 Thieves both have solid foundations and unique styles, they just need to even out their strategy by elevating where they fall short. Liquid, on the other hand, finally seem to understand what sort of pregame strategies work best for them. They just need to work on adapting those strategies to various situations rather than focusing on introducing entirely new ones.

Even if they don’t learn from their mistakes at all, though, the worst that could happen is they get knocked out of the group stage again at Worlds. And hey, at least we’re used to it at this point.