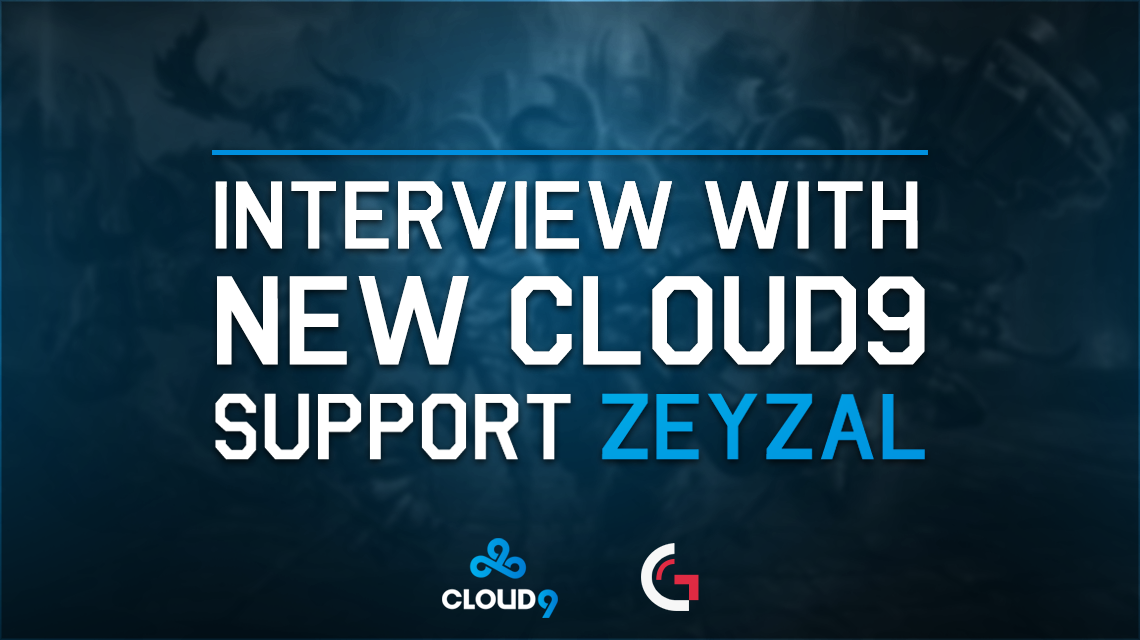 The Cloud9 League Championship Series roster has gone through some shakeups in the past few weeks, with Michael “Bunny FuFuu” Kurylo being moved to the bench, and Andy “Smoothie” Ta getting the full time job in the Cloud9 bottom lane. However, one change that flew under the radar for the most part regarded Tristan “Zeyzal” Stidam. Zeyzal joined the challenger series team as a substitute in the beginning of June, and has played behind Daerek “LemonNation” Hart until the recent wave of changes within Cloud9 saw him receive a promotion. Zeyzal is now the substitute support for the main Cloud9 LCS roster, backing up Smoothie. We sat down to talk with the new Cloud9 support, and got to know him a bit more:

What was your first video game?

My first computer game was Runescape, I started playing in 2005 when I was six. Previously, I played on the SN64 and the GameCube, games I don’t recall mostly, other than Kirby Air Ride.

How did you hear about/start playing League of Legends?

I heard about League of Legends through one of my older brothers. Basically, he began in beta and around season one when I started to branch out of Runescape, and he asked me to start playing League with him.

How long have you been playing League of Legends?

I originally started playing League at the end of Season One, which would have meant I was around 11 or 12 years old.

If you could become a pro in any other game, what would it be?

Definitely Hearthstone. The competitive scene is so interesting and I actually really enjoy the game and the knowledge it requires to be a pro player. Watching players make plays I would never have made, despite them seeming so obvious after they make it, always makes me pretty jealous.

Did you look up to any players when you first started in League of Legends? If yes, who, and why?

I actually looked up to a lot of players, but especially Zekent. Zekent was a Poppy only player who was high elo. His stats were insane and he later supported a bit for Team Curse. I always admired him for his great attitude and for what I thought was great play.

Were you always a support main? If no, what roles did you play other than that?

No, originally I was a top lane main during Season Two and Season Three, then later transitioned into a more supportive role. Back in Season Three in high elo, there was essentially no supports in Diamond, making it hard for me to ever get my role unless I mained support.

If you could not be a support, what would you be?

I would definitely be an AD Carry. I always admire their mechanics and some of the amazing plays they can make mechanically. It is just generally a more fun role to play, more pressure to perform and there is such an obvious difference in skill.

What made you decide to become a support player, a position that in League of Legends is not the most favorable?

Primarily, the lack of high elo supports, forcing me to play the role often. Honestly, I think it started out as a win streak on Lulu support, and I just decided to keep playing support.

Who is your favorite champion to play, and why?

My favorite champion to play is Twitch because his playstyle is really interactive and fun. The stealthing mechanic, as well as how well you have to position in order to succeed, gives him a level of difficulty a lot of supports do not have.

Who is your least favorite champion to play against, and why?

My least favorite champion to play is Riven. She is simply so strong when ahead and absolutely insane when players like Adrienaries or Boxbox are on her.

Out of all the seasons of League of Legends, which one was your favorite and why?

This is actually my favorite season of League. The lane swap meta allows less oppressive champions to be played and makes the meta a lot more diverse. I can play melee supports without getting destroyed in lane, or utility supports without losing much.

Who has been the most enjoyable AD Carry to duo lane with throughout your career and why?

I think the most enjoyable AD Carry I have duoed with was Maplestreet. He is a fun guy to be around and jokes a lot. I felt like he did not criticize mistakes too harshly and it made it very easy to grow as a player working with him.

What are your thoughts on the turret change that Riot will be putting out, effectively eliminating the lane swap?

I think it is really harmful for the meta, especially bot lane meta. It is going back to Season Two, where the entire game was oriented around laning phase and snowballing the game. It is a step back in strategic play for sure.

You can change two things about League of Legends right now, what are they, and why?

Open names in ranked drafts, that way one tricks are always target ban. I feel like playing with one tricks is generally unenjoyable, plus it would make the ladder much more competitive.

Also, ramp down a lot of the heavy mechanical champion’s damage and play potential. I think certain champions like Yasuo,Riven, Nidalee and Lucian have far too much carry potential in solo queue, which can make them pretty frustrating to play against.

Most memorable moment in your career thus far?

I currently do not have one; let’s hope my career lasts long enough to make plenty.

Who first contacted you about joining the Cloud9 organization, and how did they do it?

The first person who contacted me was one of the analysts, Jonathon. He basically ran a third team – the Challenger sub team. I was picked up as the support for that team while Maria was away on vacation in Brazil. I ended up becoming the main support for that team, and later the sub LCS support.

From what I understand, you are currently at home in Ohio. Are there plans to move to Los Angeles and stay with the team full time?

Currently, I am at my home in Ohio. There are no plans currently, but maybe that will change in the future. I went there for a bit to learn more about the team atmosphere and to visit the LCS studio, and I had a really great time.

What things have you learned since joining the LCS team?

I have learned a lot about how important it is to have a team that you trust and that trusts you and every decision you make. Also, I have learned the importance of a positive team environment, which can lead to a lot more improvement and healthy relationships.

Do you expect workloads or schedules to change now that you are on the main roster?

I do expect them to change, as I have already had to start playing seven to nine hours of solo queue per day. Previous to this, there was not a strict amount of solo queue I was expected to play, but I am definitely expected to upkeep my play more now that I have joined the main roster.

Which Cloud9 player/staff member has had the greatest effect on you, be it as a LoL player or human being?

Jonathon, the analyst that recommended me. He taught me a lot about playing the game and working as a team in general. He made me think more about every decision, and taught me some new philosophies I apply to all of my play.

What do you hope to achieve with the team?

I hope to achieve my own name, as well as the capability to be recognized as one of the best supports and not just as the Cloud9 LCS sub support. I have started working a lot harder to achieve this, and hopefully it will not be for nothing.

Team Instinct, but if a cute girl asks, probably always better to go with Team Valor.

Thank you to Zeyzal for taking the time to answer our questions, and good luck to you and the rest of Cloud9 for the remainder of the Summer Split.

Do you think Zeyzal will be a good substitute support player for Cloud9? Let us know by commenting below or tweeting us @GAMURScom.