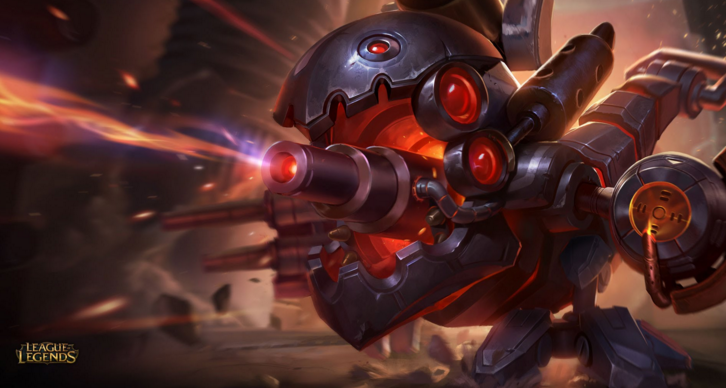 Alright guys, Kog’Maw has seen some screen time in the LCS, which is why I am writing about him.
Every time I see something in being played on competitive scene, I am baffled by how badly it is used, I was baffled by the Zz’rot usage from a couple teams last week, this week I am baffled at how badly Kog’Maw is understood as a champion.
I am also still waiting for my Galio pick, come on boys.
In this article we will be discussing the following aspects :
– Pro’s and Con’s of Kog’Maw
– Itemization and the value of items on Kog’Maw
– How to make your Kog’Maw perform in competitive

So, to start everything, what is a “Kog’Maw”?
It’s a machine gun adc, it’s a late game hyper carry that can win you the game if he does not die for 5 seconds. He is currently boasting the best winrate in plat and above.

Strength and weaknesses
What makes Kog super strong is almost entirely his W, Bio-Arcane Barrage, it’s a 6 second window during which you have to bail or kill him to not die. If you are in range, you will die. This ability has a 7 second downtime, this is his main weakness.
It’s almost like he has a reload timer, when his W is down, he can’t do much to defend himself.
His other weakness is his immobility, and also the fact that when deprived from speed-boosts, he isn’t able to clean up fights like a jinx, Tristana or others might when people dont funnel into his mouth.

Itemization
Nowaday, the correct way to itemize the baby baron is to go for on hit effects, thanks to the fact that his W doubles his AS, but reduces his auto’s damage to 55%. but also making him “break” all on hit items in the game.
By “break” I mean that all items in this game are budgeted to have a set price for a set of stats they give, but items like Sated Devourer break this type of items, and so does Kog’s W.

The correct way to start the game with him is to get a Cull because this will give him the sustain he needs to stay in lane, due to the fact that it gives back health ON HIT, and not a % of damage back through lifesteal.
We have seen Rekkless build it, and I got kinda annoyed by the casters blaming this whole early game on this first buy, a 5k gold deficit is a team effort xD 😉.
I really liked the following itemization from Rekkless this game, he got the pickaxe, but instead of dwelling on a blasting wand, he got a recurve bow to complement his lack of AS, THEN finished the Guinsoo’s rageblade, that should be your core item for Kog.

The go to second item is the Runnan’s Hurricane, remember when I talked about “breaking” items? This is the next best item to break on hit effects.

This item synergise super well with his W, the rageblade and the fact that Kog’Maw can destroys teams by himself. This will help him spread his on hit aids and 1v5.

Next item I want you guys to think about is the Wit’s End, this item is kinda considered a troll item, but hear me out on “h”it.

Wit’s End is an item that costs 2800 gold, for a total value of 2720 gold of stats.
But understand this : Kog’Maw’s W BREAKS on hit items by making them apply twice as much as they should, therefore you double the value of the 40 on hit damage from Wit’s End, giving it another 1000 gold value.
Dont forget you have a Runnan’s Hurricane, meaning sometimes you can apply that shit up to 30 times a second (WAIT WHAAAAT, 15×40=600 damage per second).
Another thing to keep in mind is the fact that it shreds up to a total of 25 mr from the targets you auto, AND the ones your hurricane hit, meaning you can also AoE shred 25 mr on 3 targets at a time, further increasing the damage of your ap damage dealers, and also your own. This item will also make Kog’s damage lean toward AP damage and away from AD damage. Keep this in mind.

Next item up on my watchlist if BOTRK.

This item offers a lot, healing for our little baby baron, AS, and on hit effect : 6% of enemies’ CURRENT hp, and a bonus active that let’s you get a little on demand speed boost.
These two items compete for a place in the mouth of the abyss’ inventory, and I think only one of them should fill an item slot every match.
If you face no tanks, and your team needs the shred, WE. If enemies are stacking HP, BOTRK.

I also want to talk about a broken item, even on it’s own : Maw of Malmortius.

This item is beyong broken, it’s cost efficient on it’s own, but when your health drops under 30%, you get this massive super sayan surge of power : lifeline AND lifegrip.
This item is 138% cost efficient when taken under 30%, not accounting for the shield it provides, that also scales with your MR Kappa.
So yeah, when you try to burst Kog Maw, you make him even stronger, he survives and you die.

This is one of my favorite composition in league of legends, and I feel like it is going to make a comeback on the scene (looking at you Rox Tigers!).
This comp is successful because it makes your Kog’Maw really fast and able to reach targets. It’s a comp that will take a lot of trusting from your adc to play in the front line to maximize the value of this team comp by making Kog the aggressor, and allowing him to play with his W up and run away when it’s down.

2- the protect the adc : a composition that focuses on protecting the Kog’Maw.
This is a comp that is fine by me and that we have already seen run by H2K week 6 day 1 and other teams. The one flaw I spot in this team comp is the fact that while it’s night impossible to dive in and kill kogmaw, it’s also hard for Kogmaw to kill you if you dont pile onto him… High mobility champs will not fight him on his terms, and only when his W is down, making it a flawed strategy. If you want to understand what I am talking about, watch H2K week 6 day 1, you will understand ;).

3- the come at me bro : a composition that has a secondary carry after the kogmaw. Here is Cloud9 making it work with a Tristana :)!
This composition focuses on giving you two bad choises :
-either you use a lot to kill kog, and the Fiora/Darius/Kayle/Illaoi cleans you up because you run into them and ignore them.
-or you do not use it all on Kogmaw, and he cleans you up.
What this comp features is an interaction between 2 threat, one that you need to dive and focus, and another that you need to kite and cannot ignore if you dont kite. Double edged sword ;).
I like this composition, and I wish Illaoi would see competitive play!

This is it for now, I can be reached at https://twitter.com/Mephisto_V, and I will answer further question at the speed of a Kog’Maw speed boosted by Lulu’s Whimsy ;).