All the teams have finally been drafted for the first Twitch Rivals League of Legends Draft Showdown after one of the most entertaining drafting processes we’ve seen, complete with some good analysis and better trash talk.

Some teams are looking extremely strong on paper, with various current and former pros having been available in the player pool. There were a few captains who drafted based off pure mechanical strength and experience, while other captains drafted based off of good synergy and familiarity.

Right from the get-go, there are two teams that stand out as possible contenders for the championship. For example, Tyler “Tyler1” Steinkamp’s team has plenty of firepower throughout his lineup, especially after having drafted jungler Tarzaned with the first overall pick of the draft.

The only problem with his draft is the team environment—there are plenty of characters that could possibly clash if things don’t go their way, and although it’ll be entertaining to watch, it might not be great news for their chances at winning. 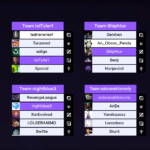 There are plenty of other strong contenders, though, including teams led by Hammoudi “Yassuo” Abdalrhman and Ashkan “TF Blade” Homayouni. Both have strong talent in most of their positions, and could easily find success throughout the tournament.

You can catch all the action when the Twitch Rivals Draft Showdown begins on Friday, Nov. 22 at 1pm CT.