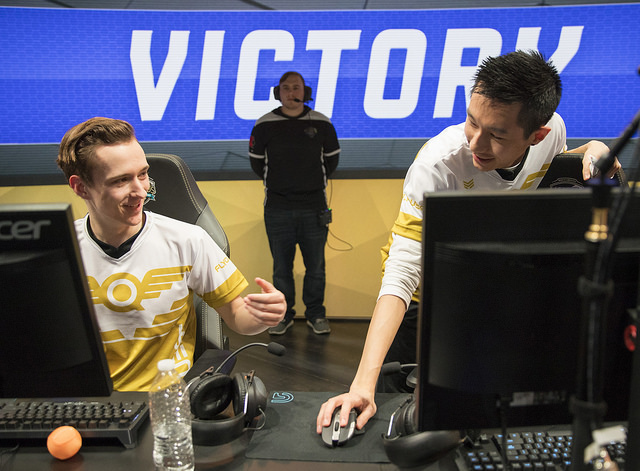 It was first on our Things to Watch list: How FlyQuest would compare against CLG, another team known for incredible strategic play. We now have our answer.

Despite the best efforts of coach Tony “Zikz” Gray and longtime shot caller Zachary “aphromoo” Black, CLG never looked like they were in last night’s series. Spurred by the strong communication of Hai Lam, FlyQuest won multiple lanes and flew around the map.

How is it that a team fresh out of the Challenger Series is dominating the League Championships Series (LCS), having defeated three straight playoff teams?

The first thing that stands out is the play of second-year jungler Galen “Moon” Holgate. Moon first arrived on the LCS scene a year ago as part of a much-hyped NRG roster highlighted by star solo laners Jung “Impact” Eon-yeong and Lee “GBM” Chang-suk. But Moon never found synergy with those players and was relegated to utility roles. He wasn’t much better after catching on with Team Liquid. He just didn’t seem to be an LCS-level jungler.

After being picked up by Cloud9 at the last minute, Moon has reversed that line of thinking in a hurry. He has displayed quick synergy, including picking up an extremely early First Blood against CLG mid laner Choi “HuHi” Jae-hyun in the first game. Within three minutes, he had reset the lane for Hai and taken control of tempo.

After backing and returning to the jungle, FlyQuest caught CLG jungler Jake “Xmithie” Puchero moving into position to gank top lane. It looked like Xmithie failed to get out of minion vision while he was sneaking into the top side bushes. Moon was on time for the countergank, killed his jungle opponent, and the game tilted even more.

But snowballing an early game lead can be difficult, and a misplayed chase near dragon turned into a triple kill for Xmithie. CLG clawed back to within a thousand gold of the lead. But Moon showed fantastic teamfight awareness on Kha’zix, not known as a teamfight jungler. He hopped in and out to great effect, finishing off priority targets, and in one late-game fight, dealing the most damage on either team. It is quite clear that this is the best Moon has ever played.

In game two, it was more of the same. With the bans focused on support and mid lane, Moon took Rengar into Xmithie’s Kha’zix. FlyQuest actually got a lead off a two vs. two outplay in the bottom lane, where aphromoo and ADC Trevor “Stixxay” Hayes looked completely out of sorts. Moon again spent most of his time around mid lane, ensuring that Hai could get a lead with which to roam. The play of the game came on a botched gank by Xmithie that was narrowly thwarted:

With that lead, the superior shot calling and communication of FlyQuest took over. FlyQuest consistently brought more members to fights faster, turning fifty-fifty situations into their favor. Moon was fearless leaping in and out of fights, and he had much more impact than Xmithie. Perhaps more importantly, the team showed that its side lanes could hold their own, with the duo lane notably playing well against a much more heralded opponent.

At the beginning of the split we wrote that FlyQuest could be a 0.500 team. They’ve clearly outperformed those expectations and continue to set the bar high. They’ve shown the value of coordination and synergy in a team-oriented game.

There’s still a chance other teams will catch up to FlyQuest’s level of communication and supersede them with talent as we progress through the split. But each day this team finishes on top of the league table makes that less and less likely. They are major contenders for the LCS crown.