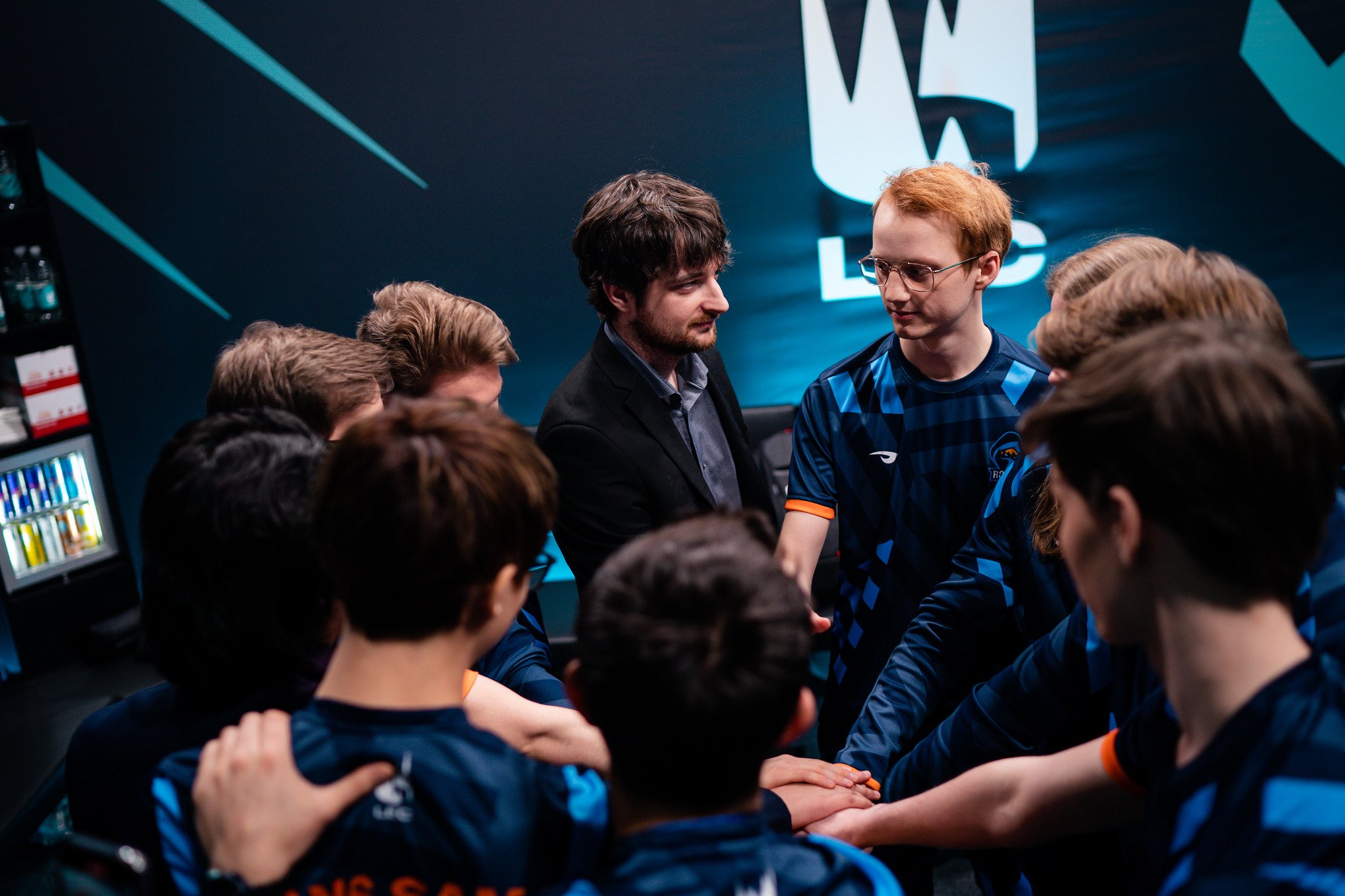 The buzzword for European League of Legends in 2020 has been “rookies,” and the youth of the LEC’s representatives at the World Championship has circulated as a global talking point. Following the underperformance of MAD Lions, which brought a quick end to their Worlds campaign, the pressure of rookie representation fell on Rogue.

With three players new to the international stage, managing nerves has been a key factor for this team, and nobody realizes this more than coach Simon “fredy122” Payne. A relatively young coach himself, he has been the backbone of Rogue’s development over their two years in the LEC. Fredy122 is finally beginning to see the fruits of his labor, with Rogue going from last place to first in the regular split and a Worlds qualification over their two years in the league.

Coming off a spectacular victory against play-in heroes PSG Talon, Rogue have demonstrated a level of confidence in their gameplay that was, for many, somewhat unexpected. “I would definitely say the players were confident going on stage,” fredy122 said. “And we didn’t really do too much out of the ordinary in terms of our normal pre-game routines.”

These pre-game routines are, for many professionals, an essential part of match days. They serve as a way to focus before matches and dispel any lingering jitters—something especially relevant for Rogue’s young lineup, many of whom were heading into their first international game.

“We’ve been doing a lot of managing of the rookies before the game: making sure they sleep well, eat well,” fredy122 said. “These are the things we as coaching staff need to help them on.”

The rookies in question are Rogue’s top-side trio, none of whom have competed internationally before now. With MAD Lions showing just how quickly a rookie team can fall apart under the pressure of the international stage, the worry for Rogue was that the experience of veterans Hans Sama and Vander would be counteracted by the nerves of these newer players.

This rookie management mentioned by fredy122 appeared to have been effective at quelling any nerves, with Rogue’s on-stage confidence propelling them to a 10,000 gold lead at 23 minutes in one of the day’s most one-sided games. Top laner Finn Wiestål, considered by many to be the weak link of this team, silenced his doubters with a stunning 2/0/10 Malphite performance, losing farm in the early game only to bring his team to victory through masterful teamfight execution. One of the most exciting parts of Rogue’s win was not the victory itself, but the participation of the team’s younger players in earning it. Mid laner Emil “Larssen” Larsson was the focus of the game, with Rogue’s bot side repeatedly roaming up to help accrue a clear mid lane advantage against Park “Tank” Dan-won’s Orianna.

Despite their dominance today, Rogue have a hell of a task ahead of them if they are to make it out of the group stage after being drawn into a group with Worlds Championship favorites JD Gaming and Damwon Gaming. With regards to the team’s matchup into these powerhouse teams, fredy122 was surprisingly confident.

“For sure I think we can win any game on any day if we go into it with a good draft and a good gameplan,” the coach said. “We’re not outmatched mechanically by the Chinese or Korean teams, so especially after this game I’m definitely optimistic going forwards.”

It’s very easy to look confident into a play-in team, however. Rogue will still have a lot more to prove if they want to represent Europe in the knockout stage. Matched into some of the best mid/jungle duos in the tournament in their group, mid laner Larssen and jungler Kacper “Inspired” Słoma will have their work cut out for them. Speaking on Rogue’s adaptation to the current meta, fredy122 said he believes the team plays well around its mid and jungle duo—comforting words in a meta dictated by early jungle pressure. On the subject of champion picks, he hinted that Rogue “got a lot of picks from EU that [their] opponents from other regions haven’t been using quite as much.”

These picks, most notably the Evelynn/Lucian combination piloted by Inspired and Larssen in today’s matchup, are often feast-or-famine champions that can decide the outcome of a match. They’re not the traditionally safe picks you would expect out of a young, nervous team, but Rogue are looking to make a splash in international waters. Following the Worlds success of Fnatic and G2 Esports in previous years, the heat is being turned up on European representatives. But where MAD Lions broke under the pressure, Rogue are looking to shine.

“For sure, we feel a little bit of that pressure, because we all want to reach what they’ve [Fnatic and G2] done at Worlds,” fredy122 said. “But at the end of the day, we’re a rookie team, and we’ve just got to manage our expectations.”

In terms of group stage matchups, fredy122 is most worried about JDG. Having scrimmed against the team once before the group draw, he confirmed one of Europe’s worst fears: JDG’s “crazy” map movement had thrown a wrench into the plans a normally incredibly coordinated Rogue, who are famous for playing by the book and lacking an ability to adapt. This failure to adapt came back to bite them against JDG, whose seamless coordination made it look “like they already know what they want to do a long, long way in advance of actually doing it,” a key advantage in a meta dictated by objective control. JDG weren’t able to showcase this aggression in their game against Damwon in today’s matches, but fredy122 believes the LCK representatives will be the most challenging of the two teams for Rogue.

Rogue are riding the high of their first win right now, but they may soon come crashing back to earth. The real test begins with their matchup against Damwon on Oct. 4 followed by JDG on Oct. 5.