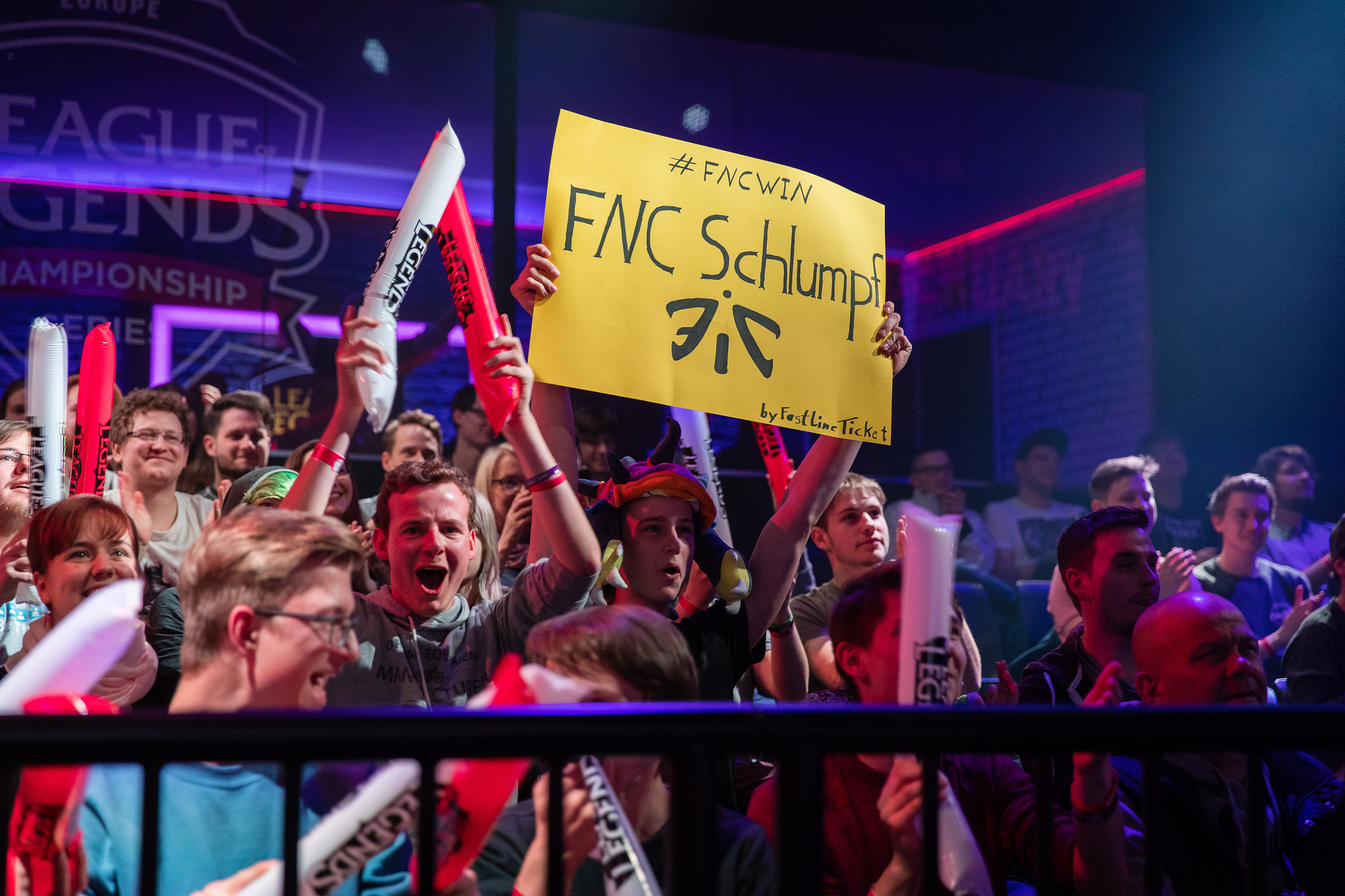 In Japanese writer Koushun Takami’s prized novel, Battle Royale, a group of students trapped on an island engage in a fight to the death that can can have only one victor.

Similarly, Group A in the EU LCS Summer Split has been a fight to the death between Fnatic and G2 Esports. The only difference is, the victor is preordained: Fnatic is locked into first place after G2 lost to ROCCAT on Thursday.

That doesn’t mean that the much-anticipated Saturday match between G2 and Fnatic isn’t important. For most of the last two years, G2 have been the class of Europe having wrested the title of “kings” away from Fnatic. That title, along with pride and playoff momentum will be on the line when these teams clash for the second time this split.

Who has the edge in this latest battle between royalty?

The biggest story of Fnatic’s season has been their up-and-down relationship with the meta. The started playing the meta without much more success than last summer, when they missed the playoffs.

Then, in a daring change at the end of the Spring Split, the team, and ADC Martin “Rekkles” Larsen in particular, said “screw it.” Playing what they described as “animal style,” they stuck Rekkles on a splitpush Kennen and played an aggressive pick comp around him.

That surprising style almost gave them an upset against G2 in the spring playoffs. In multiple games, they seized control of the early game before missed rotations eventually let G2’s scaling teamfight compositions make a comeback.

They amped that style even higher at the start of Summer, and this time, were able to beat G2 with Rekkles popping off. But it was stopped in its tracks in the middle of the split at Rift Rivals.

Fnatic’s flaws were exposed by the North American teams, who should have been less familiar with their style. Moving Rekkles around and letting him split push forced Fnatic to trade sides of the map when he couldn’t outright win his two-on-two lane. Fnatic ceded drake after drake to NA teams because of bad duo lane matchups. Their dragon control is top in their region, but against NA duo lanes, FNC fell apart.

Meanwhile in mid lane, aggressive mid lane roams by NA teams shut down Caps and opened up the map. Fnatic’s pick comp could not stand up to the brute-force, tower-be-damned dive comps that their NA opponents used. Ceding mid lane priority meant giving up large swaths of the jungle as well, which rendered Rekkles’ split pushing ineffective.

Fnatic’s animal style was chained up.

Getting back to carries

Needing something new, Fnatic came back to the meta. Rekkles’ support, Jesse “Jesiz” Le said in an interview with Slingshot Esports that after Rift Rivals, the whole team, including Rekkles, decided to play more meta. Rekkles will still pick Tristana since she’s now meta, but the Kennen is gone in favor of champions like Varus and Ashe.

That has had trickle-down effects on the rest of the team. Jungler Mads “Broxah” Brock-Pedersen has toned down his selections of early-game champions like Elise, Lee Sin, and Kha’Zix in favor of scaling teamfighters like Gragas and Cho’Gath.

With teamfight-oriented comps, Fnatic has learned to turn multi-man engages back on their enemies. In Week 7 against Unicorns of Love, Fnatic was down a game when this fantastic teamfight got them back into things:

Fnatic had a comp full of CC and engage and layered their spells beautifully to lock the Unicorns down.

Can this team continue to evolve?

After storming through much of summer, Fnatic were expected to carry a lengthy win streak into the match against G2. But on Thursday, they, too, were upset by a team at the bottom of the table—Ninjas in Pyjamas.

Maybe Fnatic lost focus, knowing that the game didn’t mean anything. Maybe they were looking forward to G2. But the loss to NiP did reveal cracks in the foundation that should not exist. With an immense gold lead and all enemy structures down aside form the nexus, Fnatic inexplicably forgot how to macro and lost.

Part of the problem was a return to an extreme splitpush team composition that made it very difficult for Fnatic to fight. Elite teams can figure out how to play different styles and avoid situations where they’re boxed into a corner. With the adjustments that G2 will inevitably make, Fnatic need to show that they can be flexible and win with different styles.

After going over a year unbeaten in the EU LCS, G2 has lost four times this split, including their most recent embarrassment against ROCCAT. And that doesn’t include their five losses at Rift Rivals.

G2 loves playing scaling teamfight compositions that take advantage of their superior late game coordination. It can be boring to watch sometimes as they roll toward the enemy Nexus unopposed, since fighting them is insane.

Earlier in the split, G2’s lack of map control in the early game led to uncharacteristic losses. But over the last few weeks, the team looked to have solved some of those issues—until their loss to ROCCAT revealed new ones. It’s like play whack-a-mole in terms of things to fix.

ROCCAT came back via late fights that they executed more cleanly than G2. G2’s issues start with the player they have relied so much upon to start those fights: Jungler Kim “Trick” Gang-yun.

Trick was universally proclaimed the best jungler in the region last year, winning MVP in both splits. This year’s Spring Split was also successful. But since then, the wheels have come off.

The first signs came at the Mid-Season Invitational. Trick’s pathing was exposed and team’s punished him for senseless invades. Sometimes it looked like he was straight feeding.

Teams seemed to have figured out more of Trick’s tendencies over time. He’s being punished more for focusing on vision and farm in the early game. Teams just aren’t scared of him anymore, knowing that he usually requires help from the rest of the team to set up plays.

The good news for G2 is that the other players continue to step up.

As G2 struggled at international tournaments last year, the most disappointing player was mid laner Luka “Perkz” Perkovic. Perkz has the talent to hang with top mid laners worldwide, but a series of mechanical misplays invoked a heap of criticism.

Perkz has fixed a lot of those issues this year, playing safer and respecting his opponents more than he has before. He’s good enough that he doesn’t have to take risky trades to exert pressure in the mid lane.

That explains why he has died only 55 times all split, third-best among regular mid lane starters. In fact, Perkz is the only mid laner that ranks in the top five in both deaths and kill participation.

G2 have become more emboldened at playing around Perkz’ lane and using that as a fulcrum to break open the rest of the map, similar to what NA teams did at Rift Rivals. They’re the European team that has shown the most ability to adjust and react, and that’s a big part of why they’ve been so successful.

Who finishes on top?

The fact that both teams lost in puzzling fashion heading into the weekend makes predictions tough. It’s possible that we’ll see more of an on-stage scrim on Saturday, with both teams hesitant to reveal too much of their playoff strategy while learning the new patch.

Still, they should take things seriously, as the winner will send a clear message to the rest of the league. There’s a lot of pride on the line, even if the outcome won’t affect the standings. Given how much the meta has changed in the last few patches and how lost Fnatic looked today, the edge goes to G2 to be the better team at adapting in this match.

Whatever happens, here’s hoping we see more from these two teams in the form of a best-of-five meeting in the playoffs.