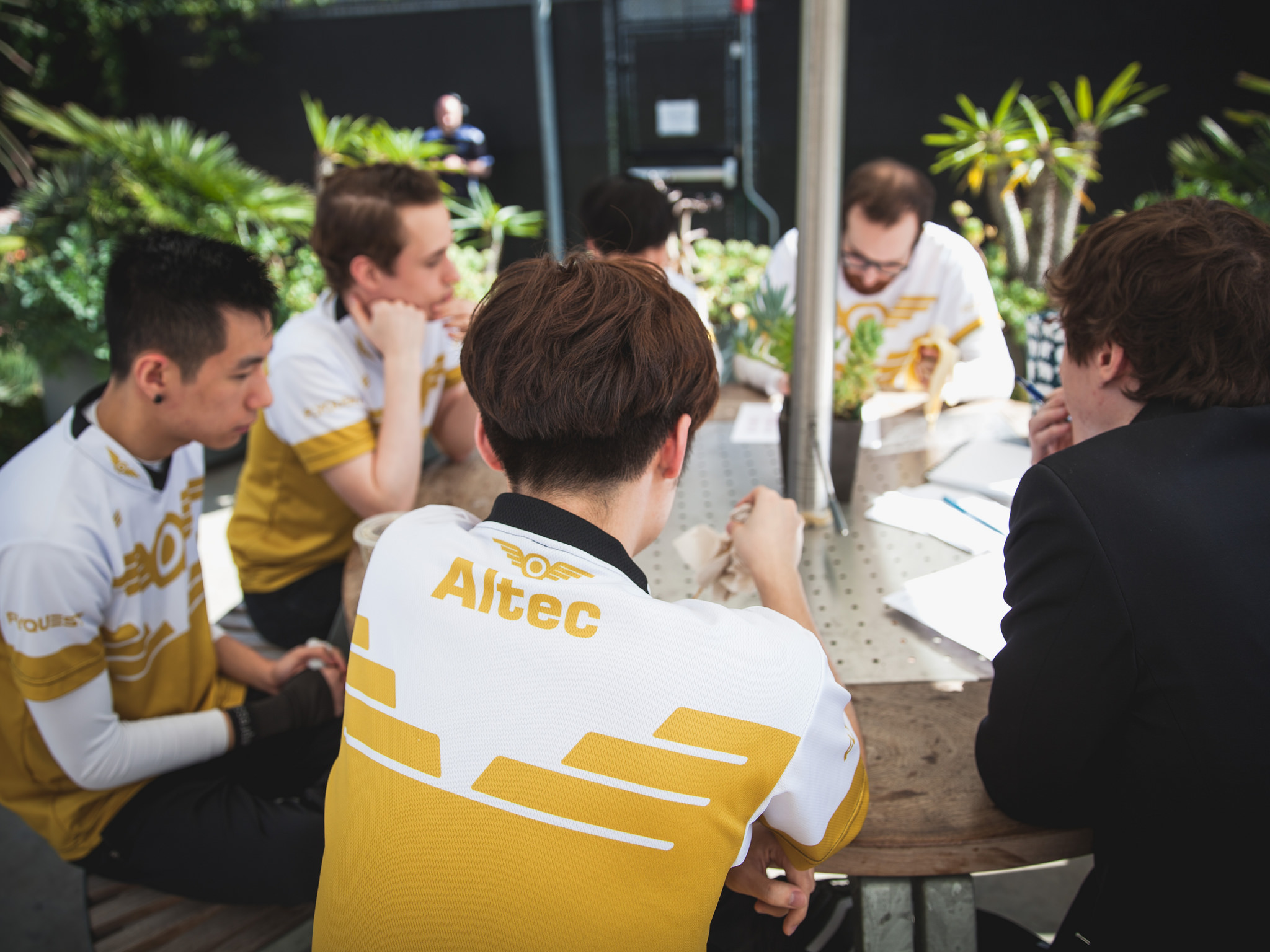 FlyQuest started the split strong and looked like they could challenge TSM and Cloud9 for the NA title. But an unlucky loss to Cloud9 in week four set FlyQuest into a funk. The team is only 1-5 since, with their only match victory coming against Team EnVyUs—the worst team in the league.

So what is going on? Was their 5-1 start a red herring, with wins coming against the weaker teams in the region? Has the meta been unfriendly to players with limited champion pools? Or is this a case of teams simply figuring out how to play against FlyQuest?

Ultimately, it is a combination of all those factors that has shot FlyQuest out of the sky.

Strength of schedule was one of the first obvious factors when examining FlyQuest’s first match with C9. Up to that point they had not beaten a team with a winning record, and since that point three of their six matches have come against upper-echelon teams.

But that doesn’t explain everything. If opponent strength mattered, FlyQuest wouldn’t be losing to teams like Dignitas in week five or Immortals yesterday. The Immortals loss was especially disconcerting. Unlike Dignitas, who have looked rejuvenated with a recent coaching change, Immortals carried no momentum into that match. They had lost to Liquid and EnVy the week prior, both crushing defeats to last-place teams.

But Immortals made short work of FlyQuest, racking up a combined 41 kills in the two games to only 8 deaths. The first game finished just shy of 34 minutes and the second was even more of a catastrophe for FlyQuest, ending in less than 26 minutes.

No matter how you look at it, with games against talented squads like TSM and CLG coming up next week, FlyQuest have their work cut out for them.

This is also a hard subject to analyze when it comes to FlyQuest, primarily because they have an extremely unique view of the meta. They are the only ones in the world who think a double-tank bot lane with Mordekaiser as the ADC can work in competitive play.

Then there’s jungler Galen “Moon” Holgate. Moon has put in work on meta champions like Kha’Zix, Rengar, and Graves, but was also known for his Evelynn play earlier in the split, and more recently, for Shaco. He was 2-1 on Evelynn but his Shaco has been a disaster.

The pocket picks don’t stop there. Johnny “Altec” Ru is pretty much the only North American ADC that thinks Miss Fortune is viable, Moon had a game on Kindred, and An “Balls” Le had a random Swain game in the top lane.

One trend that opponents must have figured out by now is FlyQuest’s draft strategy towards mid lane. As their primary shot caller and often the primary carry, mid laner Hai Lam needs a winning lane. He makes FlyQuest’s strategy go—if he can’t pull of his signature roams, FlyQuest’s side lanes often fall behind. So FlyQuest often reserve their mid lane pick for the second half of the draft phase to ensure that Hai has a good matchup.

As teams started exploiting that tendency, FlyQuest has started to look shaky.

The turning point for FlyQuest was that first series loss against Cloud9. Cloud9 showed the world that FlyQuest’s late game is questionable when they don’t have a snowball going and that Hai and company can be baited into some questionable fights.

But the series that may have really affected them was the next one, against Dignitas. FlyQuest thought they were being clever—after picking Vladimir, presumably for mid lane, with their penultimate pick on red side they swapped him to the top lane with Hai grabbing Jarvan IV instead.

In response to the Vladimir pick, Dignitas went with Zed for Jang “Keane” Lae-young. Up to that point, Keane had exclusively played mages like Corki and Ryze. But perhaps as a counter to Hai, Keane took the assassin, his first game on Zed all split. At first, it looked like Hai was in control. He shoved Keane around and built a tempo advantage. Dignitas started off with a double kill in the bot lane off a nice counter gank by Lee “Chaser” Sang-hyun, but FlyQuest was still in it.

The problem was, Hai wasn’t able to take advantage of the tempo. Keane kept him from roaming, which allowed his duo lane to slingshot ahead. His top laner was behind, but since Kim “Ssumday” Chan-ho was playing a tank, he’d be useless regardless of the gold deficit.

Hai would do better in the second game on the same matchup, but Dignitas got a fortuitous Baron and had a superior teamfight comp. More importantly, teams started using the Dignitas draft as a template for beating FlyQuest. It’s an awkward draft—it combines early game power to match Hai’s strengths with a tank and crowd-control for late game fights—but it’s effective.

Since that match, Hai has seen a steady diet of assassin picks against him. Ekko, Talon, Ahri, and Katarina have all come out from opponents.

Where do they go from here?

Hai likely does not have issues playing into any one of these picks, it’s possible that the sheer diversity of picks against him are forcing him into matchups he isn’t as prepared for. As the matchups have gotten increasingly complex, Hai’s effectiveness has declined.

That has had ramifications across the roster. Balls can be a good split pusher, but his laning numbers are at the bottom of the table. He needs help to get ahead. Same thing for Altec, who was absolutely bodied by the Immortals duo lane of rookie Cody Sun and NA newcomer Kim “Olleh” Joo-sung.

This was a worry for FlyQuest coming into the season—that they would beat teams based on team play and superior coordination, but some of these players just don’t have the mechanics to keep up without significant help. If the Hai and Moon combination isn’t providing that help, the side lanes can fall terminally behind. And as other teams start working on their communication and execution, even FlyQuest’s strengths become diminished.

Unfortunately, these issues aren’t going to be easy to correct. You can’t really improve someone’s mechanics so late in the game. What they can do is limit the range of mechanics the players have to express—limit the champion pools so as to improve execution. That will make the team easy to read, but also fundamentally stronger. That, along with cleaning up the late game, can get them closer to where they need to be.

FlyQuest has easier matchups in three of their last four matches—this is still a playoff team. And it’s dangerous to doubt them after seeing their incredible start to the split. But it’s hard to imagine this team making a serious run at things, not against the likes of C9 or TSM.

This group of wily veterans has proven a lot of pundits wrong, but it will take another miracle for them to continue their run.