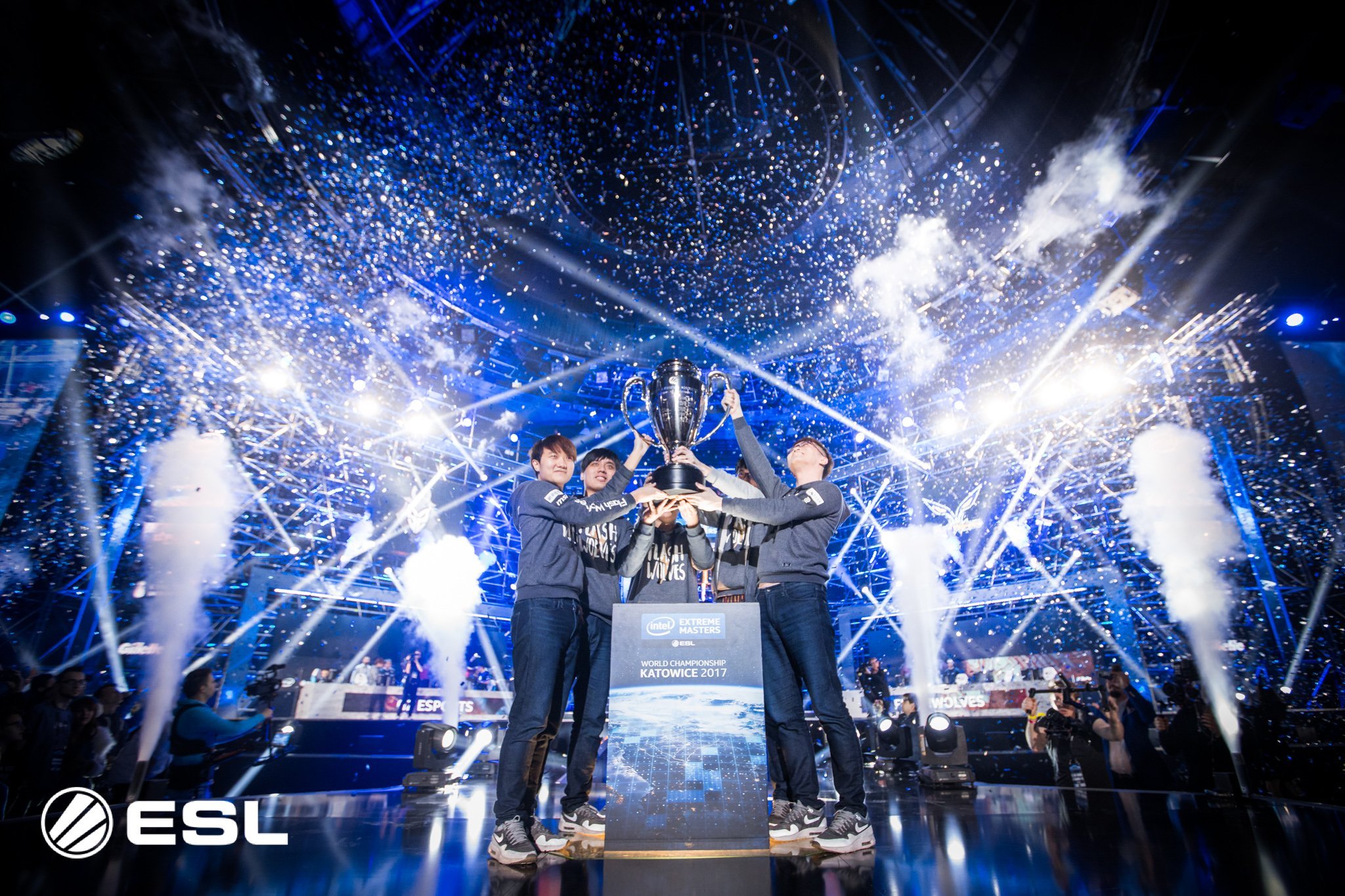 Despite hours worth of delays and pauses due to technical issues, the final day of Katowice was one to remember. G2 Esports and Flash Wolves survived the semifinals against ROX Tigers and H2k-Gaming respectively, and Flash Wolves put on a dominant display in the finals to take home the trophy.

Within the first six minutes of game one, technical difficulties forced G2 to bring in new computers for two of their players. The game was paused again two minutes later. Just over an hour and a half later, following PC swaps and a test game, the two teams were back on the rift with the same draft. By the 18-minute mark, ROX was up by 5,000 gold and had taken the Rift Herald. Despite Son “Mickey” Young-min’s early struggles, ROX kept hold of the game, winning several skirmishes and pressuring around the map. Around 38 minutes into the game, Heo “Lindarang” Man-heung distracted four members of G2 on the bottom side of the map while the rest of ROX took down the Baron. A minute later, ROX secured the Baron while fighting in a four-on-five because G2 jungler Kim “Trick” Gang-yun did not have smite available. By the 44-minute mark, ROX held a 14,000 gold lead. Minutes later, that lead was 20,000 gold and ROX took down the Baron just after it respawned, pushing into G2’s base for the win.

G2 started game two off strong and never looked back. Trick’s first blood on Mickey blew both of the enemy mid laner’s summoner spells, and gave Luka “PerkZ” Perković an assist and the lead in lane. This game was full of close skirmishes, but G2 always came out on top. Many fights centered around the mid lane, with Trick and PerkZ out-dueling ROX at every turn. G2 continued to outplay ROX, taking kill after kill and objective after objective until there was nothing left to take. Leading by 10 kills, 9,000 gold, eight towers, and three dragons, G2 took game two in just over 33 minutes.

There was a long delay between games two and three, as G2 players were still experiencing issues with their computers. According to G2 founder Carlos “ocelote” Rodríguez Santiago, the players decided to play on.

That did not stop another pause just minutes into game three, but play quickly resumed and ROX led by 1,500 gold after seven minutes. ROX quickly won a three-for-zero fight, and things were looking bad for G2 until Ki “Expect” Dae-han managed a solo kill on Mickey. ROX pushed back, and while G2 went for the Baron just before 26 minutes, Yoon “SeongHwan” Seong-hwan jumped in, got the steal, and jumped out. At this point, ROX led by 7,000 gold and already had five towers, as well as a Mountain Dragon. ROX made good use of the Baron, taking the tier two and tier three towers in G2’s top lane. While the Baron respawned, ROX made the decision to go for the Infernal Dragon. G2 saw their chance, rushed the Baron attempt, won a fight three-for-two, and inched themselves back into the game. Not much happened with G2’s Baron buff, as it quickly wore off and ROX pushed in again. ROX pushed for an inhibitor, but G2 showed no fear and went for the engage, taking two kills. Immediately after, G2 took the Elder Dragon, another two-for-zero fight, and the Baron. By the time the Baron buff wore off, G2 had already done what they needed to do, taking towers and leveling out the gold. ROX attempted to rush the next Baron, but G2 was ready, taking a three-for-zero fight and the series victory.

A slow start to game one saw only two kills for Flash Wolves and two dragons, both Infernal Dragons, for H2k in the first 20 minutes. The gold was even, and H2k had the lead due to the double Infernal Dragons. For the next 16 minutes, the game remained slow and the focus was on macro play. H2k controlled the map and vision, taking two towers in the mid lane and an Ocean Dragon. Flash Wolves then caught out Fabian “Febiven” Diepstraten in the top lane and took their first top lane tower. H2k responded minutes later, taking the Baron before Flash Wolves could do anything about it. By the 40-minute mark, H2k was using their Baron buff to siege in the mid and bottom lane, and took Elder Dragon. H2k did not push very hard, and did not get very much off of their buffs. Around 45 minutes in, H2k took two kills and the Baron, while Huang “Maple” Yi-Tang shoved in the mid lane and took three of H2k’s towers. H2k responded, taking the top lane inhibitor, but Maple managed to kill Marcin “Jankos” Jankowski and take H2k’s mid inhib. After H2k took the mid inhibitor, things slowed back down and H2k held its lead, trading one inhibitor for two. After another slow siege, H2k took the Elder Dragon at the 51-minute mark. Flash Wolves, after losing all of their inhibitors, won a fight in their base and moved to take the Baron. Flash Wolves took control of the tempo for a majority of the rest of the game, but a good fight from H2k finally ended the game in just under 64 minutes.

Game two, unlike game one, was filled with action. H2k obviously had a plan to make fights happen, drafting Maokai, Ivern, Ryze, Sivir, and Nautilus. A quick first blood for Sin “Nuclear” Jeong-hyeon on Hung “Karsa” Hau-Hsuan put H2k in the lead early, and they kept control for the rest of the game. Kill after kill and dragon after dragon, H2k built their lead up to just over 4,000 gold by the 31-minute mark. A few minutes later, H2k lost a fight but managed to sneak the Baron take, setting up a siege in all lanes on Flash Wolves’ base. With the map control, H2k set up vision everywhere and took the Ocean Dragon. One teamfight was all Flash Wolves needed, acing H2k in a five-for-zero, storming down the mid lane, and winning the game in 45 minutes.

Eight minutes into game three, Andrei “Odoamne” Pascu was ganked in the top lane and gave first blood to Karsa. Like game one, this was a slow game. Regardless, Flash Wolves had slow control in the game, leading by 2,000 gold, three kills, and one dragon. Flash Wolves won a three-for-one fight just a few minutes later, and used that momentum to take down H2k’s mid lane inhibitor and the top lane inhibitor tower. Flash Wolves attempted to rotate to the Baron, but H2k won a three-for-zero fight and stayed alive in the game, taking the Baron. Failing to capitalize on their early game team composition, H2k’s chances of winning were worse and worse the longer the game lasted. Flash Wolves slowly and methodically made their way into H2k’s base, takings kills, towers, and inhibitors en route to a 46-minute win.

ESL representatives and G2 worked together to check on the PC issues during the series between Flash Wolves and H2k, seemingly finding the fix.

Yu “MMD” Li-Hong overextended early in game one, and gave first blood over to Expect and Trick. Getting vision of Trick on the opposite side of the map a few minutes later, Flash Wolves made a quick play to secure the Ocean Dragon. MMD was caught out again, as Expect grabbed the kill and the first tower of the game. Expect was given the Rift Herald buff, while Flash Wolves rotated to pick up a Cloud Dragon. Despite being given LeBlanc in the draft, PerkZ struggled to make a major impact with the highly sought after champion. Flash Wolves grabbed their third dragon of the game, this time a Mountain Dragon, at the 24-minute mark. G2’s 1,000 gold lead meant nothing at this point because of G2’s objective control. Another fight at the 27-minute mark gave Flash Wolves a four-for-zero and the Baron. Flash Wolves pushed with the Baron buff, taking the bottom lane inhibitor. Another teamfight left PerkZ as G2’s only line of defense, as Flash Wolves forced their way into G2’s base and won the 32-minute game.

G2 four-man ganked the bottom lane seven minutes in, picking up the first two kills and first tower of the game. Shortly later, a three-man gank in the mid lane gave PerkZ a kill on Maple. G2 held early control for the most part, but gave away a 50/50 Mountain Dragon to Karsa and Flash Wolves. At the 20-minute mark, Flash Wolves won a four-for-zero fight and immediately rotated to take the Baron, holding a 3,000 gold lead. Using the buff, Flash Wolves pressured across the map, taking tower after tower, and two inhibitors. The last few minutes of the game were pure domination from Flash Wolves, as the LMS squad claimed the IEM Katowice championship.

What did you think of IEM Katowice?