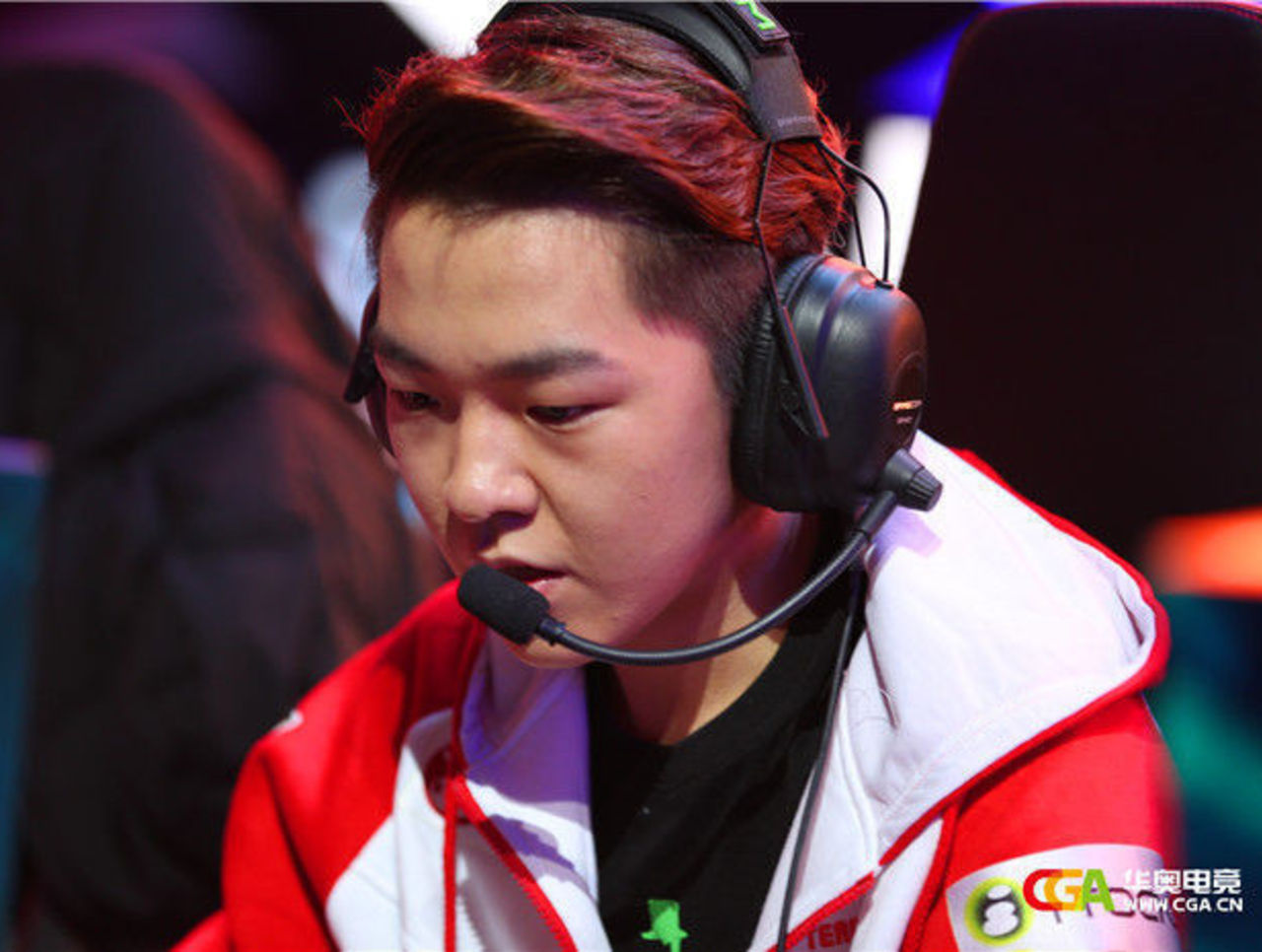 Touted as the world’s best by nearly every respectable analyst in the E-sports scene, the GE Tigers came into the semi finals with one thing on their mind: TSM. After all, they had declared their desire for an undefeated run, and had not dropped a game thus far. Even TSM’s Lustboy declared emphatically that they would be the ones to take GE down. It was all but decided that the IEM Katowice Grandfinal would be a showcase of two regional juggernauts, a clash between the sole North American hope and the seemingly unbeatable Koreans. Yet GE tigers were so consumed by thoughts of grandeur and their supposedly inevitable destination, they overlooked their current opponent: World Elite. A team considered by many to be on the weaker spectrum in the tournament brandishing a 8-22 record in the LPL, and primarily composed of solo queue players. A rag tag team of individual talents who lacked the basics of fundamental team play, relying heavily on solo plays, there was no doubt that World Elite would be eliminated in a Best of Three. Sure they could beat a few teams here and there in Best of ones, but in a prolonged series, their weaknesses would show,and they would not be able to succeed with any real consistency. After all, history has shown us that teams loaded with individualistic talent required time in order to mesh well with each other; Alliance comes to mind here.

So, how in the world, did the GE Tigers manage to lose this series? Conversely, how did World Elite manage to win it?

Act One: Order vs. Chaos

As the teams entered picks and bans for game one, it would be interesting to see what GE would ban against WE. Do they focus Xiye, their star mid laner, or ban out Spirit’s pressure junglers? GE ended up hitting WE’s pocket pick team comp and banned out Diana, Jarvan 4, and Sivir. By banning out these vicious team fighters, GE saved themselves the worry of having to go against WE’s simple, yet effective, hard-engage team fight composition. The results were clear; GE’s bans had a noticeable effect, as WE opted for a very solo queue style composition, arming its players with a handful of high skill cap play making champions. Most notably, Xiye was able to lock in his much practiced Leblanc, and Spirit was given the opportunity to play with one of the most impactful early game junglers, Lee sin. GE opted for a more team-oriented composition, picking Reksai, Janna, Corki, Ezreal (mid), and Rumble.WE wanted to snowball the game ala classic solo queue, and GE picked the perfect composition to prevent that by selecting multiple escape carries, and securing Janna, known for her infamous peel
abilities.

Game one played out nearly identical to the pick and ban phase. WE stomped early, with Spirit aiding Aluka in getting their team a first blood advantage, and Xiye solo killing kurO in the mid lane. Securing objectives and kills, WE seemed to be poised for the game one upset. Spirit showed his mechanical prowess with a catch on kurO in the midlane, emulating the infamous Insec kick. After securing the mid tower, the teams reset and look towards the dragon pit. An untimely back by WE gave GE the time to get into position to contest dragon. In doing so, GE found an opportunity to fight WE. Although the skirmish ended without any deaths on either side, GE came out on top, burning a few WE ultimates (Maokais and Thresh’s) as well as inflicting some noticeable damage onto Spirit’s Lee sin and YuZhe’s Thresh. Securing dragon, GE looked to move bot lane and pressure the tower there. At this point in the game, WE still retained a gold lead of 2.8k, and planned to pressure the map with their pick and push comp. However they were met with the notorious GE mid game power-spike. Facing off in the bot lane, WE’s YuzHe lands a hook onto Smeb, who in retaliation fires off his ultimate, setting up GE’s Pray for a kill on Spirit, and securing a kill himself. WE’s misfortune does not stop there however, as their outnumbered and mis-positioned team looks for an opportunity to fight what was effectively a 2/3v5. As expected, GE tigers pounced onto the opportunity, sank their teeth into WE’s throats, and never let go. The methodical play continued to crush the unorganized stars of WE, ending in a victory for the world-renowned team.

Act Two: The Beginning of the End

Perhaps it was because GE had won so convincingly in game one. Maybe kurO wanted to avenge himself after his humiliating death by Xiye’s leblanc in the head to head match-up. What we know for certain, is that something was amiss when GE locked in Yasuo, a champion they had not used in recent history. A champion who kurO was not particularly known for, and yet it was selected. Not only that, but GE had locked in a Yasuo centric composition, with setup from Nami and Lee Sin, by means of their ultimates. GE planned to win by means of an outdated and unused Yasuo composition. Even worse yet, GE picked Yasuo against a hard initiate composition whose carries could easily avoid the obvious Yasuo setup. GE wanted to win with team play as they had done in games prior, but they wanted to do it with style. In doing so, they turned a constant into a variable, would there be an indefinite mid game spike? Could GE stop WE’s strong laning phase and snowball mentality? GE not only underestimated their opponent but they overestimated their own capabilities and it showed. Their team-fights were executed poorly, simply being unable to correctly chain ultimates proved disastrous. Losing a critical fight near dragon pit set WE 3k gold ahead similar to game one, but this time GE’s signature turnabout style was nowhere to be found. Pulling the trigger at their second tier bot tower nearly twenty six minutes in resulted in a crushing loss. Forcing the issue again, was GE’s Lee who desperately attempted to set up kurO’s Yasuo, resulting in a split-up GE attempting to salvage a bad situation, only to be clean aced. WE went in the game looking to snowball, and snowball they did, steamrolling GE.

After the loss, the camera showed a rather gleeful GE as opposed to the usually gloomy and visibly upset competitor. One could surmise that perhaps GE were simply toying with WE, that they were in fact in control of this series. They had (had) their fun last game, and now they would return to their previous standing as consistent and ever adapting monsters.

These people would be horribly mistaken. WE came into this game looking to ride the high off the last game, they defeated GE once, they could do it again. Picks and Bans this time around were more standard on the side of GE, nothing too out of the ordinary. Their shot calling however was a tad off kilter. Setting the pace with an aggressive mid lane gank, Spirit reminded us again why he is probably the greatest jungler in the world today. Investing both time and gold for expansive ward coverage, Spirit awaited in the top side bush to gank kurO’s Leblanc. After distorting for a few creeps, Spirit immediately made way into the lane flashing and un-burrowing kurO allowing Xiye to come in with a timely flash charm. Everything in sync, first blood was Spirits for the taking. Lee retaliated with an unusually desperate gank top lane, ward hopping and flashing onto a Akula, an attempt with close to a zero percent chance of success. It seemed as though Lee was still trapped in game two, pulling the trigger too early. Spirit on the other hand, pressured the map tactfully, causing chaos in every lane securing kills thus snowballing his team ahead. Xiye absolutely erupted aw well, solo killing kurO. GE’s Lee fell short constantly ganking Akula’s Hecarim but his attempts proved futile. GE’s hype train was off the rails, and WE knew it, constantly forcing the issue during skirmishes and prioritizing objectives masterfully. It was only a matter of time as WE’s gold lead grew, from 3k to 4k to 5k to nearly 29k. WE had done the impossible, they had defeated the once undefeated Tigers.

To say that WE is the superior team would be quite naive even though they did indeed win. In this series they were the better team, they played to their strong points and never faltered from them. They knew completely that they would have to rely on a strong early game and snowball that lead. GE on the other hand strayed from their identity, they underestimated their opponent and payed dearly for it. Now World Elite has the opportunity to defeat TSM, and the claim the throne for themselves