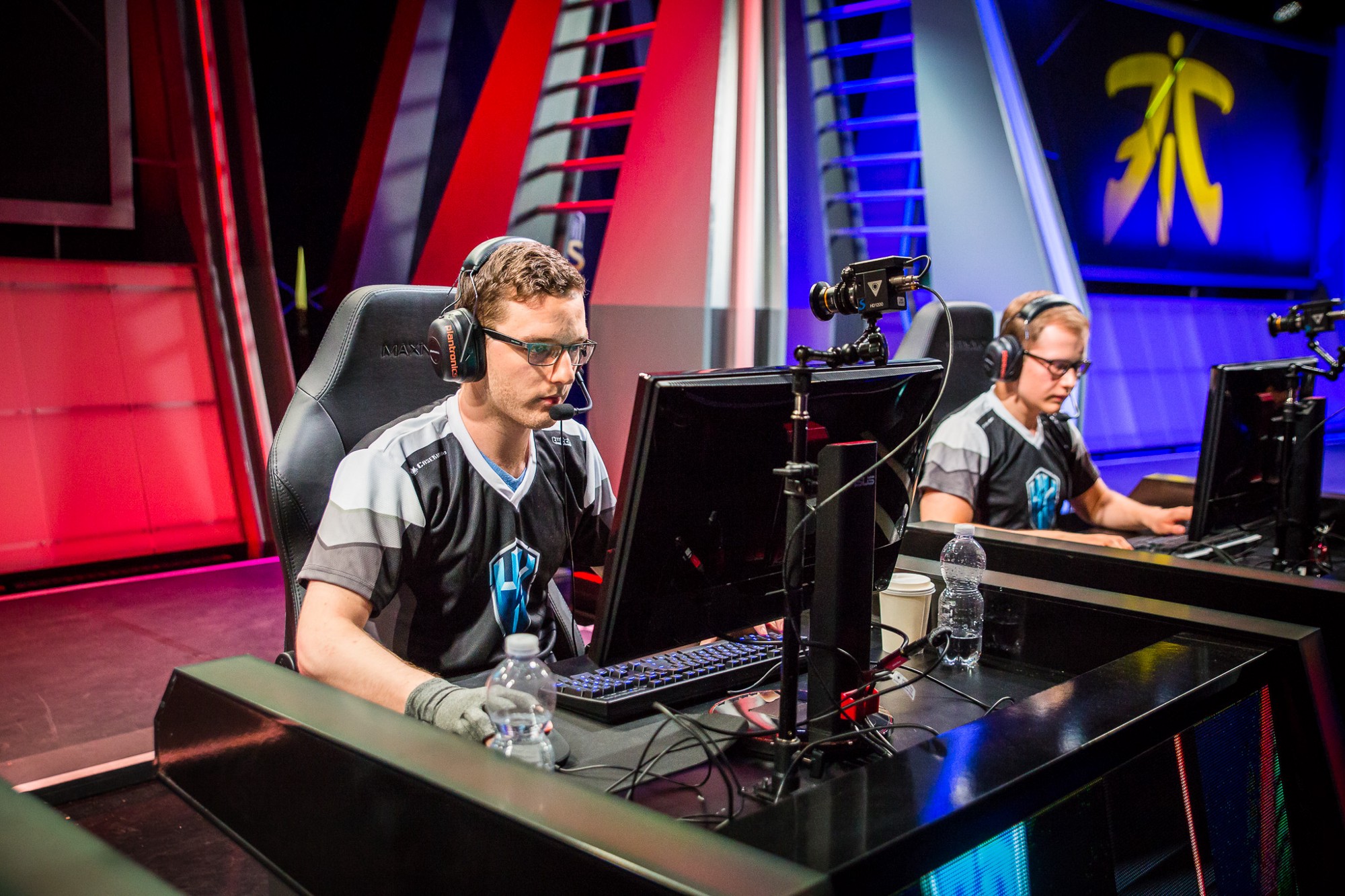 After H2K Gaming opened its 2016 European LCS summer season with two ties, Aleš “Freeze” Kněžínek and his teammates bounced back and swept week two against Giants Gaming and Fnatic. While the team sorted through some growing pains, many fans might’ve missed a new accessory on Freeze’s right hand: a grey fingerless glove.

The glove, used to relieve inflammation and joint pain, is a subtle reminder of the hidden strain competitive gamers often combat.

Esports is a booming industry, but lost in the buzz of massive prize pools and huge international audiences are the lifelong complications caused by neglecting repetitive stress injuries. Teams are investing in psychology coaches and nutritionists, but there is still a lot a work to be done toward educating top-level players on the problem.

“Education about the types of possible injuries and how to avoid them is key”—Cait McGee.

“They keep pushing their threshold to higher than almost any form of athlete that I take care of,” said Dr. Levi Harrison, an orthopedic hand and upper extremity surgeon that works with everyone from competitive gamers to MMA fighters. “They’ll be hurting tremendously, and they will still sit down and play for four to 14 hours, if not more.”

Fans and players are often most concerned about the risks associated with the injuries (Will I miss a game? Will I have to retire young?) but education going forward needs to focus as much on prevention as risks. Many repetitive stress injuries in esports are preventable by simple adjustments, according to Dr. Cait McGee, a physical therapist who also travels to events and works as an injury and ergonomics consultant for gamers.

“I’ve worked with Dota more than any other MOBA… most of the injuries I’ve seen are trigger points in the upper back/shoulder area, inflammation at the elbow (epicondylitis), carpal tunnel syndrome, and DeQuervain’s tenosynovitis,” McGee told Dot Esports. Dequervain’s is a condition affecting the tendons on the thumb side of the wrist. It causes pain when you turn your wrist, grasp anything or make a fist, according to Mayo Clinic. “All of these injuries are 100 percent preventable as they’re primarily due to repetitive stresses.”

It takes an obsessive amount of time and dedication to break into any top esport title. There is no guarantee you’ll have what it takes to go pro, even playing 10–12 hours a day. Some players drop out of high school or college, while others may neglect their studies and let their grades suffer. Being a pro gamer requires some risk, whether financial, temporal, or both. With that in mind, it’s easy to see how some might neglect their own well-being, in order to compete for prize money and spots on teams.

Because a gamer might not feel pain right away, it might not make their list of concerns, given how much they already have to worry about. Preventative measures like stretching and finding ergonomic equipment could stave off career-ending struggles. And that makes the task for doctors seeking to educate players particularly urgent. For the players, the consequences are about more than just a sudden exit from professional play. Injuries with even mild symptoms can affect performance, especially at the highest levels.

“Some are playing because they have endorsement deals, and if they stop playing, what do you think is gonna happen to those deals?” Harrison said. “Some of them are on elite teams. If you’re on an elite team, but you’re the weakest link, how long do you think you’re gonna be on that team? If you’re complaining, and bringing down the morale of other people, and you can’t keep up, you’re not gonna be around.”

Education going forward needs to focus as much on prevention as risks.

According to Freeze’s Twitter, his injury occurred while playing in North America, but he ignored it until it was too late. Eventually, tendonitis in his right wrist kept him from competing in both LCS finals and Worlds. If he acted earlier, that injury might’ve been preventable.

That’s the type of situation that makes Harrison say his goal is to bring about a consciousness of preventive care.

“There is awareness, but is there action?” he said. “They know they’re doing something that’s detrimental to their health. With that awareness, are they implementing a strategic plan to stop it? In general, they are still playing through the pain.”

One of the first League pros to speak on his battles with a wrist injury was former-Cloud9 mid laner Hai Lam. Many analysts have cited Hai’s champion pool as a weakness in Cloud9’s 2014 Worlds run. This drop-off is often attributed to his injury. In an email interview with Dot Esports, Hai discussed the struggles of balancing practice and his own health.

“It’s really annoying, knowing your teammates are practicing hard to get better and you want to do the same but you can’t,” Hai said. “It’s not an ideal situation for either party.”

After the 2015 Spring Split, Hai announced his retirement, citing his injury as a major factor in a statement to fans.

“My wrist injury is something that I simply cannot ignore,” Hai said in his statement at the time. “It limits my ability to play as much as I need to and my ability to improve. I cannot keep up with the amount of Solo Queue games my teammates play and it’s not fair to them. At best, my wrist injury would have only allowed me to play for another split and that wasn’t even certain.”

These injuries exist in all esports. No game is more harmful than another.

“It’s less that there’s one specific game that puts you under the most stress and more that all games will cause stresses, and any game can result in overuse injuries if you don’t have the right setup, right ergonomics, and right preventive measures in place,” McGee said.

In the last year alone, top esports competitors like Freeze in League, Olof “olofmeister” Kajbjer in Counter-Strike: Global Offensive, and Aziz “Hax” Al-Yami in Super Smash Bros. Melee all missed chunks of time due to injuries.

Hai, who eventually returned to Cloud9’s starting lineup in the summer of 2015, told Dot Esports he didn’t really consider the possibility of repetitive stress injuries, until it was too late.

“I have a lot more knowledge on how to handle my wrist problems,” he said.

Hai’s injury was well documented within the League community. Around the same time, Søren “Bjergsen” Bjerg battled irritation in his wrist, which sparked online discussions on how players can keep healthy. According to Hai, these injuries helped get the word out.

“My injury was the first major public one,” Hai said. “People put in more effort to try and prevent it.”

Some team owners are stepping up to support their players.

“I know there’s increased awareness of repetitive stress injuries; plenty of players and team managers have approached me for general education and advice with regards to ergonomic setup and prevention—CLG in particular has a team wellness specialist who is also a physical therapist,” McGee said, referring to Matthew Hwu, CLG’s head of physical performance and esports medicine.

For Harrison, the orthopedic hand surgeon who shares information for gamers and athletes online, the fact that many of his YouTube videos on stretching techniques for gamers have nearly 1 million views is a sign that people are taking steps to improve their health.

“Once someone comes in the symptomatology of hand pain: swelling, their hands are hot and swollen, they just can’t move their fingers, or they can’t sleep at night because their hands wake them up,” Harrison said. “They can’t find a mouse, or a joystick or a console that fits their hands, now that their hands are swollen. Their fingers hurt constantly.

“The goal for myself is to bring about this consciousness of awareness and prevention. There’s not one gamer I’ve ever spoken to who has not gone to the website or the YouTube channel to look at those exercises. There’s a reason why some of those videos have over 900,000 hits. Because they’re helping people.”

McGee, meanwhile, hopes teams and players take it upon themselves to ensure everyone understands the seriousness of possible injuries.

“A lot of players will come to me and say, ‘the back of my forearm’s been hurting, I think I have carpal tunnel,’ because that’s the only injury they know of; if it’s not carpal tunnel, they don’t think it’s serious, ‘because how could it be serious if it’s not serious enough for me to have heard of it?’ so education about the types of possible injuries and how to avoid them is key,” McGee said.

As players continue to press the boundaries on top-level competitive play, it’s critical that teams and players are proactive in treating and preventing these devastating injuries.