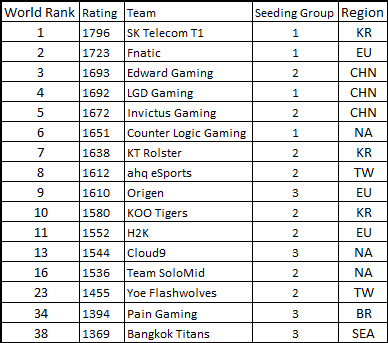 The draw has been completed and we have the four groups that will be competing in Europe for the 2016 Summoner’s Cup. The 16 teams that will be competing are listed below. They were divided into three groups for the purposes of seeding based on their domestic league performances. One team from the 1st group, 2 from the 2nd and 1 from the 3rd will play in each group. No two teams from the same region will play in the same group.

Their ratings are based on the Elo rating system. The most recent ratings are posted on the next page and an explanation can be found here.

Here are the four groups. Because of the number of games the only practical way to generate odds was by simulating the play of each group a large number of times (10,000). So there’s a slight variance from their “true” odds.

Unsurprisingly all of the top seeds (CLG, SKT, LGD, FNC) are favourites to advance from their respective groups. But two, Fnatic and LGD, will have relatively tough fights on their hands. Counter Logic Gaming is expected to coast through its group despite being the lowest ranked top-seed (by a considerable margin) on account of its being drawn into the weakest group in the tournament. Indeed, it was drawn into the fourth weakest group possible. It could be made weaker only by swapping KOO for H2K, Pain for Bangkok Titans, or both at once for the weakest group.

Already people are calling CLG lucky, or the beneficiaries of rigging, or the faithful being rewarded. Is this true? Well, it is, very roughly, quantifiable. I calculated the odds of each team advancing from their group if they faced three opponents with the average rating of their potential opponents from each seed group (teams that they cannot play excluded, of course). Obviously this isn’t quite precise; the opponent’s they face aren’t evenly distributed because they interdependent. But it should give a rough idea.

As you can see the “luckiest” teams are all in Group A. This is because CLG and KOO benefited by playing a Wildcard and the lowest rated 2nd Seed team (Yoe); these weaker teams also benefited by drawing the lowest ranked top seed (CLG) and a middling 2nd seed (KOO). As a consequence of this even Pain Gaming has an OK chance of advancing (the simulations showed this was mostly by tying for 2nd and going through on the tiebreaks. BO1s benefit the underdog). KOO in particular benefited by avoiding any Chinese teams, all of whom would’ve threatened its Worlds hopes.

Conversely the least lucky teams are H2K and TSM. Both are the lowest rated teams in very competitive groups. While they never had good chances of going through the draw caused them to shrink considerably.

The last thing to consider is which group should be deemed the “Group of Death.” There are two contenders. Group A is out as the weakest and Croup C, despite having arguably two of the three best teams, is the most predictable. Group B is the strongest group overall. But it’s brought down by the presence of C9, who are big underdogs. Group D, on the other hand has the top Chinese team, two major dark horses (KTR and OG) and a non-terrible fourth team (TSM). It’s also the least predictable group. Even TSM, a major underdog, still has a 25% chance of advancing.

The full rating list is on the next page.