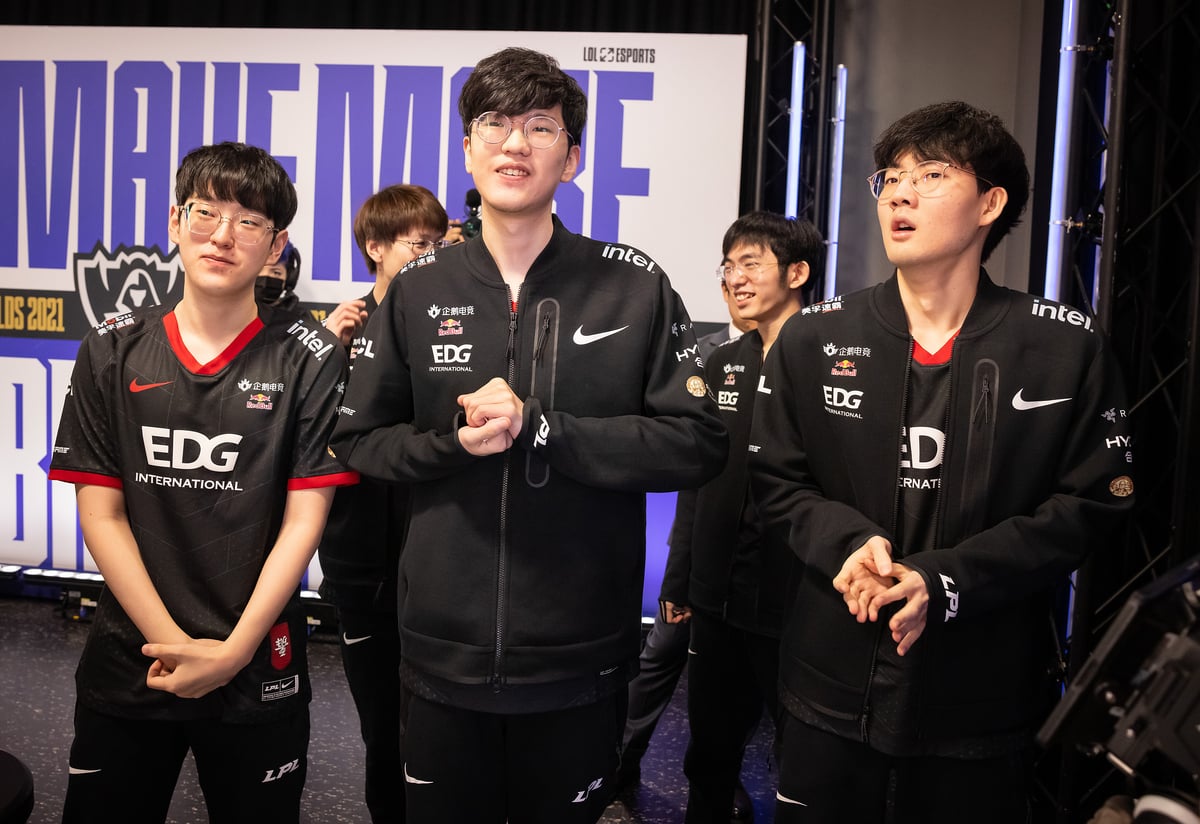 The LPL now only has one team left standing in the League of Legends 2021 World Championship—and they happen to be the LPL’s Summer Playoffs champions that have strived for years to make it out of the quarterfinals.

In a five-game series testing the strengths and weaknesses of both teams, Edward Gaming locked their spot in the Worlds semifinals against Royal Never Give Up today. After being unable to meet one another during the LPL Summer Playoffs, these two teams made sure this series defied expectations to show how important it was for them both to prove the strength of their region. The two ditched the LPL’s typically slow-paced games in favor of scrappier skirmishes for five straight games.

The first two games of the only LPL vs. LPL series at Worlds resulted in both teams trading victories back and forth. Despite EDG’s one-sided sweep at the hands of RNG, EDG took advantage of RNG’s strange draft choices—including an Annie pick by Cryin—and walked out of game two with some battle scars. It was not enough to deter the team from putting up a fight for the remainder of the series, though.

Jiejie’s Olaf defined EDG’s victory in game three. On two separate occasions, what appeared to be an RNG Baron was stolen by Jiejie simply walking up, pressing Smite, and walking away with a major objective now under EDG’s control. But slip-ups in game four made them look much like they did in game one, handing over the win to RNG and forcing the first silver scrapes of the quarterfinals—a stark contrast from yesterday’s 3-0 sweep by T1 over Hanwha Life Esports.

In one last dominant victory, the LPL Summer Playoffs champion squad in EDG took over all aspects of the Rift and gave RNG little room to fight back. Between Viper’s Ezreal and Meiko’s Yuumi, the damage and sustain was too much for their rivals from the LPL—a disadvantage made even worse by RNG continuing to get caught out due to desperation for objectives.

There is now only one LPL team remaining in contention to call themselves the 2021 world champions. EDG advanced to the semifinals, where their first world title is within reach. But to get their hands on the title, they’re going to have to go through the teams that have proven themselves as the best in the world.

T1 have already advanced, and these two teams will only meet if they both qualify for the finals or if MAD Lions or DWG KIA can knock them out. EDG’s semifinals matchup will put them against the winner of Monday’s bout between Cloud9 and Gen.G.

RNG don’t end their year without accomplishments, though. The LPL squad ran through international teams to win this year’s MSI and proved their strength by making it to the quarterfinals of Worlds. EDG now remain as the LPL’s only hope at a world championship in 2021—and this sixth attempt at the title may be the one to bring about success.