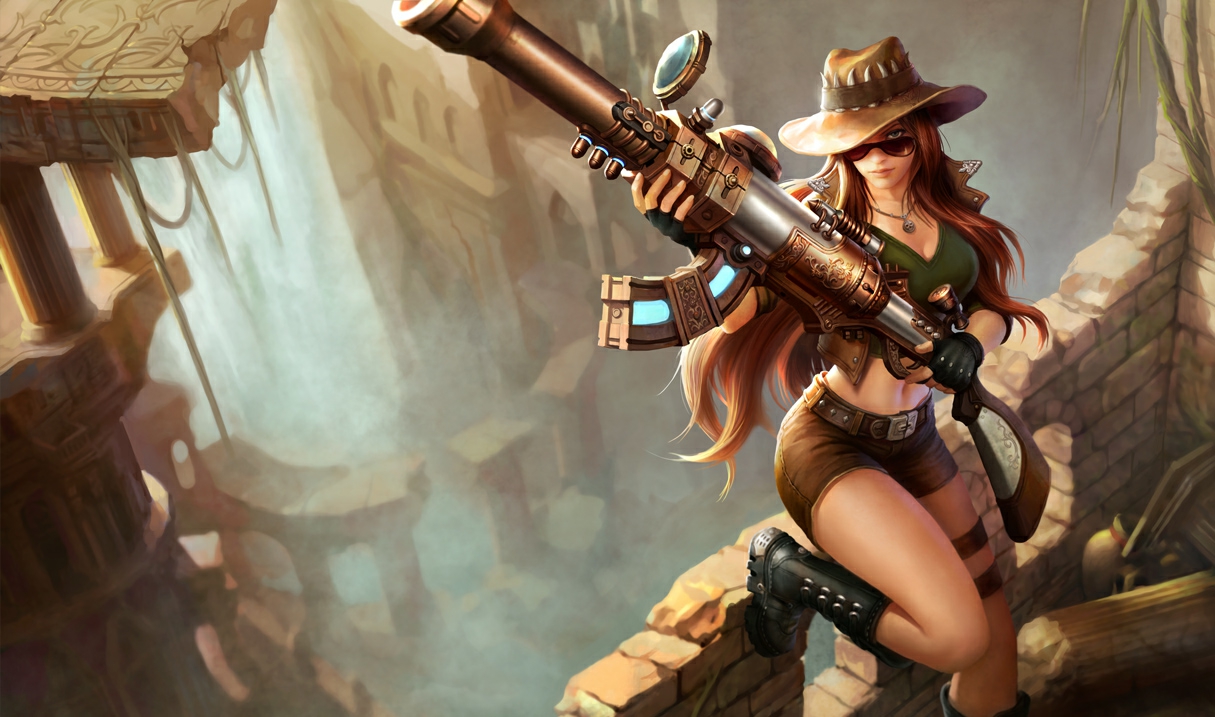 Move over Tristana, Kog’Maw, and Twitch. There’s a new sheriff in town.

Caitlyn, the Sheriff of Piltover, had been a meta ADC pick for ages. Pros know how to use her long-range poke in lane better than average players. And teams know how to get through her mid-level power spike and into the late game.

But nerf after nerf made her plummet down the charts, and in her place came a series of hyperscaling ADCs. Fans were delighted in the first week of the Worlds group stage when SK Telecom T1’s ADC Bae “Bang” Jun-sik took Twitch into the late game and started to decimate foes with his range and AOE poison, Ardent Censer be damned.

Those Twitch highlights spawned a number of copycats. But heading into the second week, it also created a potential for innovation. Late-game scaling teams had won the first week of Worlds, but those drafting for the early game were determined not to let that happen again.

So in came the Caitlyn pick, and all of a sudden, early game teams started winning.

It’s easy to say that pro teams are just poking their enemies down with Caitlyn and slowly taking the bot lane turret. But that doesn’t do justice to the amount of effort it takes to play around a perma-pushing bot lane. This is Worlds, not solo queue.

Caitlyn’s first appearance in the Worlds main event was when Team WE’s ADC Jin “Mystic” Seong-jun pulled her out against TSM in the second week of groups. But it wasn’t just Caitlyn. Rumble top and Jayce mid meant that WE would win all three lanes. Sure TSM would scale, but they would have to survive to late game.

TSM mid laner Søren “Bjergsen” Bjerg actually heroically held mid lane despite a tough matchup on Ryze. But it was WE jungler’s Xiang “Condi” Ren-jie who stole the show. He gave up some farm after his second back to run straight to the bot side jungle to support the team’s key carry. From the fifth minute on, Condi controlled that side of the map, letting Mystic push.

Of course, the snowball wouldn’t be complete without mistakes from the enemy team, and TSM opted into several poor trades that eventually led to all of their outer turrets falling. It was a macro catastrophe from TSM, but that’s what early pressure does—it forces the other team to react and try to get ahead in tempo, with the risk that any misstep leads to disaster due to broken lanes.

The rise of Ryze

The other interesting thing from that game was actually Bjergsen’s Ryze. After a steady climb up the tier list heading into the main event, Ryze is not the most-picked mid laner despite a shaky lane phase and a quirky ult. He wasn’t played much at all throughout the summer.

The only change to him in the Worlds patch was a hefty buff to the AP ratio on his W, Rune Prison. That helps, but to see why teams are looking to Ryze, it’s helpful to look at what he’s being picked into.

He’s not a direct counter to Syndra, who he’s most commonly matched with. That’s only because Syndra is a beast in the mid lane herself and has been for over a year. No, the reason Ryze is being picked is because we are in a world of tanks.

Tanks have two natural counters—hypercarry ADCs that can shred their armor, and DPS mages who can ignore it. Magic resist does exist, but the standard build path favors Righteous Glory, which gives tanks a smorgasbord of stats at a great price point—but the one thing it doesn’t provide is MR.

That means that when Ryze gets going, he’s often fighting tanks sitting on just a Specter’s Cowl. Even when a tank completes a Spirit Visage or Adaptive Helm, it usually comes at the cost of an armor item, which is death against ADCs. Add in Ryze’s late-game wave clear, and you can see why he’s suddenly in fashion.

Not the only option

The interesting thing about Ryze is that there are other AP mages that offer a similar profile with a few more benefits. Cassiopeia and Orianna, in particular, are still played, but not to nearly the extent Ryze is.

Cassiopeia offers better early-game control and constant kill threat with her ability to position aggressively in lane. She also offers more self-peel with her W and R. Don’t believe it? Watch for yourself.

Orianna is more of a utility mage, but her ultimate can be game-changing. She doesn’t quite have the tank-shredding damage of Ryze and Cass, but she’s very safe while offering something to engage on in the late game. SKT mid laner Lee “Faker” Sang-hyeok won Worlds last year by constantly throwing out Ori ults on a super low cooldown.

Janna is still OP, but there’s someone else

Last time we looked at the Worlds meta, we mentioned some teams are trying to counter Janna, including that Twitch from Bang. Well, she still hasn’t really missed a beat.

Teams are trying to throw Lulu at her, someone with a good lane phase and the same focus on rushing Ardent Censer. It hasn’t worked. Lulu’s getting crushed by Janna, which may mean it’s time to focus on engage supports that can kill Janna before she pulls out of that annoying ultimate.

Even then, Janna’s late game is insane. Pair her with an early-game ADC like Caitlyn or Xayah and you get a silky smooth power curve that often lasts through victory. There’s just one support that can have a prayer against Janna, and it again goes back to an SKT pick: Rakan.

Rakan’s ability to engage while building Ardent Censer for his E makes for a totally broken champion. He’s terrifying in lane, where he can dash in and out without regard for safety. He can spread the Ardent buff to multiple allies. And he can start wombo combos that last until the entire enemy team is dead.

For most teams, Janna is still the first love. But don’t sleep on Rakan.