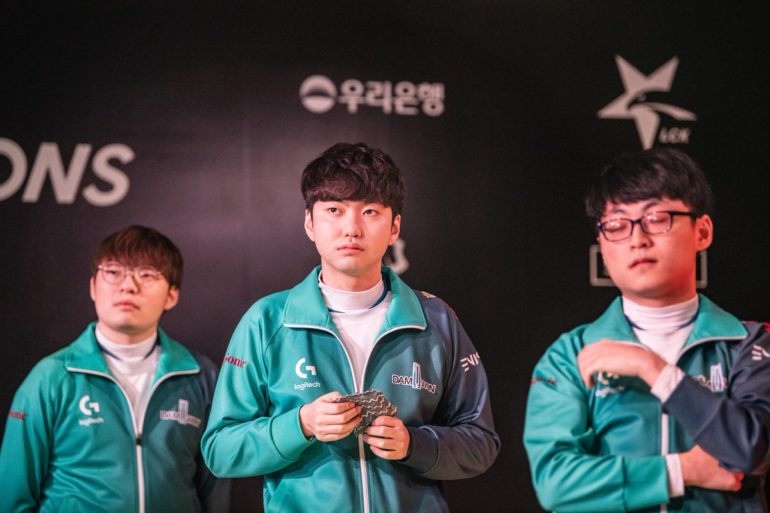 Damwon Gaming took down Griffin 2-0 today in the 2019 LCK Summer Split to claim first place ahead of Sandbox Gaming and Kingzone DragonX.

After losing their last two series against SK Telecom T1 and Gen.G, Griffin needed to change something up. Choi “Sword” Sung-won was benched for Choi “Doran” Hyeon-joon. Doran has been in the Griffin organization since December as a trainee but was moved up to the main roster in May before making his debut today.

With the rookie on the Rift, Griffin dedicated resources toward the top side of the map to make sure his laning experience against explosive young-gun Jung “Nuguri” Ha-gwon was as easy as possible. Doran was able to sweep up the first kill in lane in both games, playing Vladimir in game one and Irelia in game two, with Nuguri overextending as Jayce to try and punish the newcomer.

Griffin also managed to turn up the game pace from their losses against SKT and Gen.G, with Lee “Tarzan” Seung-yong putting the pressure on lanes early as Sejuani and Zac. But as Tarzan looked for lane pressure, Kim “Canyon” Geon-bu secured crucial objectives for Damwon.

Both games also saw Griffin break open the early games around the dragon. In game one, Griffin got a three-kill teamfight victory around the Ocean Drake, although Canyon secured the buff before the fight started. Game two exploded in similar fashion around an Infernal Drake, with Doran picking up a triple kill as Griffin won the fight and secured the dragon.

But, in both games, Griffin capitulated in the mid game. Griffin gave up the Baron in game one at 24 minutes before slowing bleeding out of the match in teamfights. Damwon didn’t even need the Baron in game two. A swift ace around the Baron was enough to finish the game in 30 minutes.

Heo “ShowMaker” Su was a standout performer for Damwon on his birthday. His Corki in game two was dominant, sniping down Griffin’s carries and dishing out the damage in teamfights. He held a huge item advantage over Jeong “Chovy” Ji-hoon thanks to Canyon’s focus on funneling plate gold onto the hyper carry, and Griffin didn’t have the tools to deal with him when the final fight came around.

Both games played out in the same fashion for Griffin and were reminiscent of their losses in previous weeks. Griffin have struggled with teamfight compositions in the LCK and always find themselves getting outscaled. While Doran put up a passable first appearance in the LCK, the number of resources required to get him ahead in the game put the rest of the map, especially Park “Viper” Do-hyeon and Chovy, behind.

But things are starting to click at the right time for Damwon. Nuguri is playing incredibly well, while Showmaker is putting up the performances everyone was expecting when he entered the LCK. This explosive roster is now overtaking Griffin and they look ready to compete for the LCK title this season.

Damwon and Griffin won’t return to the LCK stage until next week where they’ll take on Sandbox and KT Rolster, respectively.