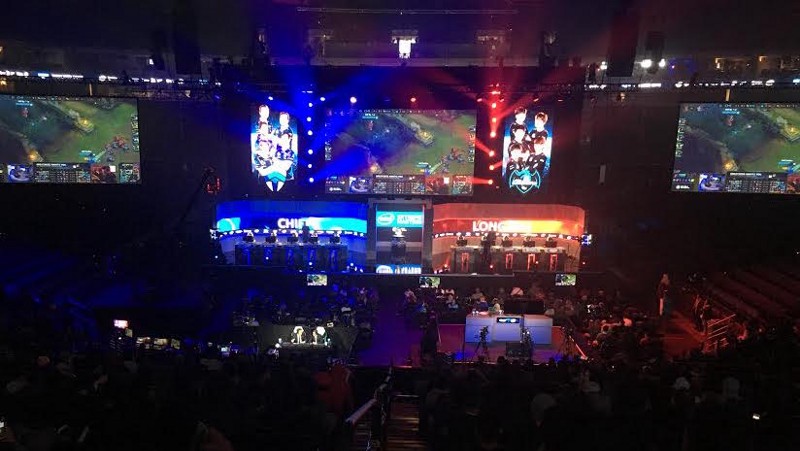 The stakes were not particularly high in the exhibition played during the intermission between the two League of Legends quarterfinal matches at IEM Oakland on Saturday. But the crowd was captivated inside the Oracle Arena.

It has been much-discussed that several top teams declined invites to IEM Oakland. The depletion in the pro competition was particularly apparent on day one of the tournament, when the college match between platinum and diamond-level players was the most exciting thing to happen on the League stage.

At the match’s defining moment, Stanford University’s Ted “BeastLi” Li took on all five members of University of California Berkeley as they sieged Stanford’s nexus turrets 46 minutes into the game.

BeastLi’s Ezreal poked and pecked away at the Cal squad, buying just enough time for the rest of his team to respawn to protect their half-health nexus. Stanford hunted down Cal’s runners in the jungle, pushed into their base, and finished the game just as they respawned.

“That was far and above, beyond entertaining,” caster Indiana “Froskurinn” Black said after the game. “That was a great show.”

The 47-minute game was chock full of crazy team fights that often lacked the professional polish you get used to seeing in matches played on stage. Regardless, the game drew the loudest cheers of the day from the League crowd.

Stanford’s comeback seemed unlikely throughout most of the match after putting themselves far behind with two ill-advised dragon attempts. But the squad eventually clawed back by winning a series of extended team fights.

IEM has traditionally been a big deal for League teams. It’s one of the few international tournaments of the year along with Worlds and the Mid-Season Invitational.

The $100,000 total prize pool was not enough to lure a full slate of top teams to Oakland, however, as roster uncertainty and the need to practice on the preseason patch caused teams like Immortals, Splyce, and I May to drop out.

IEM missed another opportunity to draw interest by using 6.21, the Worlds patch, rather than 6.22, which would have given fans their first look at pro teams playing with the preseason assassin and jungle changes.

The competition is likely to pick up Sunday when NA LCS winner Team SoloMid debuts after a first-round bye. TSM will not only be looking to recover from a disappointing performance at Worlds but they’ll try to avenge a 2014 IEM loss to Unicorns of Love.