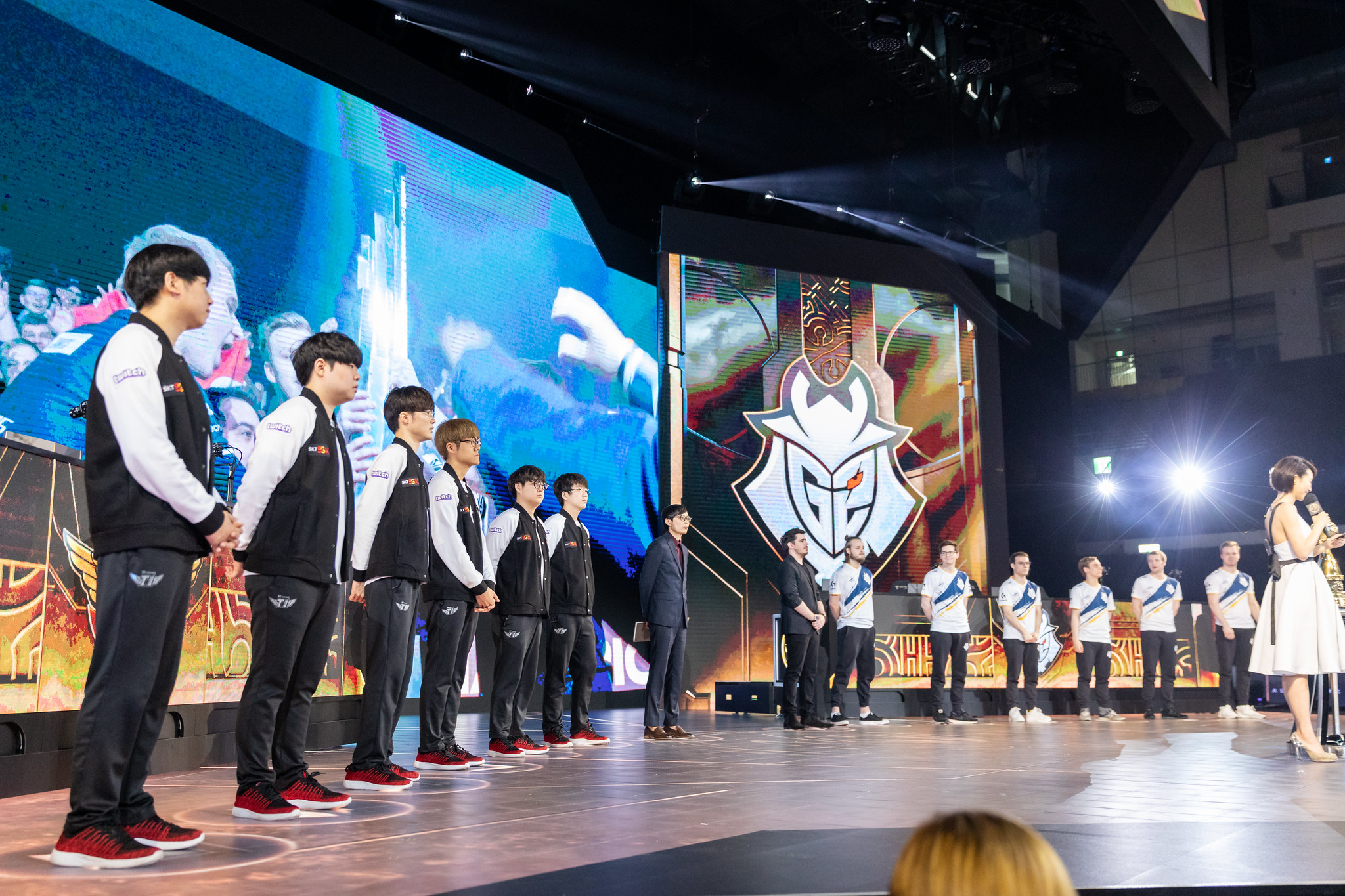 Thirteen regions were represented at this year’s League of Legends World Championship. Now, only three remain.

This Sunday, one of either the LEC or LCK will be sent home when G2 Esports and SK Telecom T1 go head-to-head in the semifinals. Will G2 prove their dominance against SKT once again or will SKT continue on the warpath to reclaiming their throne?

Earlier this year, the two teams faced off in the MSI semifinals. The two teams were evenly matched until G2 pulled ahead in the fifth game. G2 went on to win the tournament and swept through the LEC Summer Split before Worlds.

SKT, however, dropped to ninth place during the LCK Summer Split. They seemed to be in a slump. But beginning in week four, the team went on a nine-match win streak to secure a spot in the playoffs. SKT’s rise didn’t stop there. They tore through the playoffs to claim first in the region. Now, as the last remaining LCK team, SKT are primed for a total takeover.

Going into Worlds, SKT were placed into an unexpectedly tough group with Fnatic and Royal Never Give Up. But they still came out with a 5-1 record. The wins weren’t always one-sided, however. The games were often a contest of which team could gain an edge, especially against RNG. SKT, however, proved time and time again they have the superior teamfight. Even if SKT fell behind early, they seemed to always whittle their way back into a game by outmaneuvering their opponents.

Lee “Faker” Sang-hyeok has returned to form, tearing up the mid lane and controlling the tempo of the game through roams. Side-by-side with Kim “Clid” Tae-min, the two are a roaming duo that helps create space for the rest of their team. Clid alone is arguably the biggest reason for SKT’s success this Worlds. He’s the one who aptly enables Faker to move across the map and provides a lot of the set up for the team.

Park “Teddy” Jin-seong, on the other hand, has essentially been the ideal ADC. His positioning has been immaculate, oftentimes skirting between life and death as he navigates through fights. He’s a consistent source of damage that SKT can depend on.

Although SKT have had a commanding showing thus far, the team faltered during their quarterfinal series against Splyce, where SKT were expected to shine. By game three, it seemed like SKT took a step back and lost their proactivity. Splyce were able to exert so much pressure in the early game that SKT couldn’t come back. Even in game four, SKT looked out of sorts and uncoordinated. Ideally, SKT’s series with Splyce should reinvigorate them to perform by the time they face G2.

The pride of EU

G2 already topped the LEC standings when they joined the region in 2016. But this year, they’ve doubled down on their position as best in the West. Two LEC titles, along with an MSI championship, and now G2 are on their way to claiming a Worlds title.

They showed a moment of weakness against Griffin, which cost them the first seed in their group. But they’ve otherwise demonstrated their superior map control and glided through just about every other match so far. Even during their difficult series against DAMWON Gaming, G2 seemed to always have a plan of attack. If their opponent claims a turret, G2 will likely be taking an objective of their own in response.

Luka “Perkz” Perković has been the star for G2, enabling them to play just about any style due to his diverse champion pool with options like Yasuo and Zoe. Unfortunately for G2, non-traditional bot lanes have proven to be inferior to traditional lanes. But there’s the opportunity to surprise SKT with a sneaky pick from Perkz. Marcin “Jankos” Jankowski is often the one leading G2 through the early game with well-timed tower dives. Along with Rasmus “Caps” Borregaard Winther and Martin “Wunder” Nordahl Hansen, who commonly play pressure lanes, G2 can maintain lane priority. This allows the team to stay ahead even when their opponents seemingly take a good trade.

Where G2 may struggle, however, is in the early game. Their two losses against Griffin were both lost early on. Considering SKT have significantly amped up their early game, this will likely be a point of contention throughout the series. Still, G2 have already beaten SKT in a best-of-five. Now it’s their time to make a statement by defeating them once again.