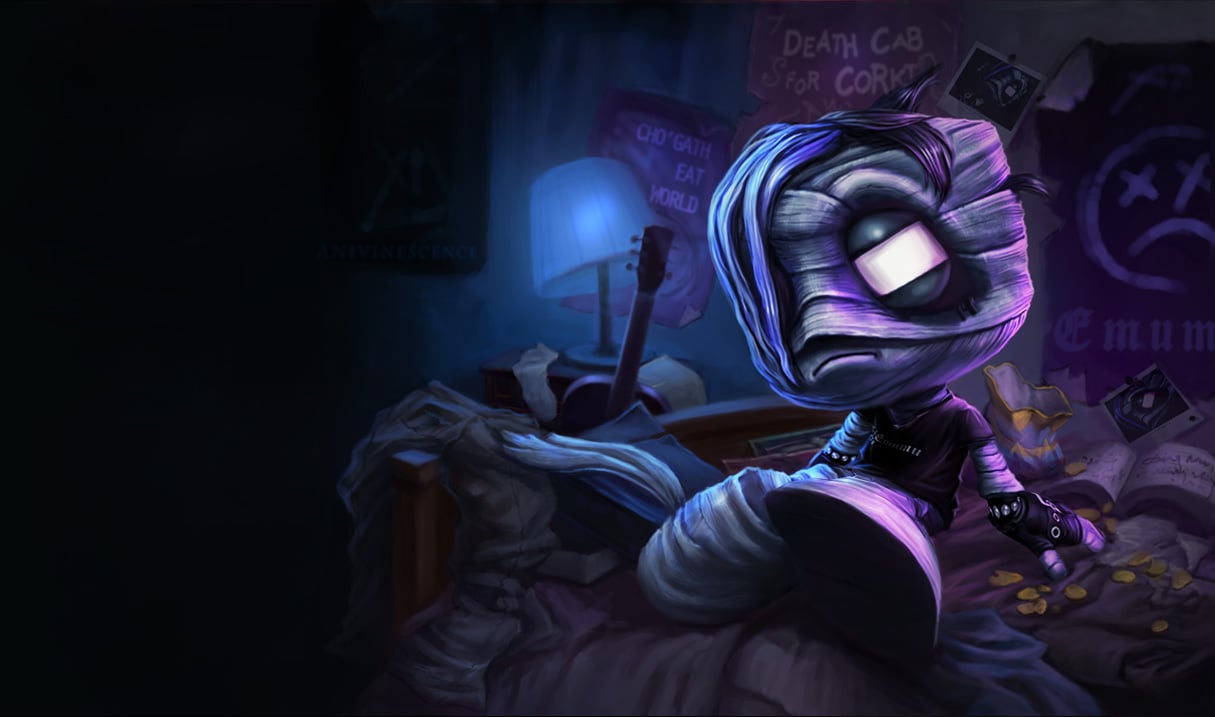 Remember when Amumu was priority?

The community entered a fervor after IwillDominate went on record saying that the jungle is the weakest it’s ever been. While Riot intended for the Season 5 jungle changes to increase strategic diversity, those changes have done the exact opposite. The jungle is dominated by a few strong duelists that all build the same items and perform the same function. Tank Junglers are even less viable than before thanks to their poor early clears leaving them either unable to gank or vulnerable to incessant counter jungling. Fixing this dilemma will be key in Riot meeting their intended goals for the jungle this season. But how do we fix it?

This has been the clarion call from the community for the past few days. The easiest way to fix the lack of diversity is to buff tank junglers. It makes sense that the community would have this opinion since they tend to view any changes in strict black and white terms. Any change is either a buff or a nerf. Unfortunately, such buffs are unlikely to have the intended effect for two reasons.

The jungle has always functioned as a home for Champions that don’t necessarily rely on gold to scale. Lee Sin is a perfect example. What makes Lee Sin so strong is the amount of utility and out play potential built into his kit. To a certain extent, extra gold doesn’t make a difference in his ability to do his job. This isn’t so for tank junglers, and tank Champions in general. Most tank Champions bring two things to their team. Some form of C.C. and/or peel, and sheer tankiness. While tank stats can be built into a kit, the majority of them come from items that are bought. Thus, tank Champions scale very well with gold. Maokai is a perfect example of the problem this poses. Maokai was released as a jungler, and was a high priority pick for most of season two, but began to fall off with the rise of Elise and Lee Sin. Riot buffed him last season and he became a priority top lane pick. A top laner will almost always have more gold than a jungler, and since tank champions scale very well with gold, it is logical for a strong tank champion to end up in the top lane, regardless of if they are viable in the jungle or not.

In theory, Riot wants to make it so that tank, bruiser and duelist junglers all stand on an equal footing in the jungle. Achieving this is not as easy as simply buffing tank junglers. In the hypothetical world above, a jungler is making a meaningful decision between the early game presence of champions like Vi, Jarvan and Lee Sin, and the mid to late game presence of Amumu, Nautilus and Sejuani. Each would have its own advantages, but the player would be making a tradeoff. Sacrificing one strength for another. For competitive play, the latter would undoubtedly be preferable if the two stood on equal footing. That’s the problem with simply buffing tank junglers. If, in bringing tank junglers back into the meta, we kick the currently dominating bruisers out of it, then we have failed in our goal to achieve strategic diversity.

Recently, former pro jungler Dexter suggested on Twitter that Riot rework the bottom half of the Defense Tree to cater to junglers since nobody uses it anyway. This is arguably the best suggestion I have seen to date, and one that was touched upon in this post that hit the front page of reddit the other day. Currently, the Offense and Defense Trees are unbalanced. The imbalance exists in how each individual mastery in the two trees function. In the Offense tree, masteries directly buff your Champion’s damage through either sheer stats like Marshall, Arcane, Warlord and Archmage, or reward you for dealing damage (Feast). Every mastery buffs something within your own control. The Defense Tree is structured differently. Some of the masteries are only effective in specific instances. Reinforced Armor is only useful against Critical Hits and evasive is only useful against AoE magic damage. Based on their position within the tree, Runic Blessing and Second Wind should be two of the strongest Defense masteries, however both are arguably useless. Runic Blessing’s usefulness increases the more you die, which is an example of truly awful design. A perfect example of the imbalance between the two trees. The Offense Tree gets Dangerous Game, which helps keep you alive. The Defense Tree gets Runic Blessing, which only helps you out when you die. Having a mastery that rewards you for dying in a game where your goal is not to die is just poor design. As for Second Wind, a tank jungler is unlikely to have either Lifesteal or Spellvamp, and only a few have some form of self heal. So increasing those by 10% when your Champion is below 25% health is useless. At the that same level of the Offense Tree, you get increased magic and armor penetration, more attack speed and on hit magic damage. All much more useful than either Second Wind or Runic Blessing. In short, an imbalance between the two trees exists because offense masteries are universally useful, while some defense masteries are either only useful in specific instances, or not at all.

Bladed Armor: Basic Attacks from Neutral Monsters cause them to bleed, dealing physical damage equal to 25% of bonus armor each second.

The purpose here is clear. Right now, Champions like Lee Sin can go 21/9 and pick up their full offense tree and this mastery. But the purpose of the mastery is to make it easier for tanks to jungle, and should thus have a stronger effect for tanks.

Second Wind: Self-Healing, Health Regeneration and damage to Jungle Monsters is increased by 10% when below 25% health.

Another slight adjustment that helps out junglers. The jungle is supposed to be the Jungler’s domain, so it makes sense that they would be stronger in the jungle than other Champions. Great synergy with the new bladed armor that should help tank junglers survive their clears easier.

Hey look, we turned an utterly useless mastery into a useful one. Also note that the above three masteries are all deep enough in the tree that Champions like Lee Sin can’t take them without losing damage. The above changes would serve as a buff to the survivability of tank junglers in the jungle without driving bruisers out of the meta.

This one is tricky. Riot has reworked the jungle a few times now, and it’s pretty clear that their changes haven’t always had the intended result. I’m not advocating for Riot to completely rework the jungle, especially not in the middle of the competitive season. But there are a few changes that Riot could make to balance the jungle.

For starters, tank junglers are at a natural disadvantage when it comes to Red and Blue Buff. Since blue buff provides CDR, it’s useful for every Champion regardless of whether they use mana or not. So even Lee Sin gets some use out of it. The problem with Red Buff is that it is not useful for every Champion. Red Buff applies a DoT on hit, and slows the target. This is great for Champion’s like Lee Sin, Vi, and J4 whose primary source of damage involves attacking the target, but provides significantly less benefit for someone like Amumu, Nautilus or Sejuani. Especially the latter two, since slows become less effective as they stack. They also don’t attack as much, or as fast as the bruisers. So while Red Buff is useful in that it gives experience and gold, it doesn’t provide as much combat effectiveness. In short, being double buffed provides a larger power spike for bruisers than it does for tank junglers. I’m sure there are any number of ways to remedy this imbalance. For starters, Riot could change the buffs so that one is entirely offense oriented, while the other is defense oriented. Red Buff could increase bonus armor/magic resistance or health. You’ll notice that a lot of the changes I suggest involve bonus stats. That’s because increasing base stats rewards every jungler, and thus does nothing about the imbalance. Increasing bonus stats is more likely to reward tank junglers that are building those stats. Riot could also make it so that you can only have one buff on at a time. This would be a severe change, but a possibility nonetheless, and would certainly make for some interesting choices in game.

I really like the direction Riot has gone in having jungle monsters provide various benefits when smited, the two biggest coming from Krugs and Gromp. Riot likely intended Krugs to be more beneficial to bruisers as they are likely to proc the stun more often, and Gromp to be more beneficial to tanks. Changing the DOT to make it more effective for tanks may go a long way towards improving the safety of tanks in the jungle. It’s not like tank junglers can’t have a strong early game presence. Amumu, Nautilus and Sejuani all have ways to gank pre-6, the problem is that they are often too low to be able to do so. Fixing this problem should allow for tank junglers to be at least a little more viable, and it seems like Riot agrees. 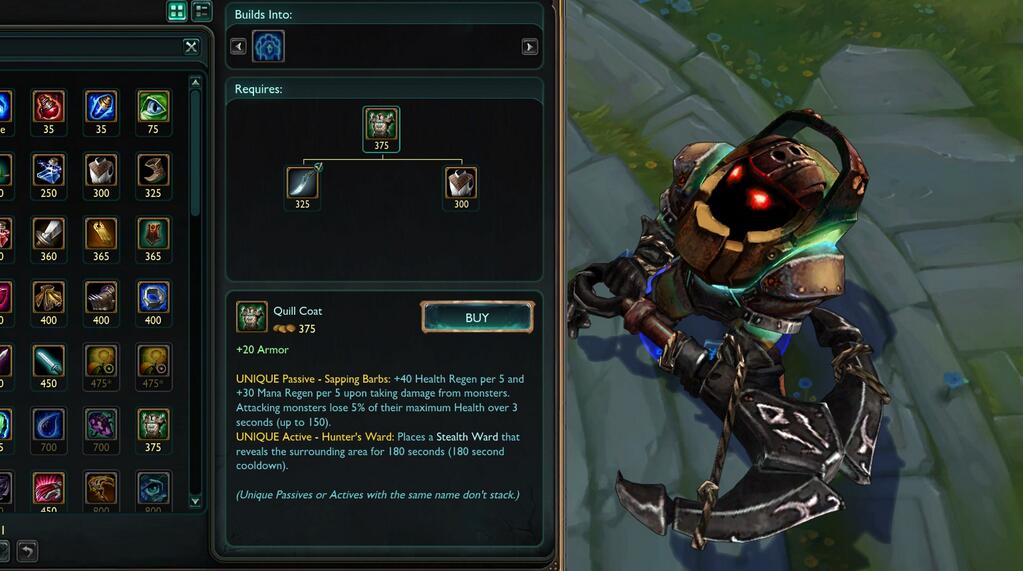 There are any number of possible solutions to the problem. It looks like Riot intends to attack it from an itemization perspective, paired with a few small changes to Gromp. It never made sense that all four jungle items would build out of Hunter’s Machete so this is a good decision. When it comes to improving a Champion’s ability to clear the jungle in the first place, the benefits provided by the 850 gold tier jungle items are too generic. Having the tank option build out of an item that gives tanks more of an early game benefit makes sense.. I like this direction from Riot, though I’m not sure if it will be enough to bring tanks back. Riot already tried this once with Quill Coat before making the interesting decision to remove it from the game and fail to replace it with a suitable bridge between Hunter’s Machete and Juggernaut. It’s likely that Riot will have to do more before tank junglers are in a good place.