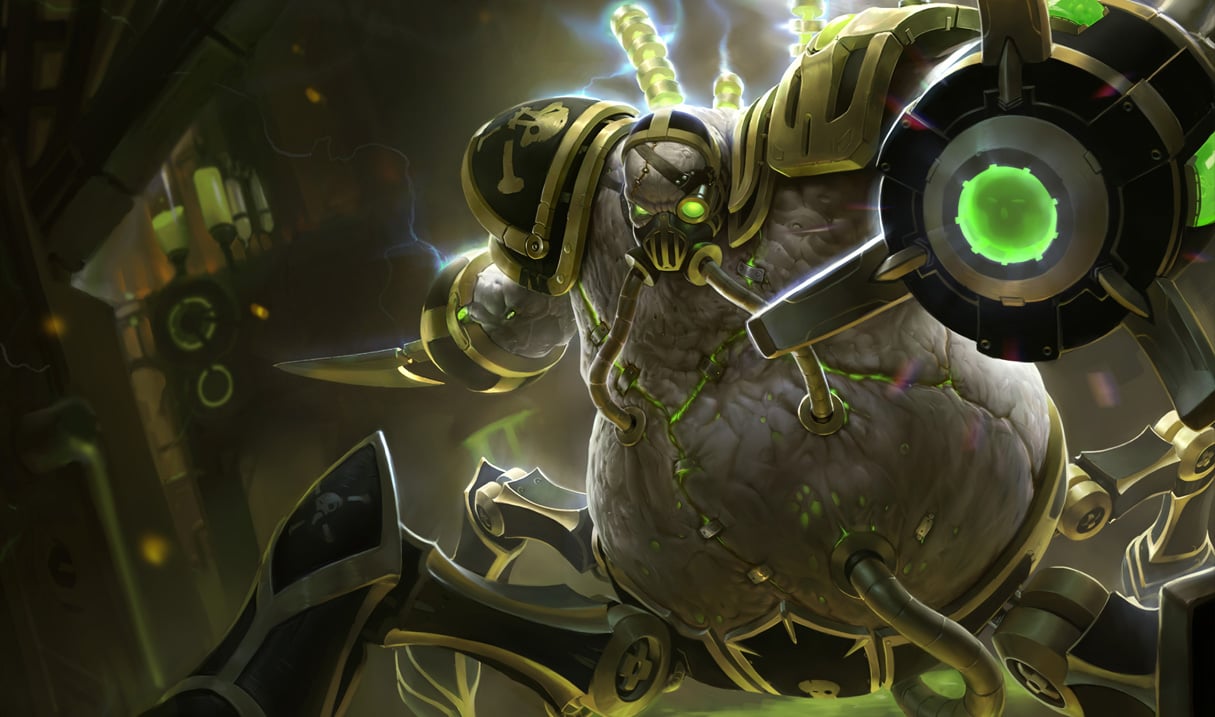 Many fans expected that TSM’s first LCS match against Gravity today would be a quick stomp for the IEM champions. However, Keane and his teammates would shockingly upset Team SoloMid. Although all of Gravity played well in their victory (particularly BunnyFuFuu and his spot-in Thresh hooks) e-sports fans naturally gravitated towards Keane’s shocking Urgot pick.

Although Keane’s Urgot would get crushed in lane by Bjergsen Zed after an unfortunate flash forward play under tower, the Urgot would quickly recover and become a deadly force as the game went on. It seemed like TSM simply had no answers for Keane’s poke and shutdown ultimate and lost the game after several ineffectual teamfights when trying to break Gravity’s sieges. This article will analyze Keane’s champion pick and how it fit into Gravity’s overall team composition.

He went 3 AD quints, 9 AD reds, 6 Health per level yellows, 3 Armor yellows, 6 MR per level blues, and 3 CDR blues. This rune breakdown might look like a very typical AD Carry page, but it actually featured several odd quirks atypical to both competitive play and Urgot in general. Due to much of Urgot’s damage coming from the base power of his Q, most Urgot mains will take armor penetration reds rather than AD. In addition, TSM’s composition did not feature any magic damage outside of minimal damage from Dyrus’s Dr. Mundo and Lustboy’s Lulu. The cooldown runes are to help push Urgot to spam his Q while the homing mark from his E is still remaining. Even a small amount of CD can mean the difference between 3 homing shots and 4 homing shots.

For masteries, Keane took a standard AD carry mastery page, with 21 points in offense and 9 points in defense. His offense tree featured some quirks. Taking points in both spell weaving and blade weaving in favor of warlord synergizes very well with Urgot’s tendency to weave auto-attacks and q charges when attacking his opponents.

For build path, Keane started off with a Crystalline Flask to help spam spells and establish a strong laning phase. Other than that, Keane went a standard Urgot build of Muramana into Frozen Heart into Last Whisper. The Frozen Heart was an extremely intelligent buy. Urgot scales very well with cooldown reduction because of his powerful ultimate and the spammy nature of his Q spell. The extra armor proved critical against the all-AD composition from TSM. Bjergsen eventually had to simply try and ignore Keane’s Urgot and go for Cop or BunnyFuFuu. Frozen Heart in conjunction with the bonuses gained from Urgot’s ultimate made hi almost impossible to kill.

For Summoners, Keane took Ignite and Flash, a typical combo for a champion trying to bully lane. Against Zed, it may have been more prudent to take Exhaust for further out-duelling potential, but Keane clearly was confident that he could intelligently use Urgot’s ult to counteract Zed’s Death Mark.

Fans of Keane or Saintvicious’s stream would have seen Keane spamming Urgot in solo queue. To many, it seemed like a simple troll pick, but Keane would actually play very well when given the metal crab monster. Urgot’s interesting skillset means that he can play very well into several quite disparate matchups.

Urgot’s passive reduces damage from opponents by 15% when he tags them with his auto-attack or his Q. In conjunction with his ranged nature and powerful defensive ultimate, Urgot is very potent counter-pick against assassins, such as Zed. (Interestingly, Keane’s beloved Hecarim is also a hard counter to melee mid laners.) While Urgot does have a relatively short auto-attack range, it is still much longer than that of melee champions meaning he will always have the advantage when it comes to harass, even without factoring in his powerful Q and E combo. In the game against TSM, Keane managed to hold even against the powerful Bjergsen on one of his signature champions until an overzealous flash to kill led to his death. (His homing poison ran out right as he flashed under Bjergsen’s tower.)

Most fans familiar with Urgot as an AD Carry would classify him as little more than a lane bully. By moving Urgot into a role where solely bringing damage isn’t paramount, the mechanical crab is allowed to truly shine. Urgot’s strengths against melee assassins is not limited to the laning phase. Because of his high base damages, he can itemize defensively (as seen by Keane’s early Frozen Heart rush) without sacrificing much damage. In fact, due to the new scaling on his W, Frozen Heart is an extremely powerful on him. The one-second surpress and 5 second Armor/MR buff means that Urgot is pretty much un-killable by the other team’s assassin and can also lock down opponents trying to kill his teammates in the backline. Using his ult to both peel for teammates and creatively engage fights with Flash, Keane made several game winning plays on TSM’s carry players, Bjergsen and WildTurtle.

The other reason GV used Urgot was to poke down the other team and dominate mid game teamfights. The armor shred from his W synergizes very well with Gravity’s double AD compositions. Although Dyrus was playing an infamously tanky champion on Dr. Mundo, it only took a single Thresh hook from Bunny for Keane to fire off a volley of missiles and reduce the titan into food for Cop. In addition, Urgot gains a significant power spike in the mid game upon completion of his Muramana, so he is very strong fighter during dragon fights. By scoring the first three dragons, Gravity was also able to compensate for some of Urgot’s weaknesses (lack of damage and mobility as the game goes on.) One weakness might be how buff dependent Urgot looked during the game against TSM. Because of his poor actual auto-attack range (with 425 range, Urgot will have a hard time attacking the tower on his own.) A lot of times, Keane would manage to poke TSM off the power but failed to do much damage. One of the hidden MVP’s of the game was actually the Baron buffed cannon minion. Keane was easily able to protect it because he could have killed anyone who went into range of it but he had a hard time knocking down the tower himself.

As a side note, the other character class Urgot excels against is immobile mages. On Keane’s solo queue account, he would often pick up Urgot against match-ups such as Twisted Fate. While Urgot would struggle mightily against a champion that could kite him out such as Orianna, a champ like TF has little escape outside of his stun card, and Urgot can easily close to gap with his Terror Capacitor slows and ultimate. We might see Keane pull out Urgot once again to simply mow down the other team’s immobile mages. After a single shot, there is usually no escape. One possible weakness here comes from Urgot’s build path. Frozen Heart is such a powerful item on him but against a double AP comp, he might not be the best pick even if he can score a favorable match-up in the middle lane.

Overall, Urgot’s very high innate tankiness means that he is a very powerful pick against assassins. His range also means that he can easily harass down melee picks and chase them down with his Q. His other main strength comes in matchups where he can closer the gap. He will struggle in lane against most mobile ranged champions that can kite him out. Although he is almost certainly best used as a counter-pick, his strengths are not limited to the laning phase – his potent armor shred and poke abilities means that he excels in siege situations and can be a powerful member of double AD compositions. His damage will spike prominently during the mid game, so Urgot players should try to force fights at those times. However, he may fall off in the late game if not played in the right composition and if his team fails to score the requisite Dragon and Baron buffs. Finally, his ability to build tanky while not sacrificing much damage and his powerful ultimate (which can be used for peeling) means that the man who gave up everything for Noxus is, quite naturally, a great team player.

How does Urgot fit in to Gravity?

Now that we’ve gone over how Urgot can be played, let’s look at what Keane’s rising Urgot pick can mean for Gravity as we head into the LCS playoffs. It’s important to note that while Keane’s innovative Urgot pick was extremely impressive, he wasn’t the only important factor in the teams win today. BunnyFuFuu’s brilliant engages and repeated Thresh hooks onto seemingly every TSM member (as well a game-swinging 3v5 teamfight from TSM after a timely TP Hauntzer) were other crucial factors in Gravity’s win today.

However, this newfound pocket pick for Keane is sure to keep Gravity’s opponents on their toes. Keane has always had a somewhat eclectic champion pool. When climbing the Korean solo queue ladder, he was known for only playing Kassadin, Nidalee, Orianna, and Hecarim. All four of those champions have stayed with Keane as his signature picks, but the first two have recently been moved out of the mid lane role due to Riot balancing changes. While he has had some great performances on Zed, he’s somewhat struggled in adding new champions to his pool such as his  Viktor. With another pick he can perform at a high level on, opponents will be forced to respect an already high pressure Gravity pick-ban phase. (Several of Keane’s teammates also feature extremely deadly champion picks such as Hauntzer’s Maokai, Saint’s Jarvan IV, and Bunny’s Thresh/Morgana.) Most notably, with both Hecarim and Urgot available as picks for Keane, opponents will be extremely reluctant to pick Zed, one of the strongest champions in the current meta. This also leaves Zed available for Keane himself – as outlined earlier it is one of his strongest champions.

It’s important to note that the problem isn’t necessarily a “shallow” champion pool from Keane. The Oceanic superstar is able to play most champions, but he only truly excels on a handful that allow him to creativity flank and crush the other team’s backline. His ability to engage fights on champions like Zed or Azir were critical to Gravity’s success – they prefer to play with as many engagers as possible. Today, we saw what could happen with Keane playing an actual tanky engage champion! I broke down Gravity’s gameplay here, and while their players have seen improvement in both an individual and macro rotation sense, little has changed about how they prefer winning games. Gravity’s calling card has always been their fantastic teamfighting, which spawns from the fact that four of their members (Cop excluded) love starting teamfights. Speaking of Cop, let’s not forget that he was a pretty decent Urgot player back in the days of Season 2…possible flex pick incoming?