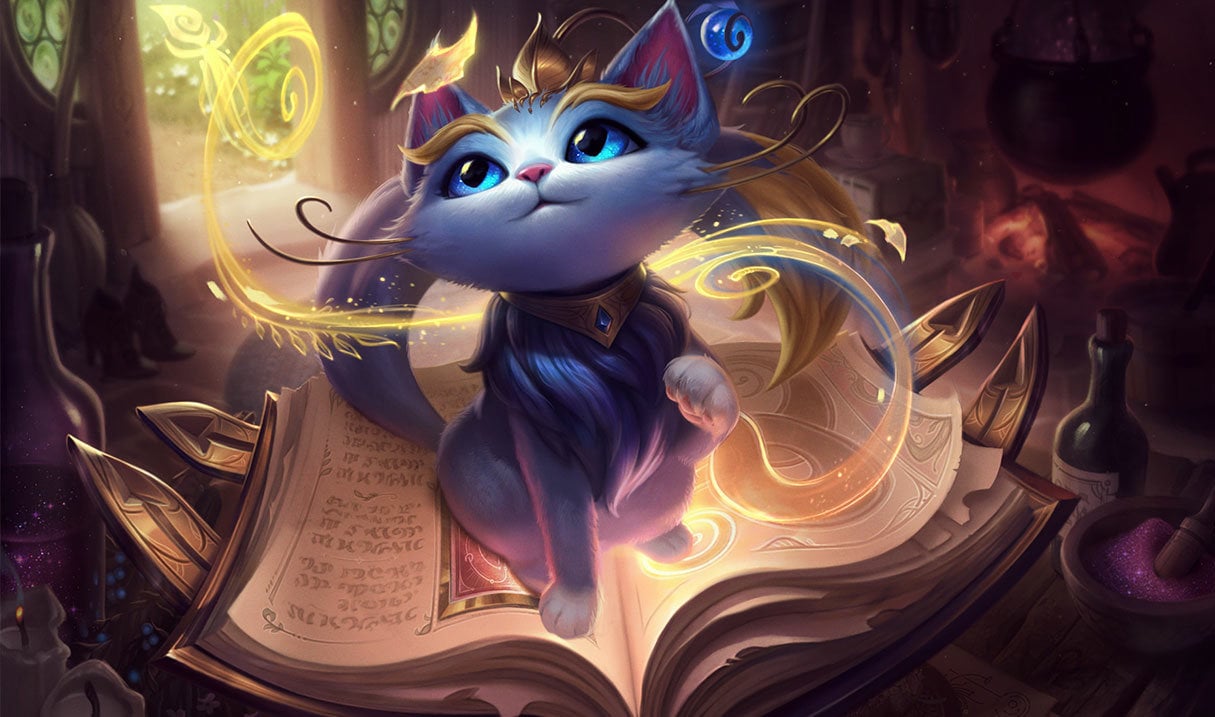 Since her release in 2019, Yuumi has become one of the most polarizing champions in League of Legends. Due to her unique playstyle of being untargetable in 80 percent of games while providing massive heals, many players actively despise seeing a Yuumi on the enemy team.

Luckily for the Magical Cat, multiple massive nerfs were not enough to get rid of all nine of her lives. While not as popular as she has been in the past, Yuumi remains a powerful support pick with certain ADCs that can completely take over the bot lane and snowball a lead in others.

She may not be the most viable option for every team composition, but the use of Yuumi’s passive—which gives her mana and a shield for basic-attacking enemy champions—separates a good Yuumi player from a great one. These types of players can quickly find the carry on their team and help them snowball their leads, rather than focus solely on keeping their ADC ahead.

Here is the current best build for Yuumi in League.

Keystone—Summon Aery: Most enchanters opt for Summon Aery due to the extra protection it provides allies when they are healed or shielded. Yuumi is no exception to this rule thanks to the large heals she can provide with a single tap of her E. She also gets value off of this keystone rune when damaging enemies, which most of the time will be unable to target her back.

Manaflow Band: Yuumi’s biggest struggle is balancing her mana usage. Her Q and E use an immense amount of mana each, often making Yuumi’s early game a bit weak if players aren’t using her passive correctly. Manaflow Band helps to mitigate some of this mana lost, but doesn’t solve the problem the way that items can.

Transcendence: Yuumi wants to use her abilities as often as she can. With Transcendence, Yuumi is given additional Ability Haste as the game goes on that allow her to use abilities faster. This pairs nicely with many of the items she will be building that also include Ability Haste alongside their other bonuses.

Scorch: When attached to an ally, Yuumi becomes untargetable. This also allows her to control the direction of her Q, which, before gaining access to her ultimate, is her only damaging ability. Scorch allows Yuumi to do a little extra damage to enemies hit by her Q in the early game and possibly help to set up positive situations for her ADC.

Presence of Mind: Similar to Manaflow Band, Presence of Mind rewards Yuumi with mana when attacking enemy champions. This should be used in tandem with Yuumi’s passive, which has the same effect—also granting Yuumi a hefty shield that can be transferred to an ally.

Cut Down: Yuumi has one of the lowest base health stats of any champion in League. This, combined with the untargetability associated with her W, makes Cut Down a great option for dealing chip damage to enemies that are unable to retaliate efficiently.

As the traditional enchanter support starting item, Spellthief’s Edge rewards Yuumi for poking her enemies with basic attacks and abilities. It also gives Yuumi decent mana regeneration that may be crucial in winning early-game trades.

While Yuumi will want to be attached to her ally for most of the laning phase, she will need to bounce off them to activate her passive. During that time, she may be the recipient of some damage from enemies that finally have a chance to attack her. Health potions should be saved for these moments instead of using E on yourself.

Yuumi is entirely reliant on her allies for movement while she is attached. This may make warding difficult throughout the game, but nevertheless, as a support, it should be incentivized to ward at any safe moment.

What makes Yuumi so powerful in the mid-to-late game is her synergy with Moonstone Renewer. While she already has an enormous heal in her kit, Moonstone Renewer makes it even more powerful and gives a portion of that heal to nearby allies. This effect, combined with Yuumi’s ability to jump freely between allies to heal them, can ensure that your team’s health bars are always filled.

Grievous Wounds have become a necessity due to the increase in healing available in League. Yuumi can trigger this effect easily by using her attached Q or her ultimate on enemy champions, stopping the healing they may be receiving from their supports. It also gives her substantial mana regen, which will give her more access to her abilities.

These quintessential enchanter support items are crucial on Yuumi, though can be bought in any order depending on your team composition. These items take advantage not only of Yuumi’s E but the Summon Aery keystone as well, giving her allies major buffs to their damage and attack speed when healed or shielded—and grant Yuumi even more mana regen.

This powerful support item allows Yuumi to get her or her allies out of sticky situations when made immobile by enemies. If the enemy team has substantial access to crowd control, this item should be purchased immediately before anything else.

One of the many perks Yuumi has is her ability to jump seamlessly between allies in team fights to heal them or activate various rune and item effects. Redemption capitalizes on this effect further, giving her access to a wide-range heal for all allies at once, possibly changing the tide of team fights in seconds.