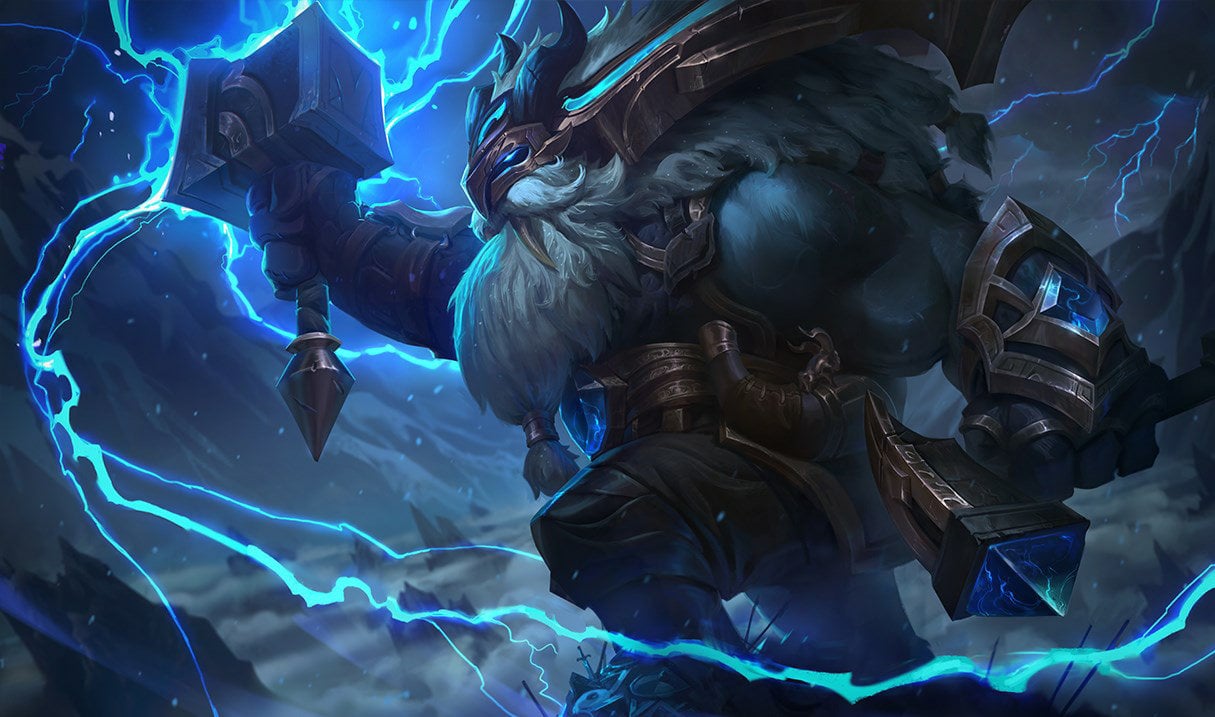 Ornn is one of League of Legends’ most formidable tanks. With respectable scaling on all his defensive statistics, Ornn has the potential to be a threat right from the start of any game. On top of that, his abilities deal a surprising amount of damage, allowing him to pack a relatively heavy punch when compared to most of the game’s tanks.

Ornn is strong during all phases of a League game but truly shines as a teamfight-dominating, nearly unkillable late-game tank. His kit, which is highlighted by his incredibly strong ultimate and its trademark sound effect, is immensely disruptive and difficult for most players to deal with. Since his release four years ago, Ornn has been one of the most popular picks in high-level play and on the competitive stage over the last three years.

From runes, items, and champion counters, here’s everything you need to know about mastering Ornn in your solo queue League games.

Grasp of the Undying: The extra damage attached to Grasp of the Undying’s enhanced auto attacks is going to be extremely valuable in lane. Additionally, the stacking HP you receive from this rune adds up after a while, and with most of your itemization focusing on armor and magic resist, Grasp will serve as a respectable source of extra health.

Demolish: Ornn’s pushing power isn’t all too eye-catching but a booster like Demolish definitely increases his damage to turrets and ability to snag some early-game plates.

Bone Plating: This rune gives you a boost of early-game survivability, allowing you to be more durable in skirmishes before your items fully come online.

Overgrowth: There’s no shame in getting a few more extra hit points passively. Overgrowth is one of Ornn’s most notable low-risk, high-reward runes, especially when all of that extra HP accumulates in the late game.

Biscuit Delivery: Getting a few pseudo-potions for free via Biscuit Delivery could end up giving you enough sustain to stay in lane for an extra minion wave or two.

Magical Footwear: Ornn’s build is fairly expensive, so having to not worry about an extra investment for a basic pair of boots should relieve some of that gold-related stress.

The standard combo for any top lane tank or bruiser, Doran’s Shield and Health Potion will give you enough early-game durability and sustain to farm and trade effectively. You’ll ideally want to have at least 1,500 gold in your back pocket before recalling.

Sunfire Aegis is Ornn’s most desirable Mythic item. With bonuses to your health, armor, magic resist, and ability haste, Sunfire Aegis is perhaps the most well-rounded Mythic item in League. Not only will it help you stay alive thanks to the inlaid tanky bonuses, but you’ll also be dealing a sneaky amount of damage to champions in drawn-out teamfights through its passive, Immolate.

League’s signature armor-boosting item, Thornmail, is a must-have for a frontline tank like Ornn. Being able to deal damage to any enemy champion who attacks you while applying Grevious Wounds is a direct counter to any AD carry who even steps in your direction.

You’ll want to pick up a Tear of the Goddess as soon as possible on Ornn since his mana costs are relatively high for a tank. Preferably after your first recall, you’ll need to be stacking your Tear and working toward your late-game Fimbulwinter. With much-needed flat increases to your health and mana pools, this item is a must on any spellcasting-focused tank like Ornn

Against AD-heavy compositions, Plated Steelcaps are an unrivaled option for tanks like Ornn. But if you find yourself in the need for extra Tenacity or up against a fed mage, don’t hesitate to make the on-the-fly swap to Mercury’s Treads.

A whopping amount of health and magic resist come attached to Force of Nature. If you’re noticing the enemy team’s AP carry is starting to get themselves ahead, you’ll want to slam this item and prevent them from one-shotting you with a barrage of abilities.

There aren’t many tank items in League that are more iconic than Frozen Heart. With boosts to your armor and mana, as well as an extra passive that decreases the amount of damage you take from all attacks, this item is a no-brainer in late-game builds for Ornn.

The ability to mark an enemy player and reduce their Tenacity while they stand near you is really useful against hard-to-kill opponents who need to be chain-CC’d in teamfights.

Extra tankiness is one thing, but an added active AoE slow is another way to keep enemies CC’d. If you’re having trouble keeping enemy champions locked down in extended teamfights, consider adding Randuin’s Omen to your build.

This item is at its strongest when you’re behind and need to be as tanky as possible against quick but deadly bursts of damage. Keep in mind that it comes with a heavy price point, though, and may not be worth the investment if you and your teammates are struggling to earn gold.

Ornn struggles mostly against champions who spawn into Summoner’s Rift and are already poised to do some early-game damage. Champions like Tryndamere, Darius, Irelia, Gangplank, and Aatrox—all of which are early-game all-stars—can stick onto Ornn with their gap closers (if they have them) and bully him with auto attacks and heavy-hitting abilities over and over again.