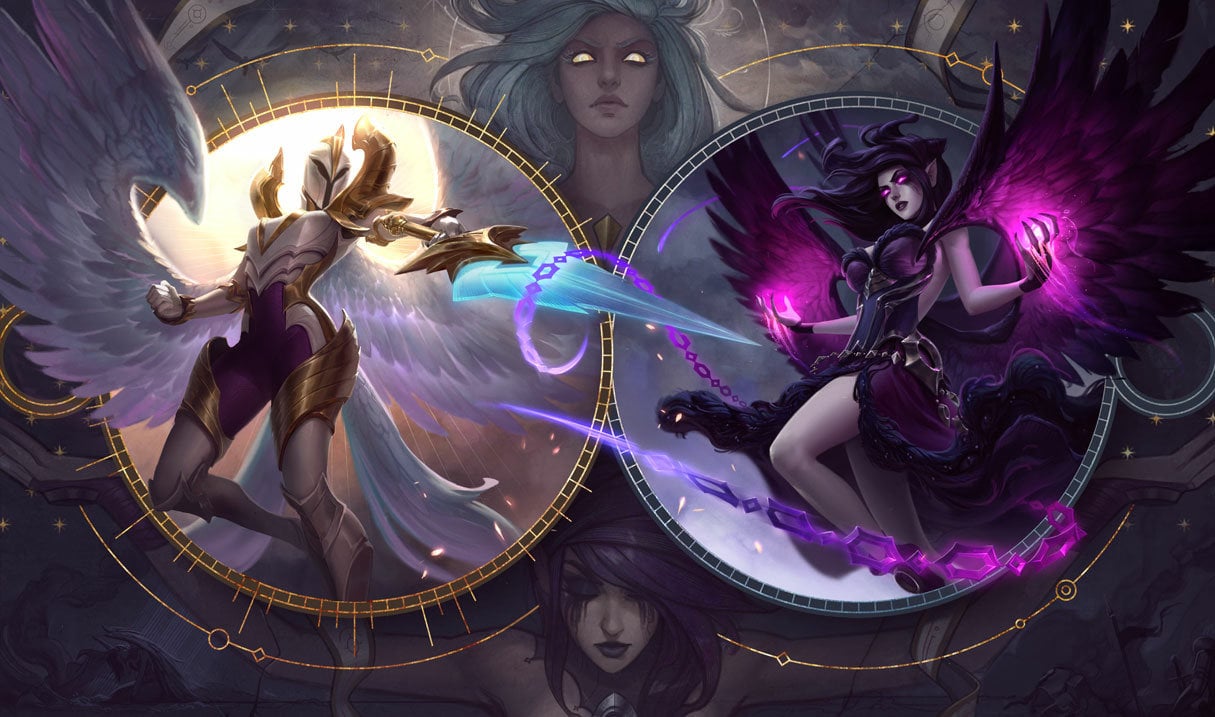 For over 13 years, Morgana has terrorized the bot lane of League of Legends with ease. While her sister Kayle triumphs with light on other parts of the Rift, Morgana seeks to trap her enemies in bindings of darkness.

With a simple-yet-effective kit, Morgana is a support champion that nearly any player in League, regardless of their familiarity with the game, can pick up with ease. Yet what separates a casual Morgana player from a great one is their ability to bring out the full potential of her kit, from hitting clutch bindings to ensuring her Black Shield is prepared to protect allies.

Though players may joke that Morgana’s roots can last for years at a time, successfully hitting a combo with Morgana can truly lock enemies in place for long durations and prevent them from retaliating. Thanks to her utility and a surprising amount of damage, Morgana remains ever-present in the support role and can serve to completely negate entire kits of enemy champions.

Here is the best build for Morgana in League.

Arcane Comet: Morgana’s W serves as the main way she pokes out her enemies in lane. The large puddle deals damage over time to whoever steps in it, which can deal tremendous damage at early levels to enemies that walk through it. Every 20 seconds, hitting an ability like W will proc Arcane Comet to deal additional damage in a small area, making Morgana’s poke, which goes through minions, a powerful tool for nearly all points of the game.

Manaflow Band: Like most mage supports, Morgana is heavily reliant on using her abilities to help her allies and hinder her opponents. Unfortunately, this takes a massive toll on her mana costs that her support item can only do so much to fix. The Manaflow Band rune helps to mitigate some of the early-game pains of mana costs, enabling her to use her abilities more frequently without having to back for mana.

Transcendence: Morgana has a small amount of ability haste with an effect that her W has, reducing its cooldown as the ability activates her passive on enemy champions. Outside of that, Morgana is reliant on external ability haste to let her lock enemies in place with ease, making
Transcendence a great option in the Sorcery tree. This rune passively grants Morgana ability haste as she levels up, then rewarding her flat cooldown reductions on non-ultimate abilities for takedowns at level 11 and beyond.

Scorch: Scorch works with Arcane Comet to catch enemies off-guard with Morgana’s early-game damage potential. This rune works better on Morgana than other champions due to her W’s ability to go through minions, where other mages may be hindered by minion block.

Perfect Timing: Morgana can continue casting her ultimate ability, which locks all nearby allies in place after a short duration when she is undergoing the stasis condition. Perfect Timing grants her a free Stopwatch after 14 minutes that can be comboed nicely with her ultimate. She can also get it two minutes faster for each takedown she is a part of, including assists.

Biscuit Delivery: This rune helps to further mitigate early-game mana deficiencies that Morgana players will face for using their abilities. It also grants Morgana a bit of health, acting as a secondary yet not-as-powerful health potion that is automatically added to her inventory every few minutes.

Spellthief’s Edge: Though this is the normal starting item for mage supports, the most value that comes from this item in the early stages of the game is its passive mana regeneration. Though Morgana will suffer with her high mana costs regardless of how many mana regeneration items she has, each will lessen the blow slightly. This item will also grant Morgana a large amount of gold for damaging enemies and structures, then evolving to provide wards after accruing enough gold.

Health Potions: Morgana’s passive heals her when she deals damage to enemy champions, cannon/super minions, and certain jungle monsters. The amount is not too substantial that it will save her in most fights, so players should opt for health potions to deal with lane poke from enemy champions and ensure that Morgana can continue to do what she does best.

Stealth Ward: As a support, part of Morgana’s job is to keep an eye on her immediate surroundings, protecting herself and her lane partner from possible ganks. While she lacks mobility options outside of the Flash summoner spell, she has access to the utility that can stop enemies attempting to catch her while warding. With an upgraded Spellthief’s Edge, Morgana can place up to three wards at a time and have access to a handful of them at once.

Zhonya’s Hourglass: The core of any Morgana build is Zhonya’s Hourglass. While not a Mythic item, Zhonya’s provides Morgana with an upgraded version of the stasis Stopwatch provides, alongside a number of stats that the component items provide. The Stopwatch that Perfect Timing grants Morgana also gives her a bit of gold towards Zhonya’s, incentivizing it as a first-buy.

Liandry’s Anguish: Another staple item for Morgana for many years has been Liandry’s Torment, an item that burns enemies struck by abilities and takes Morgana’s poke potential to new heights. This item has evolved into the Mythic item Liandry’s Anguish, increasing the stats it provides as well as the potency of its burn. It also has a new passive, which increases the damage Morgana does with her abilities on enemies with a surplus of bonus health, helping her widdle-down enemy tanks for her allies to capitalize on.

Sorcerer’s Shoes: Morgana’s poke damage grows as she accumulates more ability power, but enemies often take this into account and purchase magic resist items to mitigate that damage. Sorcerer’s Shoes, on top of giving Morgana more speed, provides her with an ample amount of magic penetration at a low cost which will break through certain amounts of magic resist.

Morellonomicon: Grievous Wounds continue to be one of the most important effects in League as a means of shutting down enemy healing. With so many champions in the game capable of healing themselves for tremendous amounts, most players want to bring Grievous Wounds-inflicting items to counter it. Morgana can inflict Grievous Wounds easier than most other champions, thanks to her W going through minions in a large area.

Rylai’s Crystal Scepter: With Morgana’s W in mind once more, Rylai’s Crystal Scepter gives Morgana a substantial buff to her supportive capabilities. When damaging allies with an ability, they will be slowed slightly, allowing for her and her allies to capitalize on those trying to get away or preventing them from catching up.