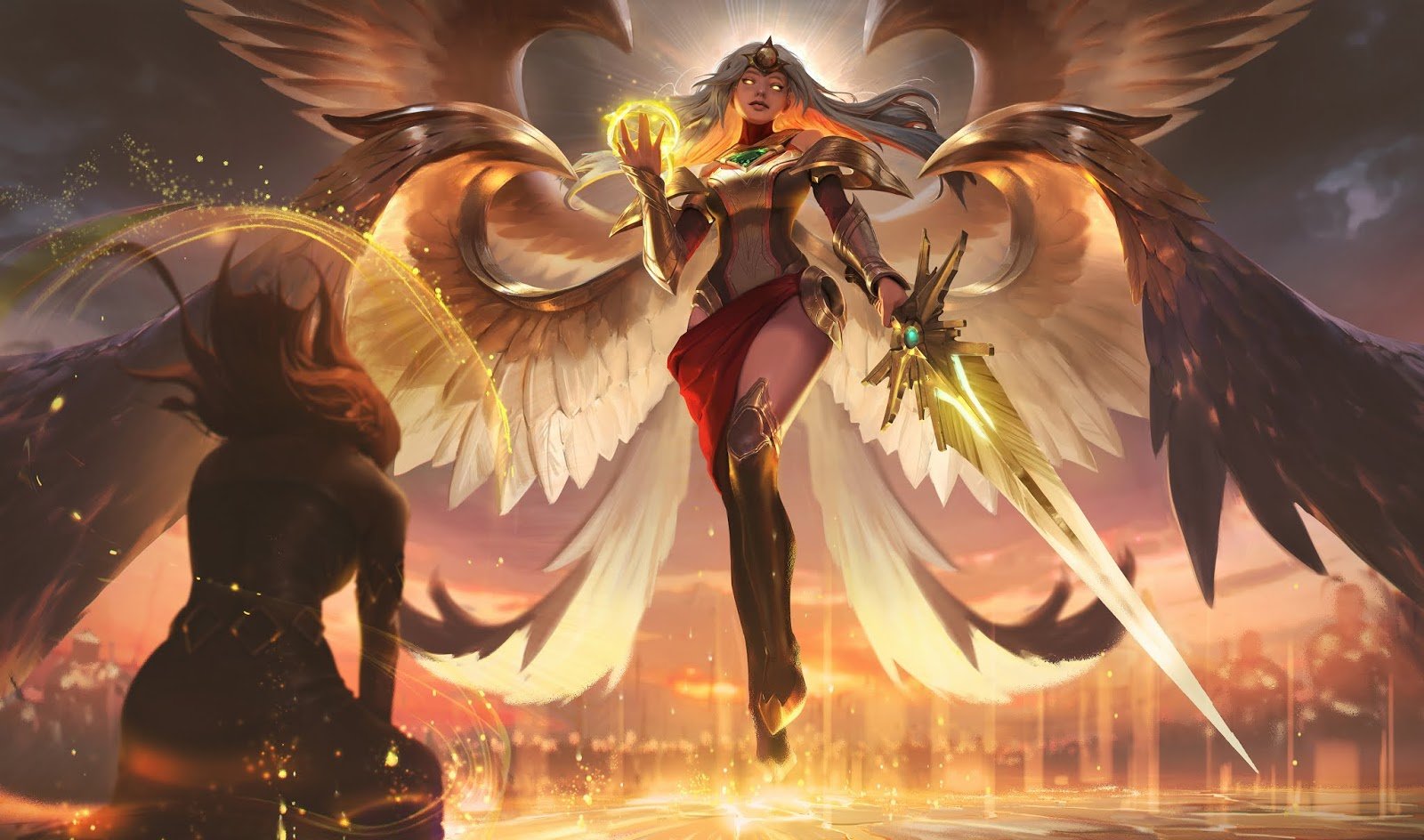 Kayle is one of the strongest top laners in League of Legends. She possesses incredible solo carry potential if she’s utilized well and allowed to go into the late game. There are, however, a bunch of ways to shut her down early, and Kayle players need to watch out for enemies trying to hunt her down in the first 20 minutes or so of the game.

As always with the champions that have a “one-vs-nine” ceiling, Kayle is easy to learn but hard to master. Her build paths and even rune choices require in-depth game knowledge. Players will need to evaluate the state of their games all of the time, diversifying the items they choose and how they play around the map and objectives.

Nevertheless, if you manage to get to the late game, the chances of someone stopping you are low. There are a few instances here and there where you might be in danger, but overall, with the right items and runes, you should be just fine. The only thing you need to watch out for are strong crowd control tools. If you get hit by one, you might get eliminated without even having a chance to use your ultimate—so be careful with champions with these abilities.

Other than that, Kayle should be unstoppable after the 30-minutes, and a perfect example of why you never let scaling champions get to the late game.

Here’s the best build for Kayle in League of Legends.

Lethal Tempo: The main aim of playing Kayle is to get to the late game, where she can show her true form and shred through the enemies with her powerful basic attacks. Therefore, the best rune to pick for her is Lethal Tempo. With it under your belt, you will gain stacks of attack speed with every auto attack. When the maximum stacks are reached, her attack range will exceed by little, making her even more dangerous.

Triumph: This is a pivotal rune when it comes to outlasting enemies in teamfights. With Triumph, you will replenish 10 percent of your missing health with every takedown, which can make an enormous difference in the later stages of the match. Additionally, it will also grant you 20 gold with every takedown.

Legend: Alacrity: Attack speed is extremely important on Kayle, so it only makes sense to choose Legend: Alacrity as one of your runes. With that, you will gain attack speed for every Legend stack, which is obtained by killing champions, epic and large monsters, and minions. You can have a maximum of 10.

Last Stand: Due to Kayle’s gameplay, which will require you to go in the middle of teamfights and look for squishy targets, the champion will frequently be at low health, especially due to your ultimate, which makes you invulnerable for a few seconds and should be used in situations like these. Last Stand makes you deal more damage while you’re low, so it’s just perfect on Kayle.

Conditioning: Having Resolve as your second rune tree is key to surviving to the late game. After the 12-minute-mark, it gives you nine armor and magic resistance and increases both of those stats by four percent.

Overgrowth: With Overgrowth in your rune choices, you will absorb life essence out of monsters and minions that die nearby. For every eight, you will be gifted three maximum health, and once you reach full stacks (120), you will gain an additional 3.5 percent of maximum health, which will come in handy for Kayle.
Bonuses: +10 percent attack speed, +9 adaptive force, +6 armor

Corrupting Potion: For Kayle, surviving the early game without a scratch is a success, and even if you do take some hits here and there and die a few times, it’s still easy to score a comeback later on. Nevertheless, in the laning phase, you will usually need as much sustain as possible. Therefore, Corrupting Potion is the best pick in most matchups.

Doran’s Ring: Sometimes, Kayle will find herself in a favorable matchup, though, it won’t be often. In games like these, you might think about grabbing a Doran’s Ring and two Health Potions but beware of the enemy jungler, who can always make your laning phase a nightmare.

Health Potions: If you pick Doran’s Ring as your starting item, it’s always helpful to have a bit of extra health in your inventory in the form of Health Potions.

Stealth Ward: Being aware of potential nearby threats is important for every top laner, Kayle included. To grant yourself a bit of vision in the river area, pick a Stealth Ward once you load into the game.

Riftmaker: Without a doubt the best mythic item for Kayle. Riftmaker increases almost all of your major statistics, including ability haste, ability power, health, and omni vamp. It also empowers your legendary items with two percent omni vamp and eight percent ability power. Its unique passive makes Kayle deal additional damage in combat as well, and while reaching full stacks, it converts that damage into true damage, making her a big threat in the late game.

Nashor’s Tooth: Another pivotal item for Kayle, Nashor’s Tooth is like no other item in the game, since it boosts both ability power (100) and attack speed (50). Therefore, picking it early, even as your first item, is worthwhile for Kayle. It also makes your basic attacks deal bonus on-hit damage.

Berserker’s Greaves: Ability power-reliant items don’t really increase your attack speed, except for Nashor’s Tooth. While you have some runes that enhance that stat, it still needs a little boost, which it will get with Berserker’s Greaves (35 percent).

Rabadon’s Deathcap: Almost every AP-based champion in League dreams of finishing their build with Rabadon’s Deathcap, and the case is no different with Kayle. With the 120 ability power it comes with and the passive to increase your overall ability power by 35 percent, this item is a final nail in the coffin of your enemies once the late game comes around.

Zhonya’s Hourglass: Despite having your ultimate, which grants you invulnerability for a while, it’s still worth having a Plan B on Kayle. Zhonya’s Hourglass is a perfect choice when looking for some extra safety. Besides gifting you with its incredible active ability, it also enhances your major stats, like ability power and ability haste, while giving you a bit of armor, which is helpful in the meta.

Rylai’s Crystal Scepter: Kayle suffers from having no real gap closers other than some extra movement speed from her W. Therefore, in many games in the meta, where mobile champions are common, it’s a good idea to pick up some tools to slow your opponents down, like Rylai’s Crystal Scepter. This item boosts Kayle’s stats and makes her slow down enemies with her abilities (and empowered auto attacks).

Wit’s End: Sometimes, you might need some extra attack speed, for example in games against really squishy champions that you should aim to eliminate quickly. In those instances, Wit’s End is tremendous, since it grants you another 40 percent of attack speed. It doesn’t come with ability power, but instead with attack damage and magic resistance, which Kayle can use as well.

Lich Bane: From time to time, players may find themselves playing games against opponents that rely on skillshots. In those matches, mobility is crucial, and Kayle might struggle with it. In those cases, picking Lich Bane might not be a bad idea, especially since it increases your AP and ability haste and makes your attacks empowered after using an ability. With it in your inventory, you might finish some enemies before they even try to escape.

Void Staff: Like every AP champion, Kayle can benefit from Void Staff if the enemy squad has a lot of magic resistance. If you find yourself in an AP-heavy composition, don’t hesitate to pick it up, since it will definitely come in handy.

Jax is the perfect counter to Kayle, since he’s incredibly strong in the laning phase and during the mid game, and has great tools to shut down Kayle. His Q and E make it easy to close the gap between the champions, so Kayle players will need to watch out for his cooldowns. Jax also transitions well into the mid game and can roam quickly, so he will rapidly take over the map if you allow him to snowball early. Kayle will still win a late-game duel, but in the first minutes, try to avoid trading with him and use your ultimate to survive at all costs.

Renekton is a popular top lane bully, especially against weak champions early like Kayle. With his E, he has a lot of mobility in the laning phase, and his easy W and Q combo can cut through your health bar. When playing against Renekton, don’t get close to your minions, since he will use them as tools to close the gap. Try to stack armor early when you can and freeze the wave nearby your turret. Also watch out after Renekton reaches level six since he can get really tanky with the ultimate, and it’s easy for him and his jungler to dive you.

Irelia is another extremely mobile champion in the laning phase that wins almost every trade if she gets close to you with some Q stacks. Furthermore, if she lands her E stun on you, you’re most likely dead. This is a tough matchup for Kayle, where she needs to be as safe as she can. Try to freeze the wave as much as you can. You should even consider lane swapping with your mid laner.

Camille can cut the distance between you in a span of two seconds with her E. Afterward, trying to trade with her won’t be easy since she can deal true damage and will also be most likely be shielded. Try to hit her back when she misses her E or when she goes back to farm, but never engage in one-vs-one duels in the laning phase.