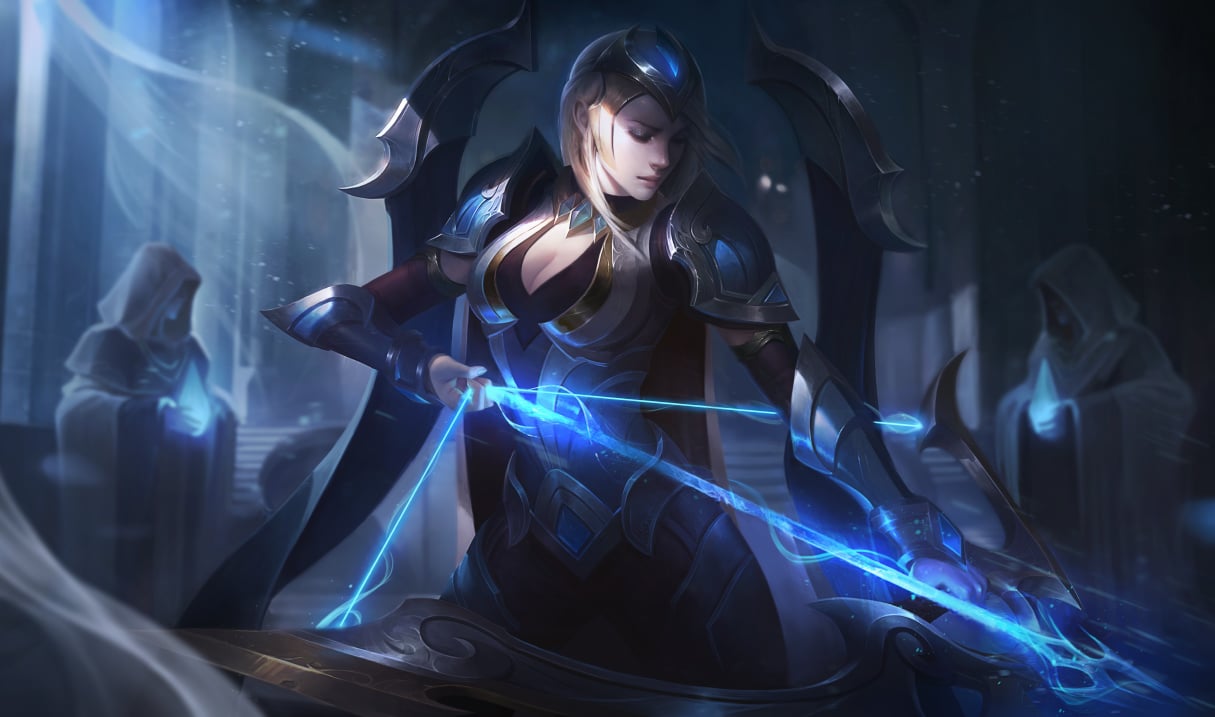 Ashe was one of the first champions to make it onto Summoner’s Rift, being released as early as 2009 with the first version of League of Legends.

Since then, the game has seen a lot of changes, and so has the Frost Archer. Ashe’s kit today is quite different from the one she had during the first years of the game. Yet her core aspects, like her global, stunning ultimate, remain unchanged.

Like with many AD carries in the game nowadays, it takes time to master Ashe. Her abilities require a bit of mechanical skill to be used efficiently, especially when it comes to her ultimate. Nevertheless, with a proper build, players can quickly climb the solo queue ladder, and we’re going to take you step-by-step through the best Ashe build currently in the game.

Lethal Tempo: Ashe possesses a powerful crowd control tool in the form of her ultimate. Once you hit an enemy with it, your main weapon will be auto attacks, which can be boosted with your Q and passive. Thus, to increase the damage you deal with your auto attacks, it’s best to grab Lethal Tempo as your main rune. With it, you will gain attack speed with every auto attack on the opposing champion, which stacks up six times. Afterward, it will grant you additional attack range, which always comes in handy on champions like the Frost Archer.

Presence Of Mind: This is a vital rune for many ADCs that are mana-hungry, and Ashe is definitely one of them. With Presence of Mind, you will influence your mana regeneration every time you hit an enemy with an ability, and you will be spamming your Ws quite a lot, especially in the laning phase. With that rune, you get 15 percent of your maximum mana restored with every takedown.

Legend: Bloodline: When you’re playing marksmen, it’s important to have a bit of lifesteal, since you won’t be building tanky items but rather those that increase your damage. With Legend: Bloodline, you will enhance your lifesteal with every legend stack, which are collected by securing champion takedowns or large monsters.

Coup De Grace: While playing Ashe, the quicker you cut through the enemy team’s frontline, the better. Therefore, having this rune, which makes you deal more damage to opponents who are below 40 percent of their max health, can do wonders in achieving that goal.

Biscuit Delivery: Having some extra sustain early in the game is pivotal on almost every champ in the game, especially on ADCs, who are quite vulnerable to ganks. To grant yourself a bit of health and mana, pick Biscuit Delivery, which refills those two attributes and increases your mana cap by 50.

Approach Velocity: This one isn’t often picked on marksmen, but on Ashe, it makes a lot of sense. Approach Velocity enhances your movement speed towards enemies that are impaired and looking at how Ashe relies on her ultimate, you should be doing that quite a lot throughout your games.

This is the best choice to go for when beginning the game on an ADC. With it in your inventory, you will have an additional eight attack damage, 80 health, and 2.5 percent omnivamp, which should greatly increase your potential in early trades. Simply speaking, there’s no better item to pick up early when playing Ashe.

Everyone needs some health every now and then—and Ashe is no exception. With a Health Potion under your belt, you will have something to replenish your health after a two-vs-two skirmish or a gank from the enemy jungler. If you’re having a tough time in lane, don’t hesitate to pick a few more during your first recall to the base.

There are a few options regarding the Mythic items on almost every champion in today’s meta. The case is no different on Ashe, but we believe that Immortal Shieldbow is the best one right now.

With it in your inventory, you’ll increase your major stats by a great amount (50 AD, 20 percent attack speed, 20 percent critical strike chance, and eight percent lifesteal). You’ll also have some additional passives that go alongside Ashe’s kit perfectly. First, with Immortal Shieldbow, you’ll receive a shield once you’re dropped below 30 percent health, as well as some bonus AD. Additionally, each of your legendary items is going to grant you five AD and 70 health points.

As explained, auto attacks are the base of Ashe’s gameplay. Thus, there are hardly better boots to choose than Berserker’s Greaves. With 45 movement speed and 35 percent attack speed, they give you all that’s needed on the Frost Archer.

Berserker’s Greaves won’t be enough bonus attack speed for you to become a dangerous marksman. To achieve that goal, this statistic needs to be at a high level. Thus, having one more item that boosts it is compulsory. And the best one to go for on Ashe is Runaan’s Hurricane.

With its unique passive, which makes you shoot extra auto attacks into nearby enemies, it’s perfect for taking care of the enemy bruisers, fighters, and tanks that will dive you. It’s also extremely efficient when clearing minion waves.

This item is similar to Rabadon’s Deathcap for ability power-based champions. It’s a great pickup in most of your matches, especially in the late game. Before you pick up Infinity Edge, you will already possess some items that increase your critical strike chance. Thus, Infinity Edge’s passive, which will enhance this stat by a bonus 35 percent, will be turned on, making each of your auto attacks a critical strike. It also grants you 70 attack damage. This item is a superb choice for late-game Ashe.

Now that players have some greatly-needed damage in their inventory, it’s time to pick up some survivability that will be needed in late-game battles. In terms of ADCs and Ashe especially, the most sensible item to go for is Guardian Angel. Its building path features Stopwatch, which should be picked as the first item when going for GA due to its unique, single-use active ability that will allow you to survive a fight in most cases. Once completed, GA will bring you back to life with a five-minute cooldown, which can make a tremendous difference post-30 minutes.

Usually, this is the wisest way to finish your build on Ashe. It grants you 40 attack damage, 25 percent attack speed, and eight percent lifesteal, which are the key stats on the Frost Archer. BOTRK also makes you deal extra damage with every auto attack, which always comes in handy on Ashe.

This is another Mythic item that you may think about instead of Immortal Shieldbow. Kraken Slayer excels most when you’re playing against a composition that isn’t threatening to you since instead of a shield, it gifts you with attack speed and more attack damage with every third hit.

In cases where you really want to go all-in, it’s wisest to pick Galeforce. With its active ability, you are going to have a dash that will allow you to close the gap between you and your enemies. Nevertheless, as Ashe, you will rarely find yourself in a position to spearhead during teamfights, so this should be your last alternative in terms of Mythic items.

Nowadays, AP mages are popular in the mid lane, with a few of them also appearing in other lanes. Thus, sometimes it might be tough to sustain their damage. So, in matches against ability power-based team comps, it’s sensible to sacrifice Berserker’s Greaves for these shoes. They also grant much-needed tenacity.

As we said, there are a lot of AP-based compositions in the game right now. And while having Mercury’s Threads is helpful, sometimes it’s better to just pick up Wit’s End instead of one of the late-game items. It gives you magic resistance as well, while boosting your AD, attack speed, and giving you an on-hit bonus magic damage passive.

If you find yourself in a game where the enemies have too much healing, don’t hesitate to pick up a Mortal Reminder. It applies Grevious Wounds to your opponents, which is the best way of dealing with such compositions.

This is the best item to choose when you’re in great need of armor penetration since it grants you 35 points of this stat. Outside of that, it also enhances your attack damage and critical strike chance and has a unique passive with which you will deal more physical damage.

This item should be picked instead of Runaan’s Hurricane if you want to focus on single targets instead of multiple ones. But besides increasing your attack speed, it also converts your critical strike chance into additional damage, so it’s great with almost every build on Ashe since you’re looking to have 100 percent of that stat either way.

This is a great option when you’re looking for one-vs-one duels or when the enemy team has assassins that may flank you. It boosts your major stats and grants you movement speed. Additionally, it has a passive that for a short amount of time enormously increases your attack speed, which in duels can mean the difference between life and death.

To wrap up the build, we have Bloodthirster. Its main goal is to increase your lifesteal, and it does so perfectly since it gives players 18 percent of that stat. So if you’re desperately in need of a lifesteal, purchase Bloodthirster in the late game.