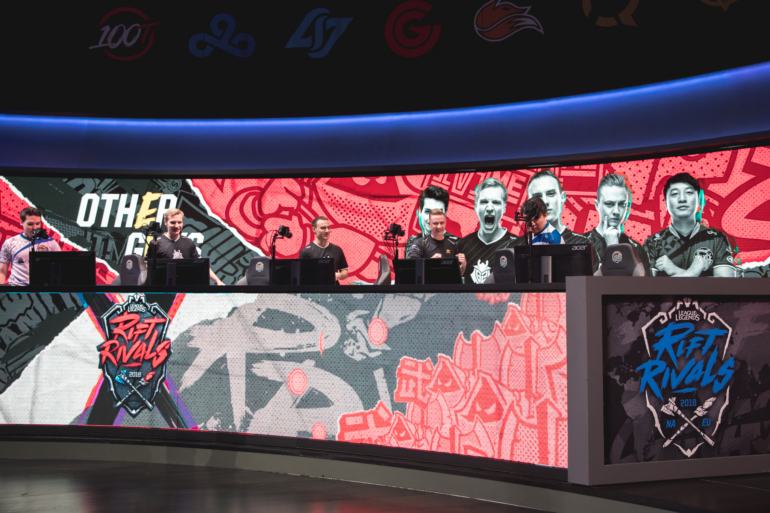 Rift Rivals 2018 is underway at Riot’s LCS Battle Arena in Los Angeles, and it’s already devolved into the fiesta we were all hoping to see. Teams are pulling out unexpected strategies (which are unexpected even for the current meta), some are trying out new players, and every game has been exciting so far.

North America and Europe are tied at 2-2 right now, and a few of the teams ended the day looking much more impressive, or entertaining, than the others. Since this event means nothing for either region in terms of Worlds seeding or anything beyond bragging rights, they’re comfortable in trying all of these new things out, and it’s made for an excellent show so far.

Here are the three most-impressive teams at the event after day one.

Fnatic have been playing with their legendary bot lane carry Martin “Rekkles” Larsson for a few weeks now. At first, it was worrying to think of the reason they subbed him out—he was unable to suit himself to the meta. Sure, it sucks to worry that if the meta doesn’t change to allow traditional marksman champions back into the bot lane soon, that it could be a while before we see him again.

On the other hand, though, Gabriël “Bwipo” Rau has been very fun to watch. Fnatic’s win over Echo Fox today was no exception.

Not only was Bwipo’s performance entertaining to watch, but it was also very fun to see jungler Mads “Broxah” Brock-Pedersen absolutely crush Echo Fox’s iconic top laner, Heo “Huni” Seung-hoon. Huni doesn’t lose outright very often, and he’s definitely not known to usually be a burden to his team. Still, against Fnatic, he was completely exploited. His overly-aggressive playmaking was met at every turn by a gank from Broxah. He was always there to capitalize on Huni blowing his Slice and Dice ability, Renekton’s only form of mobility. At the end of the game, Huni’s score was a rather depressing four kills with six deaths.

Fnatic looked clean, to put it simply. They identified exactly what they needed to do to cripple Echo Fox, one of the favorites in the NA LCS, and they executed it without much of a hitch.

Speaking of clean games, Liquid completely demolished Splyce in almost every aspect of the word. Not only were their proactive decisions, mechanics, and macro play all better, but they also definitely won the draft, too. Splyce decided to attempt to bring Caitlyn back into the meta, but as anyone who’s tried that in solo queue within the past two months can tell you, that’s a bad idea.

Splyce’s bot lane just wasn’t dealing damage when the big, juicy teamfights started exploding around the mid lane. Meanwhile, Yiliang “Doublelift” Peng and Kim “Olleh” Joo-sung were completely annihilating. They were up in farm, kills, and, most importantly, Doublelift was on Kai’Sa.

Liquid systemically racked up thousands and thousands of gold for a lead, and that gap only grew as the game led on. Liquid took tower after tower, and there was nothing Splyce could do to stop them, because they just couldn’t deal any damage. Once Liquid got ahead, they looked like they knew how to close out a game better than anyone else at the tournament—especially when compared to G2.

So, we were careful to mention that some of the teams on this list were more entertaining than others, and that’s why they earned a spot here rather than showing outright power. 100 Thieves are on this list because they were getting hammer-tossed by G2 Esports for almost 30-straight minutes. And even though they ended up losing, their veteran-packed roster made teamfight decisions and map movements in the late-game to hold on.

G2 were obscenely far ahead, and 100T still found picks and outplayed the G2 roster. Đỗ “Levi” Duy Khánh, who’s starting for the 2018 Spring Split NA runners-up during this tournament, stole two Barons from G2. They caught out legendary G2 mid laner Luka “Perkz” Perković not once, twice, thrice, or even four times, but five times after G2 had already amassed a very large lead.

And that, friends, is about as 100 Thieves as you can get. It was everything that they’ve become known for domestically, but amplified to its highest extent to an almost comical degree—weaknesses and all.

Rift Rivals continues tomorrow with the battle between each region’s most recent champions—Fnatic and Liquid.