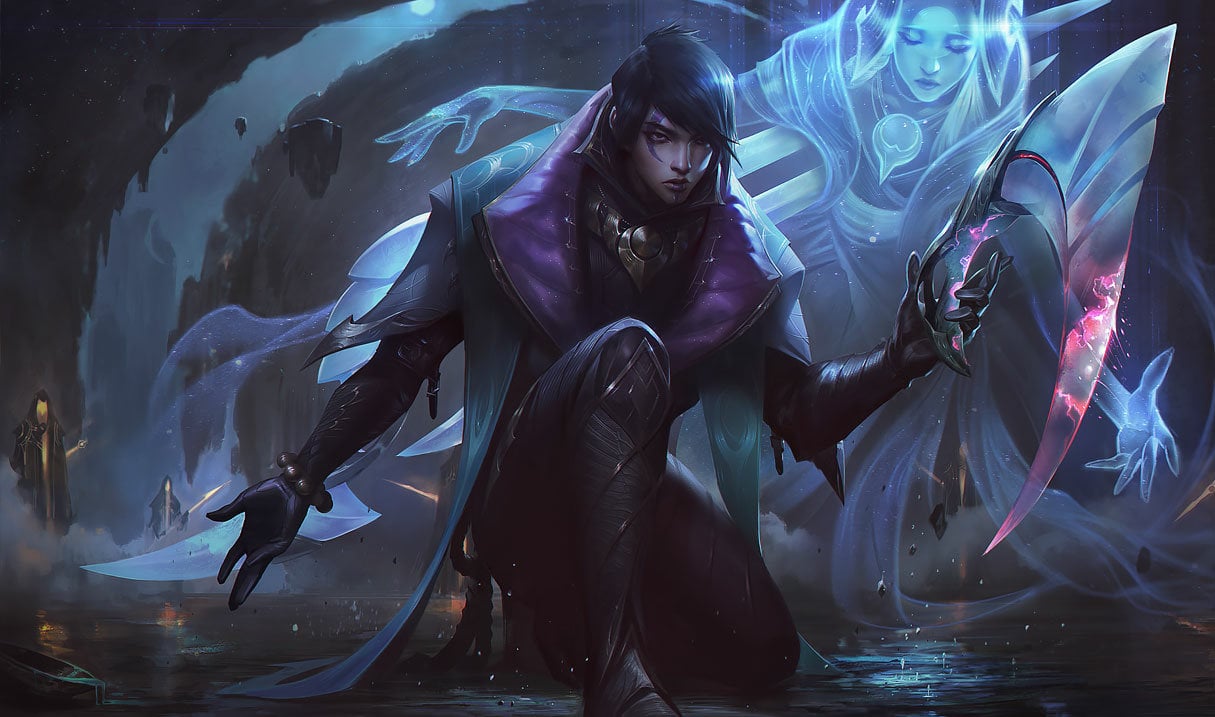 Aphelios, the most popular AD carry champion, has warped the League of Legends meta and made opposing bot laners frustrated with his strength since his release.

The ADC became a major issue in both solo queue and competitive play following his release in December 2019 and popularized the “200 years” meme, which originated from Riot Games champion designer Nathan “Lutzburg” Lutz’s response to a Wukong main.

While there are some planned nerfs on the PBE for League’s Patch 10.15, it’s unclear whether it will keep him in check and stop him from being an instant pickable champion in pro play or solo queue.

The Invoker of League

When Aphelios was first teased by Riot, the community’s interest went through the proverbial roof. How would an Invoker-type champion from Dota 2 translate to League?

In Dota 2, Invoker is a mage who has no basic abilities but can combine elements to create certain abilities, allowing for a clear display of mechanical skill, especially in dire or tense situations.

In theory, adding this mechanic to the game sounded great. But once the champion was released on the PBE and people started testing him out, everyone noticed that the expected skill expression of the champion just wasn’t there.

Aphelios was teased with five weapons that could be switched and controlled by putting one of them in the off-hand slot. The only thing players needed to manage was the number of remaining bullets to be prepared for a teamfight with the most suitable weapon. While his trailer video showcased a situation with multiple weapons, everyone wondered what the differences between weapons were. Aphelios wiped out the enemy team with all weapon combinations in the trailer, showing how insanely strong he was regardless of weapon choice before a teamfight. His enemies were of equal level and items yet dropped like flies to Aphelios’ abilities.

Usually, champions have some sort of weaknesses built into their kit to allow for counterplay. Aphelios has access to a multitude of effects, such as long range, a slow, a root, lifesteal, high melee-range damage, and much more. While it makes each of his guns feel unique, all of these effects made the champion too good at everything.

His power during the laning phase with his lifesteal and long-range weapon needed multiple nerfs before he landed in a counterable state. During the mid game, he kept regularly one-shotting clustered enemies with just his ultimate due to how strong the combination of Infernum with Moonlight Vigil was.

He clearly missed the checkpoint regarding a visible weakness. And even though he lacks a dash, it can’t be considered a weakness when he outdamages you if you get close to him. This power was exemplified by Schalke 04’s ADC Nihat “Innaxe” Aliev during the LEC Summer Split, when the bot laner picked up two kills in a one-vs-four situation and escaped with a full health bar despite being chunked down to near death.

Constant nerfs since his release

Riot released Aphelios overtuned and had some clarity issues, which skyrocketed his win rate to more than 55 percent for an extended period of time. While the developers addressed him in the next patch after his release, he kept overpowering champions who tried to contest him in the bottom lane.

As a result, he kept being nerfed, one part of his kit at a time. The only aspect that went untouched was the Gravitum weapon, which was already subpar compared to his other options. That doesn’t mean that it isn’t strong, though, since players have learned how to use it effectively to escape dire situations with its AoE root.

While champions usually land in a balanced spot after a couple of nerfs, Aphelios didn’t see the same fate. He’s still being contested for a priority pick even after nine nerfs, which should have put him into the ground. The fact that Death’s Dance got reworked to be viable as an ADC item didn’t help the situation as well. Aphelios became even stronger with the new Death’s Dance once again after his multiple nerfs.

Are players just too good at this champion?

While for some champions, mastery can be achieved after a number of games, Aphelios seems to do well in the hands of all players, from noobs to the more-experienced ones. His win rate seemed to hover at more than 50 percent for six months with a huge presence since his release in December 2019.

The difference between a good Aphelios and a bad Aphelios is minuscule; it doesn’t matter what weapon he uses—he can delete entire teams with each setup.

While players who main Aphelios might not be much different from those using the champ for the first time, it’s important to see the context of the impressive one-vs-five plays that some people are pulling off. Most of the time, enemies are grouped closely together and give Aphelios an easy way to access the entire team.

Renowned League coach and caster Nick “LS” De Cesare gave his insight a couple of weeks ago into the Aphelios problem., arguing that instead of adjusting their draft, teams keep drafting melee compositions, which favor Aphelios.

There have been several cases in professional play where opponents have picked a ranged mage, like Syndra or Ziggs, to deal with Aphelios accordingly. But these types of picks require your bot laner to practice them to the highest level before bringing them on stage. The lack of such situations shows that either players aren’t enough investing time into practicing these picks or they can’t seem to play a composition without a traditional ADC.

A lesson for the future

Aphelios is a one-of-a-kind champion and will be remembered on the Rift forever. While he didn’t deliver the expectations players had when they first heard of him, he did overdeliver by popularizing the 200 years meme.

While his kit has been problematic due to lacking clear weaknesses, the constant number of nerfs have toned down his power and he’s more manageable now compared to his release status. The issue with him being so strong is a combination of his kit being too flexible and players refusing to adapt their draft and gameplay when Aphelios is in the game, relying on comfort rather than answers to this pick.

Going forward, Riot should tone down such unique aspects and allow for more counterplay. They could either buff the old-guard champions or undertune new champs so that they don’t influence the meta too heavily.