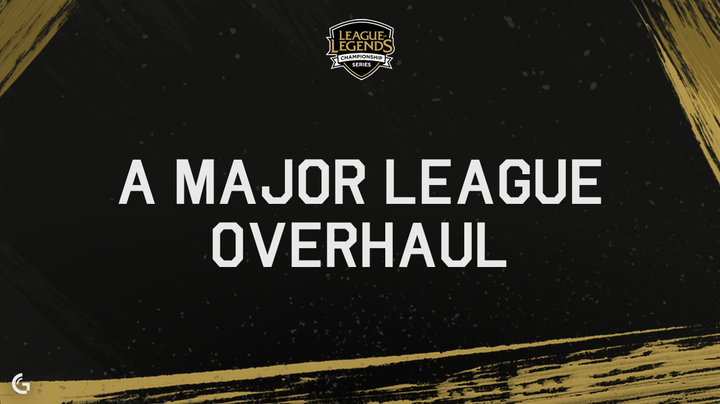 League of Legends is entering the final stages of its sixth season with the World Championship beginning in September. The League system (North American League Championship Series, European League Championship Series, League Champions Korea, etc…) has been integrated into every major region and the consensus from the viewers is that the experience, while still enjoyable, is stagnant. Calls for more international events are entering the discussion as memories of the Mid-Season Invitational are coming back into collective thought. Now, is the time for Riot Games to re-examine its professional circuit and make changes that can meet the needs of not only the viewers, but also the teams and investors.

Riot has always said that its primary goal is competitive integrity, however, they have failed to meet the needs of its casual audience as well as those of the professional scene. This has led to important games played on inopportune patches, most notably the season four World Championship and the current round of playoff games. Teams that qualified on one patch now play important games on a very different patch that change the game to a very different metagame than how they originally qualified. This is not only unfair to the teams, but also unsatisfying to the viewers as teams wax and wane with patches and not their play.

The constant change of patches also leads to a much faster rate of player turnover than is seen in other competitive games. When a patch changes players are forced to adapt quickly or potentially lose their starting spot. While understanding and adapting are important aspects for teams, this does not determine who the best players are, just those who can put the most time into a new patch. Long league splits only further complicate the patch problem.

Long league splits often feel like they don’t matter and can result in declined viewership. Each game in a split should feel like it is important, but when leagues last months, the overall impact of each game matters less. This decline in viewership does nothing to help Riot or teams generate revenue, which has recently been a focus of the community. Finally, the lack of international competitions in the current system has been highlighted as an area that could be improved.

To solve these issues I propose a Major Schedule. This idea was referenced by William “scarra” Li and Michael “Imaqtpie” Santana on Beyond the Rift (ep. 05) and takes ideas discussed on Summoning Insight by Thorin and MonteCristo. The proposal is for one-year long season with three splits that will feed into three majors, which will replace the Mid-Season Invitational and World Championship. The Leagues of the five major regions (North America, Europe, China, Korea, Taiwan) will have a five week regular season into three weeks of playoffs. The top three teams from each major region will attend the major with a single wildcard team. Each major can follow the format of the current World Championship. The pre-season tournament is a less competitive event where the 4-6 seeded teams from the major regions along with one wildcard team are invited to play with the pre-season patch.

The schedule would be as follows:

May: Off-season into Summer Split Major in EU

There are a number of positive attributes this schedule allows. This should reduce player burnout. The schedule It does not intrinsically fix the problem encountered by top tier teams that currently find themselves playing almost year-round, but it does alleviate the problem. Players have at least three months off in the year allowing for rest, relaxation and maybe even a vacation. The pre-season should also allow the mid-tier teams additional opportunities to grow their brand and show off their sponsors.

It also creates shorter splits, which will mean each game has a higher impact as well as reducing the number of drastic patch changes. Higher impact games and more frequent international competitions would increase viewership and assist towards increasing revenue for Riot and teams. The off-months could be used by third parties (such as Intel Extreme Masters) to run tournaments without interrupting league schedules, again giving teams the chance to grow their brand on a domestic and international scale.

This system creates a number of opportunities for Riot. It could create a more stable patch cadance. Riot will have more windows to drop large patches (during off-season) and refine them (during splits). Now, this is not a perfect system, as new champions are introduced far more often than three times a year, but a more regular system will help professional play immensely.

This also gives Riot more options to generate revenue. International events guarantee larger viewership numbers, more than enough for a broadcaster to want to air it. Riot could keep broadcast control of its leagues, but choose to sell the broadcast rights when it knows viewers will be high. This will generate better sponsorship opportunities for top-tier teams and opens up a limited form of revenue sharing for teams. If Riot sells the rights, it could also sell its casting talent providing additional opportunities for casters to make money and grow their personal brand. With an event in NA, EU and Asia it gives more chances for fans to enjoy the game by traveling to an event.

While this system does not fix all of the issues with the current schedule, it does meet many of the demands of the players, developers and spectators. The biggest loss to the scene would most likely be the allure of a World Championship. Without a definitive “World Champion,” some sense of history could be lost. Regardless, with the everchanging nature of the game, a more definitive list of global top-tier teams could be established. A scenario where one team wins all three majors may even hold more allure than a single World Championship. This schedule also has no room for promotion or relegation tournaments, though if a franchise system is put into place this may be a moot point. Most importantly, this schedule creates a more dynamic viewing experience and incentivizes top tier teams placing well by rewarding players and sponsors with more opportunities for growing their brand.

What are your thoughts on the proposed schedule for League? Do you agree with it? Let us know in the comments below and follow us on Twitter – @GAMURScom – for more esports updates and coverage.