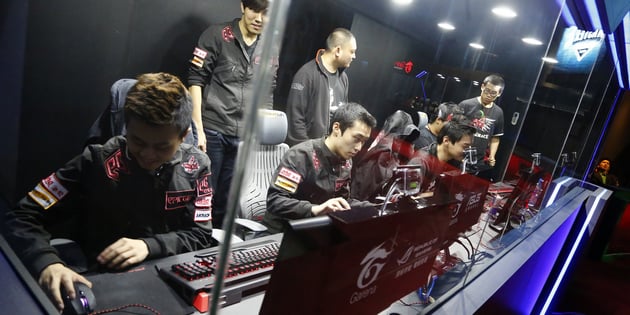 ahq e-Sports Club made a name for itself at MSI, being able to take games off of both Fnatic and Team Solo Mid in the group stage, while also challenging SK Telecom T1 in their final group stage match. While the team may have faltered against their “big brother,” Edward Gaming, in the semifinals, they showed that the LMS is not to be underestimated. Since then, ahq has continued to show their greatest form, dominating the LMS Summer Split.

The team did not drop a single best of two, while only losing three games overall, going 11/0/3 during the season. The team has only improved from its MSI state, showcasing an ability to win games apart from a bot lane snowball by snowballing their star top laner, Ziv. Additionally, Mountain has maintained the excellent form he debuted in spring playoffs, only being rivaled by the Flash Wolves’ jungler, Karsa, for best in the region.

ahq is coming into playoffs the outstanding favorites, only having dropped a game against HKE in the top four. They are also coming off a 2-0 of the Flash Wolves, the team believed by many to be second best within the region. While the early game has presented some problems for the team lately, ahq’s teamfighting ability is still unmatched within the region.

Although the Flash Wolves were strong, they were also notorious for having a weak top laner and AD carry, in Steak and NL. Eventually, the Flash Wolves would make moves to try to shore up these positions. MMD, former mid laner, began splitting time with Steak top lane, playing mostly carry champions such as Rumble. NL, being less valuable as a voice than Steak, has currently been moved to a sub position. In his place, the Flash Wolves brought in Korean import, KKramer. While his champion pool seems thin, his mechanics are up to par with the league’s best.

The Flash Wolves bot lane seems to be on a higher level, while Karsa and Maple still maintain to be some of the strongest players at their respective positions. The Flash Wolves still struggle with aggressive play, having trouble with both HKE and ahq. While they are the second best team to beat, they are susceptible to more upsets in the current meta.

Most know Hong Kong eSports as the return of Toyz and Stanley, including three other older players. The team this split struggled with finding an identity as they incorporated a new Korean import, Raison into the team. Raison impressed early on with his individual mechanics, but the team seemed lost and relied on late game scaling compositions to cover up their clear early and mid game problems.

About halfway through the season, the team developed an identity that featured Raison as the main carry, with Stanley playing more carry style champions such as Fizz and Vladimir. Once the poke meta began to settle in, Toyz found himself performing incredibly well on Jayce and Azir among his regular control mages. The most important part of the team’s turnaround was HKE prioritizing Rek’Sai for Dinter, while he also expanded his champion pool to include Gragas and Evelynn.

The team impressed, being able to split with the likes of ahq and FW. HKE in the latter weeks showed adept side wave control coupled with strong understanding of their pick/ban phase, e.g. prioritizing Sivir and Rek’Sai. Coming into final weeks, I expected them to knock off FW in a Bo5, but with Garena’s one year ban of Raison, this appears to be less likely. The team and notably support player, Olleh, struggled to work with GodJJ in his previous stint on the team. Now that he is coming to replace Raison, HKE will have to fit him into their winning formula.

Midnight Sun has grown from being a relegated rookie team in spring to being the final playoff team in summer. Lilballz’s coaching has done wonders for the young roster as they continue to progress as a playoff contender. The team up until mid season was content with LOFS and Empt2 being the carry duo in most of their games. The original roster had been performing well, but in the middle of the split, roster changes were made. MSE would be importing two former Xenics Modslook players in, Stitch and caNdy, to replace CorGi and the much maligned Wish replacement, M1ssion.

This roster swap was very promising at the time and many considered this the final point of change for a playoff contending MSE. There is no doubt that the players are individually talent and are upgrades over CorGi and M1ssion, who were notoriously weak laners. However, gold allocation has been thrown through a loop and the team struggles with effective map movements and teamfight engages. The MSE roster changes will likely have a larger impact next split than now.

MSE has been unable to truly contest top teams, but looms as a dark horse that can potentially upset either the Flash Wolves or Hong Kong eSports. caNdy and Stitch are talented enough, that if given the gold lead, can carry the game in mid and late game teamfights. However, with the rise of poke champions, the team will still fall victim to their weak side lane control and poor teamfight engages. Their match against HKE is in a little over a week so they still have some time to find a system that works.

Playoffs kick off July 24th with Hong Kong eSports and Midnight Sun as they battle to face the Flash Wolves in the next round. Be sure to tune in at twitch.tv/garenatw!