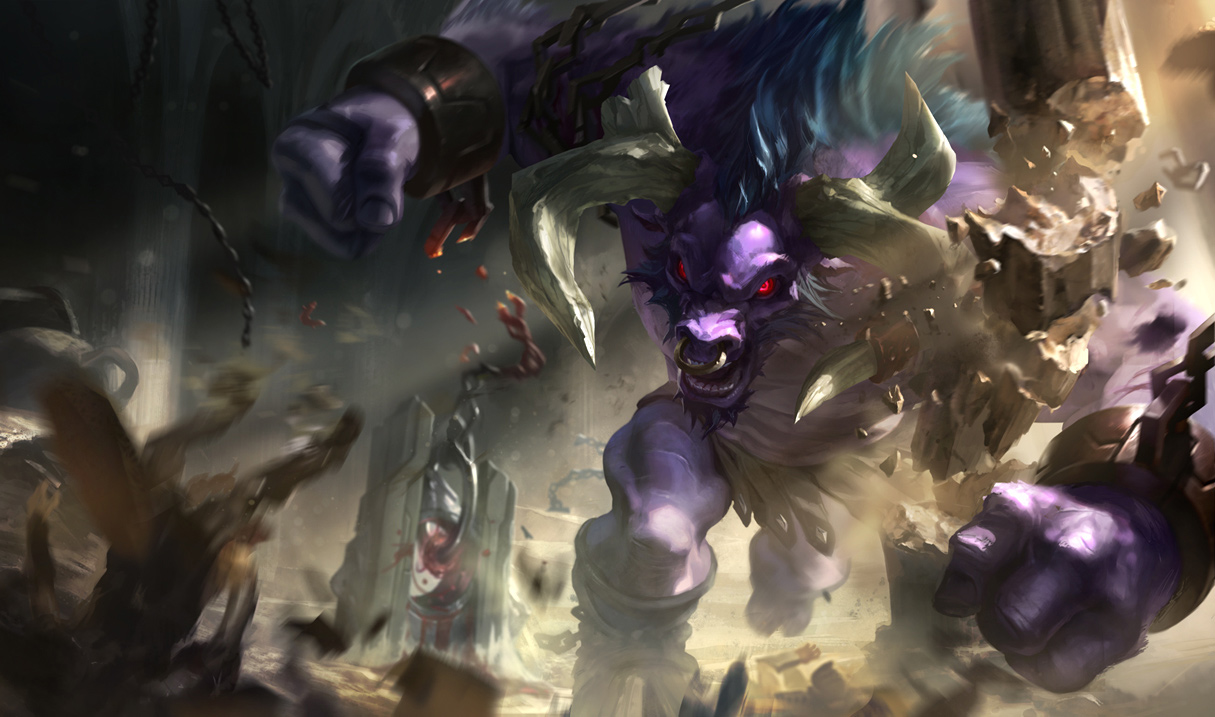 Patch 7.14 will be here tomorrow, and it’s a big one for balance changes, according to the official patch notes.

Between 10 bans, champ select changes, and the honor system in the last few patches, there’s certainly been a lot of new, shiny things in League of Legends.

Related: Right now is the best time ever to play League of Legends

In tomorrow’s patch, Riot is slowing things down and pointing its focus on the broken parts of the game. Long-forgotten top laners, such as Garen and Cho’Gath are being patched up, as well as Diana and a couple of League’s beefiest supports.

Most of Cho’s kit is at least being tweaked, with some mana cost and cooldown changes being dished out to his Feral Scream and Rupture. What really stands out in Cho’s changes, though, is that his E, Vorpal Spikes, is being completely reworked.

Rather than being a toggled ability, it will now be have a cooldown, and instead of affecting every auto attack, it will affect the next three auto attacks after activation. Rather than dealing a small amount of bonus damage with each hit of his Vorpal Spikes, they will now deal a large chunk of the target’s max health in damage. This will allow him to trade damage intelligently in lane, deal with tankier foes in the late game, and jungle more effectively.

Diana is in a rough spot at the moment, because her kit has enough wrong with it to warrant a full champion gameplay update. In the patch notes, Riot says it knows she needs this level of attention, but it doesn’t want to leave her unplayable in the meantime. So she’s getting some big changes this patch as a sort of band-aid until the design team can get around to reworking her.

Her passive’s attack speed boost will now only proc if she casts an ability, and will apply to her next three auto attacks. It starts out at the same boost that it is currently, but the boost is amplified by a lot each time she ranks up her E, all the way up to a whopping 90 percent boost. This means she’ll be an objectively-murdering monster later in the game, but it also sort of locks her into a hybrid attack speed build with Nashor’s Tooth, Lich Bane, and maybe even a Hextech Gunblade. The cooldown on her Q is also being lowered at early levels to help with clearing jungle camps and harassing in lane.

Taric is one of the game’s best support tanks, especially when it comes to teamfighting, and he’s one of the only tanks that can double as an effective healer. Unfortunately, his laning phase is so horrible that no one can justify dealing with that shortcoming to make it to his teamfighting stage. Lots of changes are coming to give him some laning love. No, Ezreal, not that kind of love.

For starters, his mana regen is getting cranked up so he can use his abilities more often without having to worry too much about running out of resources. Each charge of his healing ability will now heal based on Taric’s maximum health, which means his team will benefit a lot more as he gets tankier, and his Bravado-empowered auto attacks will instantly grant him a charge now. The ability has a short cooldown, but with the other buffs, it won’t matter terribly much. His Dazzle is getting a significant damage buff also, which means trading damage will come much easier to the fabulous protector of the world.

“Yay! Singed is getting more annoying,” said no one ever. Well, bad news for all of us that hate playing against him: It’s true. It’s great news for anyone that enjoys playing him, though, because he really does need some changes.

His primary damage ability, Poison Trail, is being buffed to scale with 80 percent of his AP instead of 60, which is a big buff for Singed players that like dealing nauseating amounts of damage to their enemies. AP Singed will no doubt be more effective now. More importantly, though, is the change to his Mega Adhesive, because it now grounds targets. That means no mobility spells or Flash can be used to get out of it now.

His passive is also being replaced completely by Noxious Slipstream, which will grant him a very large boost to movement speed when he gets close to another champion, ally and enemy alike. This will make weaving around enemies to lay poison down much easier, and yes, he’ll be way more annoying.

He hasn’t been spinning to win much of anything lately, so it’s no wonder that he’d be targeted with some buffs, and he’s getting quite a few tomorrow. His passive is getting the biggest change. Rather than being boosted at levels 11 and 16, it’s only going to be boosted once at level 11. This means that it won’t end up quite as powerful at the end of the game, but he’ll be much stronger in the middle of the game, and ultimate comes out to be a large buff. The regeneration also gets cranked up when Garen is low on health, which is a new effect.

His W, Courage, also protects for a lot more right after you activate it, and then it fades down to the standard 30 percent damage reduction, which means it will mean a lot more to use the ability at the right time to block big abilities from hitting him. His spin will also scale higher with AD now, which is a flat damage buff.

There are other changes coming around to the likes of Alistar, Yorick, Rammus, and more. If you’d like to see the full list of changes coming with tomorrow’s patch, be sure to check out the full patch notes.