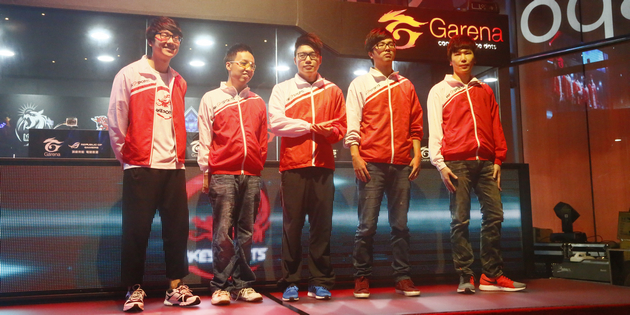 All stats are from Oracle’s Elixir! All photos from lms.garena.tw!

HKE looked to be the second best team in Taiwan by the end of spring split, but were unfortunately stomped out during ahq’s gauntlet run. Coming into the next split, they had replaced GodJJ, citing issues between him and HKE support, Olleh. As the Summer Split began, HKE seemingly had issues working with new Korean AD, Raison. While bottom lane had an easier go of it, speaking the same language, team communication hit rock bottom.

They would struggle for the first few weeks, struggling to find an identity and an efficient early game plan. They compensated for this and continually fielded scaling, bruiser filled comps, in hopes of getting to late game and winning off of teamfighting. Dinter, based on his history, seemed suited for the cinderhulk meta, but struggled to adjust to the new pool of junglers.

However, in the latter weeks, HKE found an identity and Dinter found his footing in the cinderhulk meta. HKE moved away from tanks top lane, prioritizing Fizz for the rest of the split, while Toyz settled into a comfortable champion pool of Viktor, Azir, and Jayce. After HKE hired a coach the rotations, objective control, and side wave control were obviously improved, as they played very well against ahq and the Flash Wolves, in the closing weeks.

HKE, once again, looked to be the second best team in Taiwan, but uncertainty struck as Raison was struck with a one year competitive ban for elo boosting (that has since been revised to be nine months). The team confirmed that they would be using GodJJ for the remaining regular season games and playoffs. Prior to playoffs, HKE would also acquire Korean top laner, May, who would play an integral part of HKE’s strong playoff run and contestation of ahq in the finals.

May is a bit of a journeyman, having come third in the first season of Champions with Xenics Storm, changing over to Team OP, serving his two year military duty, coming back to Korean challenger with Jin Air, and eventually making his way to Hong Kong Esports for playoffs. While the general sentiment has been that he was a poor top laner in Korea, he had a strong showing for HKE in playoffs. He nailed his teleports, provided good teamfight presence, and brought forth both strong tank and carry play.

May sported a similar champion pool to Stanley, playing primarily Rumble, Maokai, and Fizz. However, not only does May play a Rumble that Stanley doesn’t have at his disposal, he plays Maokai and Fizz considerably better. He’s the same kind of player as Stanley, one who wishes to put pressure on the backline, in favour of peeling, but showed to be more efficient on the style. Another clear improvement was HKE’s playing around teleport, which is safe to assume is centered around May and Olleh both speaking Korean.

Dinter’s history is one of mediocrity and being remembered as the worst player to ever be on the Taipei Assassins. However, after initially struggling in the cinderhulk meta, rose quickly as a competent jungler in the LMS. HKE’s reprioritization of Rek’Sai and Dinter’s expansion of his overall champion pool set him on a course for redemption, and being the most improved player this split.

Dinter is a simple type of jungler, one who goes for a full clear just about every time and attempts to finish his jungle item as fast as possible, often forgoing wards in favour of building stats. While Dinter’s early game vision  isn’t particularly strong, he makes up for this with his constant scuttle crab control and forays into the enemy jungle, having a generally good sense of where the enemy is.

It’s clear at this point that Dinter studied his own jungle pathing and likely, Mountain’s jungle pathing, as much of his gank pathing emulates his. He has succeeded consistently in recent times with his newfound understanding of ganking and contributes to a routinely strong HKE early game. HKE lives and dies by Dinter’s performance.

Toyz is likely the most well known player in the LMS, due to his triumph of the Season 2 World Championship, along with the rest of TPA. Toyz for Spring Split and most of Summer appeared to still be a top mid laner in the LMS, but without much impact on his team’s wins or losses. Toward the end of Summer and during playoffs, Toyz leveled up and became the main carry for HKE, outperforming the likes of caNdy and Maple on their way to the playoff finals.

Toyz is still very much the same player, favoring the mage over the assassin, which pays dividends in a meta where Azir and Viktor are so prominent. Toyz is consistently ahead in the laning phase, often being pushed up in the lane, allowing Dinter to maneuver around the opposing jungler. Toyz’s teamfighting, has been very good all season, excelling in target selection and staying safe in teamfights.

GodJJ is a long time member of the Taiwanese scene, having been a sub for TPA and eventual starter for TPS. GodJJ was a serviceable AD in his time in the spring, being able to survive in the laning phase while Olleh roamed around the map and made plays for HKE. His performance in the series against MSE at the end of regular season was concerning, but quickly shook the rust off as he performed as GodJJ should in the playoffs, averagely, as Toyz and May were primary sources of damage.

GodJJ isn’t main carry type of material, he is a safe AD that will output respectable damage in teamfights, with good positioning. Due to this playstyle, you see a large Sivir priority on HKE, where he plays a huge part by simply using his ultimate. He seems more comfortable in this role, as opposed to being the secondary carry in Spring.

Olleh has played competitive League of Legends in three different regions, Korea, Brazil, and now Taiwan, bringing in a new flavor to everywhere he visits. In the LMS, he is primarily known as a wonderful roaming support and has gained much recognition from the fans for this. In the Spring Split, he was basically the sole source of HKE’s playmaking and still retains a very important role in that matter, in the current day.

Olleh is no longer pulling all the playmaking weight on HKE anymore, with May in the top lane and Dinter improving over the course of the split. He no works very well with Dinter in creating optimal engages and stunning ganks in the bottom lane. It also seems that he is a key factor to HKE’s teleport play, as he can communicate with May effectively. Additionally, Olleh’s roam capabilities have only been accentuated by Dinter’s policing of the enemy jungle.

Olleh, during the regular split, covered a lot of HKE’s warding game. His vision game is key to HKE’s ability to choke enemy teams out of the early game, after knocking down T1 towers and establishing dragon control. Olleh’s vision game and engage tandem with Dinter has been snowballing games for HKE like no tomorrow.

HKE are convincingly the second best team in Taiwan, at the current time. They play a strong early game, have a strong concept of snowballing leads, and bring better teamfighting than any team not named ahq. Having top three players at three positions also helps, as they have quite a bit of talent over other teams in regionals. This is especially true against TPA, as they are running Yue and Morning, respectively, in Top and Mid.

HKE, after weeks of losing early game after early game, have secured the second best early game in the league. Dinter’s renaissance, combined with May’s and Toyz’s strong laning has made for easy gold leads coming into the mid game. While HKE tends to farm rather safely for the first ten minutes, with Dinter and Olleh ganks in between, the team turns it on come mid game.

However, HKE has shown some issues in lane swaps, being unable to tower dive effectively on more than a few occasions, but tends to come out on top anyways, in terms of experience and CS. ahq, however, crushed them in this aspect, solidifying large early game leads against HKE. The Flash Wolves, on the other hand, only beat them out in the laneswap once, where HKE still recovered.

HKE also has trouble with priority warding, having more than a few barons snuck against them, after deep tower sieges. In general though, they maintain a good handle on vision and often leverage well against their enemies, catching them out in their own jungle and pushing their lead. HKE’s ability to engage on the backs of Dinter, Olleh, and May have allowed for the team to close out the majority of their mid game leads, a problem that has plagued teams like MSE and the Flash Wolves.

HKE’s teamfighting has been stellar, being able to close out games, or even claw back from early game deficits. However, the fatal flaw of HKE comes from this hubris, as they tend to overcommit on more than a few engages. Sometimes it works out, sometimes they have several members die under the enemy T2. Especially against ahq, this complicated some leads and led to defeats. TPA isn’t strong enough to punish this kind of mistake, but MSE or the Flash Wolves can likely take it home, given the context of the game.

Despite a tendency to dive a little too hard, it often does not end badly for the tean. They are still ahead of the other regional teams in multiple aspects of the game, perhaps only being inferior to Flash Wolves, when it comes to early game vision control. HKE should have no qualms with TPA, as they play without their star player, Chawy. Additionally, regardless if they play MSE or FW, they will be rather favoured, due to their recent playoff run. HKE looks to be the favorite to win regionals and the second Taiwanese seed to the 2015 Season World Championship.