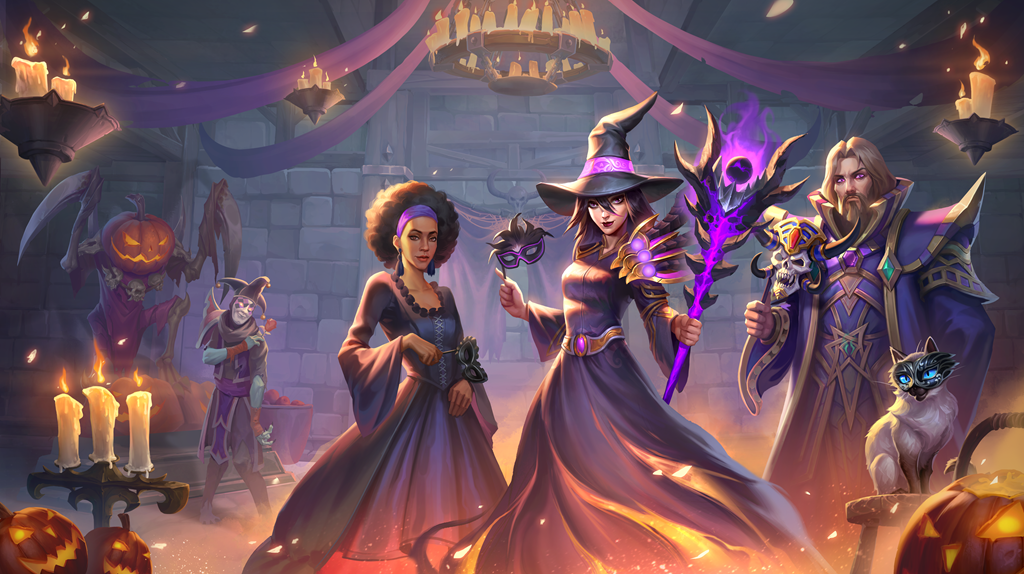 This week, players got a taste of Hearthstone’s new Hallow’s End themed event, The Masquerade Ball.

Coming on the heels of the Scholomance Academy Forbidden Library event, The Masquerade Ball follows a similar timeline and content release cycle.

Week one, which kicked off on Tuesday, Sept. 29, contains three key features. Starting with the launch of week one, players will be able to use Elementals in Hearthstone Battlegrounds. There will be 16 playable Elemental minions joining Battlegrounds, as well as four new Elemental Heroes: Chenvaala, Rakanishu, Al’Akir, and Ragnaros.

Starting Wednesday, Sept. 30, players will be able to partake in the Rise of the Zombeasts Tavern Brawl. This special Hallow’s End themed Brawl allows players to create an undead army by acting as Deathstalker Rexxar and using a discounted version of his Build-A-Beast Hero Power.

Week two of the Masquerade Ball event will see the continuation of Dual-Class Arenas, as well as the introduction of another Hallow’s End themed Tavern Brawl.

Starting Wednesday, Oct. 7, players will be able to dive into the Masquerade Ball Tavern Brawl. This Brawl is meant to create the sensation that everyone in attendance is wearing a costume. When you play a minion, it will transform into a minion that costs two more mana. When that minion dies, the original minion is revealed and joins the fight.

Week three of the event kicks off on Oct. 13 with the introduction of the Rexxar chapter to Hearthstone’s Book of Heroes. Players will be able to play through an eight boss linear adventure that tells the story of everyone’s favorite Hunter. Completing the chapter will reward one Hunter card pack that contains only Hunter cards from Standard.

On Oct. 14, players will be able to take on the role of a Boss in the Boss Battle Royale 3 Tavern Brawl. In this Brawl, players will be able to play as one of 10 unique Heroes. Players can take on the role of Dr. Boom, Sharaz, White King, Cenarius, Baduu Prime, Kriziki the Winged, Lich Baz’hial, Rotwing, Hagatha the Vengeful, and Illidan Stormrage.

The Dual-Class Arena mode will persist throughout week three.

When does it end?

Each week, starting Sept. 29, players will receive a new Legendary Quest. Completing one of these quests will net you three card packs, all of which include cards playable in Standard. The second quest will be unlocked on Oct. 6, with the final one coming on Oct. 13.

Since the final Tavern Brawl associated with the event debuts on Oct. 14, a day after its final quest, you could call the official end date of the Masquerade Ball Oct. 21. This is the day the Boss Battle Royale 3 Brawl will be replaced in the Tavern.

That being said, Hallow’s End persists through Halloween in the Warcraft universe and no Hallow’s End event has completely ended before Oct. 30 in Hearthstone’s past. This means the Hallow’s End themed Dual-Class Arena associated with the Masquerade Ball may persist after most of the festivities have ended.