Hi everyone. I’m TrainerDusk and today I am going to teach you about botting in Hearthstone. I’ve researched how bots work in this game and I have a pretty good grasp on how they think and act. Luckily for you, the bots out there have a weakness. By the end of this article, you should be able to identify when someone is a bot and know how to exploit this for your own personal gain. Let’s get started!

How to identify bots on the ladder.

Although the bots in Hearthstone are constantly being tweaked and updated, there are some telltale signs to look out for.

The red targeting arrow that shows your opponents moves will likely not be there. If your opponent seems to be lacking these targeting arrows, then they are either botting or using the iPad client of the game. The latest versions of the bots have a “Humanity Mode” that try to simulate human behavior and show these targeting arrows. The issue that they have is they cannot drag the cursor across the screen, so the red arrow will appear instantly on the target, rather than moving slowly over the board like a human choosing a target.

No emotes. Botters in hearthstone rarely (if ever) program their bot to use emotes while they are playing. I haven’t actually come across a program with this option. If your opponent seems lifeless and emotionless, they very well might be.

If you are in a game where your opponents actions seem robotic and their targeting arrows are bugged out or non-existent, you are probably facing a bot.

How to exploit the bot AI.

There are a few common styles of play that a bot will use. Once you identify the style of play, you can predict the opponents play, then play around it. Aside from getting a strong opener against a bot, you need to be able to exploit their playstyle to get the win.

The board controller. Board control is the most common setting, as it is the default setting on the popular bots. These bots will try to clear every single one of your minions whilst increasing their board strength through favourable trades. Once they hit a certain threshold (usually when your health hits 15), they will ignore the board state and use everything they have on your face to go for the kill. These bots most commonly play Zoo Warlock or Sea Giant Shaman. You beat these bots with area of effect (AoE) board clear spells. The majority of these bots do not take any AoE spells into consideration when they make trades, so you can often find yourself getting upwards of 4-for-1 trades with decent AoE spells. Grab an extra

flamestrike and you will find these bots much easier to deal with. The face rusher. Some botters have had success by giving their bots very aggressive decks (such as face hunter) and attacking face every turn with everything they have. These bots usually let you build up a decent board presence through favourable trades and hope to kill you before you can stabilize. Your goal against one of these bots should be to keep your health total as high as possible while building a decent board of your own. Anti-aggro priest and control warrior will find these matchups the easiest, as they have considerable amounts of self-heal. Minions such as

earthen-ring-farseer are good sideboard choices if you are facing a lot of this type of bots.

The auto-conceder. Some players use bots to farm up golden heroes. To do this, they will leave the bot running until they have won some matches and are around rank 10-15 then concede repeatedly to drop their rank to 20. The bots have a higher win rate against worse opponents, so by doing this they aim to get 500 ranked wins with a class rather quickly. If you come up against this bot, enjoy your free star and continue onwards and upwards on the ladder.

There are certainly other styles of play used by bots, but the vast majority use either simple board control or face rushing strategies. Bots seemingly never use combo decks and a lot of them struggle to play Druid cards with multiple effects, such as

Try not to get frustrated if you are losing to bots in Hearthstone. After all, you are playing a game to have fun, so take each loss as a opportunity to learn and improve. You shouldn’t expect to win every game you play, so don’t take it to heart if you lose to a bot.

Take your time each turn. You are playing against a program that calculates each possible move before playing their cards and chooses what it sees as the optimal play. You should aim to do the same.

Think ahead a few turns. Most bots do not take into consideration hard removal spells or AoE spells. They will not try to bait out the enemy

hex before playing their

ragnaros-the-firelord, but you can. The AI right now is really quite simple and bots that plan out multiple turns are still in their infancy. 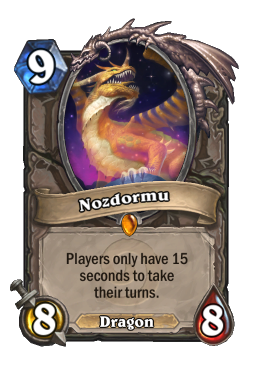 nozdormu absolutely destroys the bots that have a 2 second delay between each action. Try it out.

I hope this brief PSA helps you understand the way bots think and act. The software and algorithms behind bots are constantly being updated, so I wont be surprised when bots start to think ahead or play around certain spells. Hopefully by then Blizzard will have countermeasures in place.

If you have any questions or comments, please leave them below and I will get back to you. You can also reach me on my twitter @TrainerDusk or in-game on the EU server as TrainerDusk#2126.

Thanks for reading and as always have fun!