And we finally move on to the last of the Gangs of Gadgetzan, the Jade Lotus!

The Jade Lotus is a gang that is themed around summoning Jade Golems, tokens that get buffed the more you summon them – For example, if you summon the first golem, it will be a 1/1, then the second will be a 2/2, then the third a 3/3 and so onwards until something around 25/25.

There has been quite a few cards revealed so far and I wanted to discuss some of them, because as you are about to notice there are a few of those cards that have the potential for some very powerful value, that could even break the game.

Because of this, I will try to get myself a little deeper in this review, explaining a little more my thoughts, let’s begin!

So we are going to start this review with the last Kabal card that was spoiled last week.

This little dude seems like an ok-ish Aggro card that should be played as an Anti-aggro card, in case it could work as a decent filler for Dragon Priests in case the 2-drop slot becomes more needy.

Overall I believe this card is bad, because a 2/3 with no effect on a deck that doesn’t aim to “Aggro” in most games feels like a waste, especially because playing him on decks like Dragon Priest, where he is supposed to do some good, would actually hurt your gameplay because you would be aiming at spending your mana instead of curving into higher minions.

So this is somewhat a try at making a non-oppressive

loatheb effect to the point that it punishes opponents for running Spell-heavy decks, but can only be played if you are playing a Spell heavy deck yourself.

All in all this card could show itself to be a particular good tech if decks like Token Druid and most Control decks would become a thing in the game, as it would actually feed Druids or Rogues with Coins to take multiple advantage of Spell-affinity effects such as

The stats distribution seems to be quite strong, as 4/6 is likely the best you could get out of the bunch, and the ability seems good enough that if the metagame calls for it, you are highly likely to want to play this card in your deck, even if just as a 1-of.

Alright so we finally, officially, get into the Jade Lotus Gang review!

We start the review with Jade Spirit, a 2/3 with a battlecry that summons a Jade Golem.

This card was likely analyzed before by a lot of players, and probably deemed good by most, but I will keep it simple: it isn’t.

Even if you manage to make a Jade Golem deck, you wouldn’t always be summoning a 4/4+ Jade Golem, which is when the effect starts to be over-the-top. At 3/3, this minion’s Battlecry seems to pay up in value for a 4-drop, but “paying up” isn’t usually what you look for in your Hearthstone cards, as usually being “fair” will do nothing but get you to lose the game.

Jade Spirit seems like a fair card, the effect should be invested into, and only then you’d get a good effect, and if you invest a lot, you get a very good effect – Your opponent’s won’t allow you to do this. Even your Control opponent’s won’t care very much about it either because of sweepers and Tempo, as this card (even when it actually gets its battlecry to work) seems to me to not be a great one. 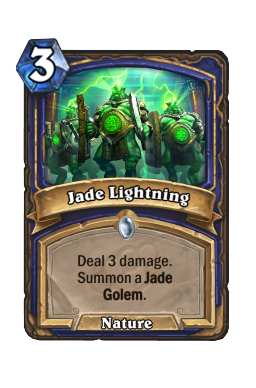 Paying up to four mana to remove a small minion doesn’t seem to be something that you’d want as a Shaman, especially because you have

hex which is basically the best removal in the entire game, a mana earlier and a lot less conditional.

This card is bad, and I suspect Blizzard won’t give Shamans much love this expansion as the hate for the class grew out of Control after Karazhan.

Just remember, however, that having such bad cards added to the class won’t hurt Shamans very much as the current power level of the class as a whole is simply much higher than all the other eight classes in the game.

And we finally start getting into the actual potentially playable Lotus cards.

Aya Blackpaw, or the Jade Lotus gang leader, has both Battlecry and Deathrattle effects that summon Jade Golems, meaning she gets to buff her own Deathrattle Golem, at the same time she is indeed a Persistent minion that works as both “1-card board presence” as well as a sweeper insurance.

Despite having terrible stats for its cost, Blackpaw’s abilities actually make up for it in the utility she provides, which should be more than enough reason to want to run her in your deck.

Beware, however, that she won’t be an auto-include in every deck, as you actually require a couple of extra Jade Golem cards in your deck in order to make her viable enough.

I am still trying to calculate the ideal number of viable Jade Golem cards we would need in order to have Aya be viable (because there are a few Jade Golem cards that are viable by themselves), and I am starting to believe that the number should be around 6+Aya – Druid seems to be very close to that number, let’s keep an eye out for the next reviewed cards. 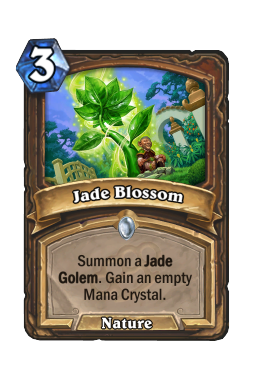 jade-blossom is a spell that summon minions and Ramps up.

The simple fact this is a spell that summons minions already makes this card something Druids want – Today’s most viable Druid decks plays around casting spells to generate a lot of value out of them, to Ramp, and to populate the board in the process. This card actually fits perfectly in every single description so far, which makes it a potential candidate as a viable card in the near future.

I got the suggestions that this card, by the fact it ramps at three, might be unplayable because you usually is ramping at two, but keep in mind you are not always ramping at two and this could be a potential consistency-add. This also gives you Excess Mana (cycles itself) at 10 mana while still giving you a free golem, which should be more than enough reason to get so hyped about it.

Jade Idol kind of makes the whole Druid Jade deal a thing. Token Druid is an already viable deck without the new additions that come with MSG, and was actually going to heavily miss cards like

living-roots in the next year’s rotation. Jade Idol combined with 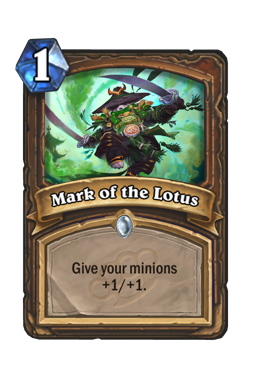 mark-of-the-lotus kind of already fixes Spell/Token Druid problems without even the need of a new expansion giving new cards to the deck next year, which is amazing.

Now, to the card itself, it feels like a worse version of

living-roots because it is not as flexible, but Jade Idol actually has many cool interactions, both with the Jade Golem mechanism, which can end up summoning a 5/5 or bigger minion for the cheap cost of only one mana, and with

fandral-staghelm which should fill your deck with awesome late game token generating spells that would only cost you one mana as well.

The card is also very flexible on the matter that it greatly helps you against Mill decks, without actually having to be an anti-mill tech card.

First, it is a persistent Deathrattle minion, meaning it gives you some amazing sweeper insurance.

Second, the minion it summons is actually a self-buffing Jade Golem, that gets bigger the more golems you summon.

Third it has Stealth which means you can save it up, without attacking, as a sweeper insurance against Control, you can buff it up with a few buffs you could have, and it also guarantees you’ll be getting a Deathrattle for you to copy with your

All these things makes me believe this card is a true bomb that should make Raptor Rogue a, finally, viable deck in the coming months. The fact it has a Deathrattle with persistent effect already brings

nzoth-the-corruptor based rogues a lot higher in the tier, then the minion it summons is actually a Jade Golem which just leads me crazy with the power level that this card can achieve – The fact you can just continuously get bonified by this card’s Deathrattle is amazing, as you can copy it, resummon it and do a lot of other crazy shenanigans. 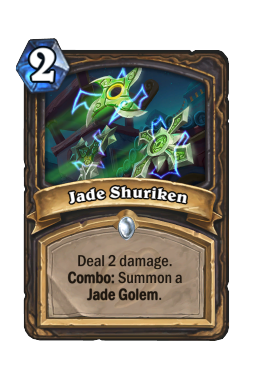 jade-shuriken has a cool effect that adds value to 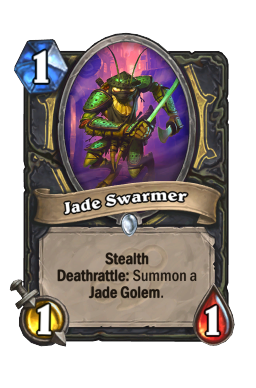 jade-swarmer’s addition to the Deathrattle Rogue deck, because of it, I see no reason for this card not to see play in Deathrattle Rogue decks. However, I am quite unsure of this card’s utility in other Rogue decks such as Miracle and some possible Control-ish Rogue decks as it seems to be a “fair” card in most cases which, as said multiple times before, doesn’t seem to get the job done in Hearthstone’s competitive scene.

The thing that came to mind when I saw this card was its interaction with Rogue spell-heavy decks, as it actually summons a minion. However, the fact you don’t want to have many Jade Golem cards in your Spell-heavy Rogue deck makes this card pretty bad in those decks, which is the reason why I believe this could not see play. In case two other actual potent Jade Golem spells (and not simple “fair” spells like this one) show up, however, I believe this card could be a playable one.

Cards that Don’t Need Much Talking 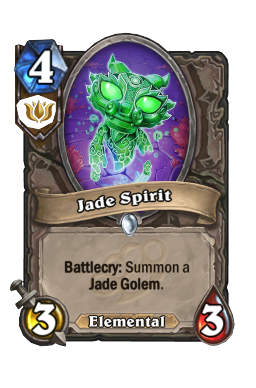 jade-spirit could become a viable option in the end, but as it stands (and as Blizzard usually likes to get things done) we probably won’t see many potent Jade Golem cards as a few of the cards we deemed good so far in the Gang.

The next spoiled cards this week shall be able to point us to the direction we should take our Jade Golem decks, but so far I believe Druids are on a pretty good spot and should only get better, in the other hand Shamans just seem to have gained nothing from this expansion.

I hope you guys enjoyed this article, and we’ll be seeing each other again very soon in our next review!