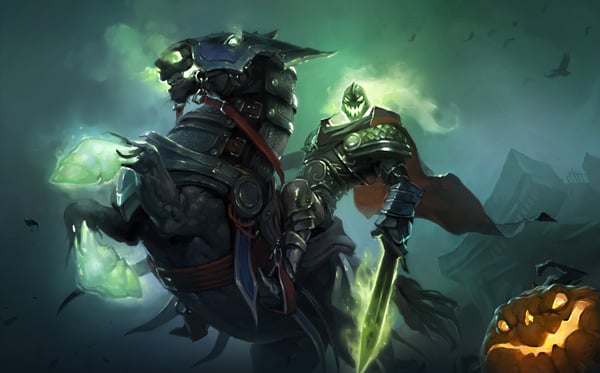 The Hallow’s End event is scheduled to get underway next Tuesday, and will run until Nov. 6.

The event brings a whole host of goodies to the game, including some new sounds and visual elements into the game. The Mage hero Jaina has had some visual additions, and each hero has an event-specific greeting line.

The event will also bring some more free stuff for players—and who doesn’t love free stuff? Logging in once in each seven-day period of the event will award players a free pack, one from Whispers of the Old Gods and one from Knights of the Frozen Throne. Alongside the card packs, players will get a free Arena ticket too.

Those Arena tickets can be put to good use. During the event, the Arena mode will be transformed into a new dual-class format. After you pick your hero, players can then draft a hero power independent of that class. Choices will then appear from both classes, creating a unique deck.

Finally, the Tavern Brawl for the event period will tie in with the theme. From the sounds of things, it’s pretty unlike anything we’ve seen before as well.

“You’ll go in disguise to catch the fiend by surprise—after the Brawl begins, you’ll get to Discover which costume you’ll wear.” The announcement says. “Each costume has its own deck featuring cards from several classes and, for the first time, a passive Hero Power that you’ll need to make the most of if you want to succeed at sinking the sinister specter!”