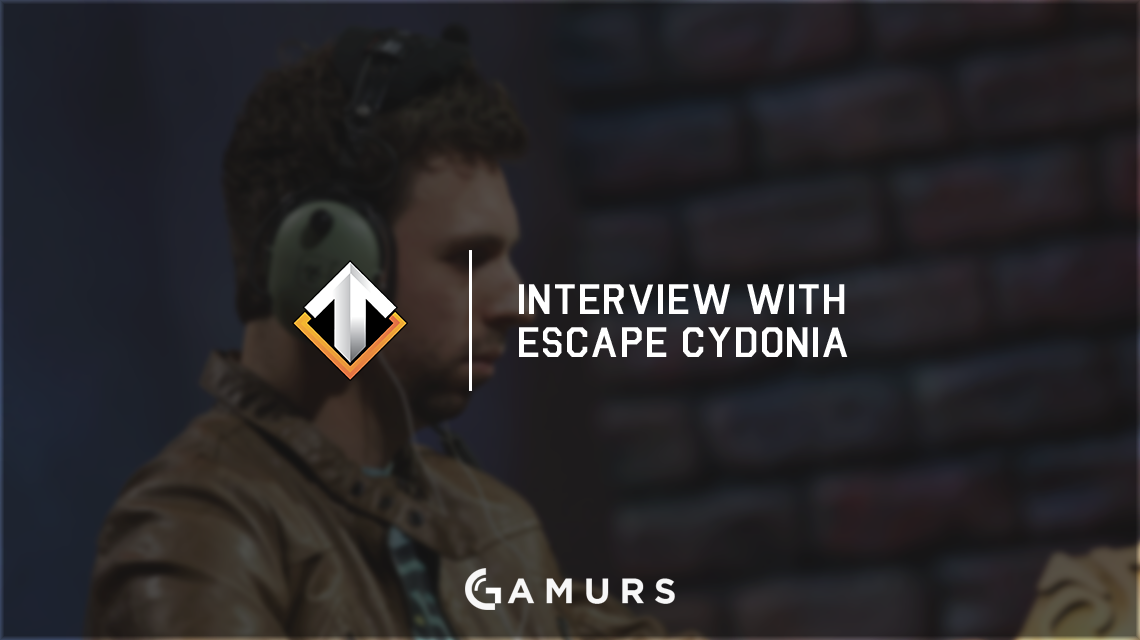 We sat down with Julien “Cydonia” Perrault, thecurrent North American Spring Champion for 2016. We talked abouteverything and got to know more about the “robot” of theHearthstone scene.

So we have a small introduction about you, but could youtell me a bit about yourself?

Cydonia: I really like playing strategy gamesmostly, and for Hearthstone, I was really being competitive andthis is the part I like most about the game; all the competitivemindset and all of that. It’s something I think I apply a lotin different aspects of my life. But I also do a lot of sportsbesides Hearthstone and I work in healthcare.

That’s awesome. You are also a robot, from whatI’ve heard from the community, right?

Cydonia: Yeah, definitely! I notice a lot ofpeople get really emotional when they play Hearthstone and theymake faces and really react with the game. I am really used toplaying card games, where I am face-to-face with my opponent, likepoker, and you can’t really show your emotions too much. Youropponent will probably take advantage of it, so I’m justreally used to that.

Even when I played at the HCT Championship, we were face-to-facewith our opponents, so it’s good not to show too much whenyou draw a card or anything. Even when I play on-stream and I knowno one’s watching me, I react the same way because I think ithelps me focus not being too emotional. Still, I am a robot butpeople are having fun, calling me that.

So does your BattleTag have any special meaning orsignificance? How did you come up with it?

Cydonia: Yeah, there’s a song I reallylike, by Muse, it’s called Knights of Cydonia. A long timeago, I started making characters in games calling them Cydonia andthen I just kept it. I really like the name.

So, how did you pick up Hearthstone? What do you likemost about it?

Cydonia: I just started playing for fun becausesome of my friends were playing as well and they thought I wouldlike the game. The reason I kept playing for so long is becauseit’s a game where when you start it’s pretty easy toplay and understand the mechanics but then you start seeing a lotof strategy. That’s why I played it for so long, jumping tosome new strategy, then noticing more things about the game. And Ithink that’s really interesting.

How do you approach each season and what strategies doyou use to climb your way to the top of the rankings, get Legend,etc.?

Cydonia: The way I approach it right now, I amnot really trying to get Legend. I mostly try to learn all thedecks that are good competitively. So if I see some people havingsuccess with a deck that I don’t know very well, I will trythat deck for a bit, to make sure I learn all the decks that arerelevant, because it’s really helpful to play against decksyou have some experience with, to have a better idea of the gameplan and how to counter it. So, I play many different decks, tryingto learn them.

Of course if I start doing well with one deck, I will sit withit for longer. But, since there’s a big focus on tournamentsright now and you need to bring four or five decks every time, youreally need to know many decks to be successful in Hearthstone.During the last two days of the season, when you want to have ahigh ranking for points, it becomes worth it to do so if you canget a read on the meta-game and try to counter it. But usually,during the month, I don’t play that much during the wholeday, I’ll play for one or two hours and it’s not enoughto really figure out what the meta-game is because it changes soquickly. I think the best approach is to try to just get better atthe game and learn many decks.

What style of decks do you prefer playing? Do you enjoythe current meta?

Cydonia: I really like tempo decks or like,mid-range decks, like the mid-range Druid we had last season andtempo Mage decks. Decks like that are really fun to play for me.I’m not really sure I enjoy the current meta because I feelit hasn’t changed significantly in a long time. But there areall these cards that are really RNG-based like Yogg and Barnes,even other cards which are not that bad compared to the other two.But there are the games you lose to Barnes because he got the rightcard. Or to Yogg, it’s a bit disappointing as it feels thatwhatever you do doesn’t matter.

So I think I really enjoyed the meta better like it was lastyear, for example. Even though people were saying Druid was toostrong with Force of Nature combo, but there were still a lot ofdecks that would counter Druid really well. And it wasn’t 30%or 50% of the meta. Right now, it’s difficult to counter anydeck because they can play some cards that are way too powerfulwhen arranged properly. So I feel like skill matters a bitless.

Do you think this will change when all of the Karazhancards are released?

Cydonia: It would change, maybe, if they make abig expansion later this year with different types of cards. Thenit could change. I’m not too sure if it can changesignificantly without rotating some cards or changing the classicset, like some people suggested. It was obviously a really bigchange when Standard came out and that again was really fun whenpeople were trying to learn the decks. But right now, the meta hasbeen really set in stone, and it’s not that interesting. Ithink it needs a good shake-up soon.

You are in charge of making some changes in Hearthstone.What would you change?

Cydonia: Maybe make more cards that havesynergy together. For example, I thought the mech decks were prettyinteresting because you could use a bunch of mech cards which werenot that strong individually, but were good in a synergy deck.Right now, it feels like most decks are just using really strongcards. Well, of course, if you have a Yogg deck, you would put morespells, but I’d like to reward deckbuilding a little bit moreand have more variety of cards that would be good in differentdecks.

The only thing I would change is about the tournament format. Itwould be better if there were, maybe, longer tournaments, likeSwiss with ten rounds or something, instead of re-using theelimination format. The HCT is double-elimination, but if you losein the first round, you need to win twice the amount afterwards. Somaybe Swiss would be better. I would like it, and a lot ofcompetitive players as well, if the game rewarded skill more sothat you have an incentive to try to practice and get better,because right now it doesn’t really feel like that way.

After winning the 2016 America’s SpringChampionship, you instantly became one of the more well-knownplayers in the scene. How did that seem to you? Do you enjoy beinga champion? Did you have many team offers? How was the overallexperience?

Cydonia: It was really fun. I was reallyfocused on the tournament and on winning it, so I didn’treally think about what happens afterwards. I got a lot of messagesfrom people who watched the tournament and enjoyed it andcongratulated me. There were also teams who contacted me with goodoffers, so it was overall a really positive experience. It made itpossible for me to continue investing time in Hearthstone,especially since I am going to BlizzCon, which is a really bigtournament. So I really want to make sure I stay good at the gameso I can perform well there and afterwards I am going to really seeif I want to keep playing as much and see what’s going on.But right now, it’s pretty much fun.

Speaking of that, what are your goals on Hearthstonethis year and maybe the first ones of the upcomingyear?

Cydonia: This is the last wing that is releasedthis month, or like this week and afterwards, the format will beset for BlizzCon so I am going to really practice those decks asmuch as possible so I can perform well there. Afterwards, I’msure Blizzard will announce their plans for next year, like ifthey’re going to change the format or the ladder. Dependingon the changes they make, I’ll make objectives. I thinkit’s possible they’ll do the same they did this year,like a bunch of seasons, getting points on ladder and tournaments,but I think they might as well change it because there were a lotof complaints about it, even though it was much better than thepast.

Are you planning to go to any other tournaments? MaybeDreamHack?

Cydonia: Yeah, I registered for DreamHackWinter and I’m really looking forward to that. I really liketravelling and I’ve never been to Sweden, so that would bereally fun for me. Also, it’s a pretty big tournament andit’s always fun to compete in those. I’m going toNorthern Arena this weekend, which is in Toronto. You start to knowin advance sometimes when the tournament starts if that isn’treally last minute but I really look forward to having moreopponents to compete with.

Do you have any advice or thoughts you would like toshare with your fans or other aspiring competitiveplayers?

Cydonia: I think it’s a bit difficult togive specific advice to a large amount of people. A lot of peoplejust want to reach legend once. So, if that’s your objective,just take a competitive deck you enjoy playing, try to learn it asmuch as you can and get legend with that deck. But if you want tobe a good tournament player and go to BlizzCon, for instance, thenit’s really more important to know a lot of different decksand bring your skill level on the game as high as possible.It’s really dependant on what player you are, like if aplayer is already very good with a few decks but he is notperforming in tournaments, then maybe it’s more about themindset or about tilting or a lot of different factors.There’s the mental game and there’s understanding ofthe game itself.

Do you believe coaching helps bring your competitiveexperience to a higher level?

Cydonia: There’s a lot of people, highlevel players, who are streaming and you can watch them, ask themquestions and see what kind of plays they make. Of course, ifthere’s one specific deck you want to be really good at andyou’re already very good, you could get some coaching forthat reason. But if you’re not at a very high level,it’s probably better to try to learn from streamers ordiscuss plays with friends when you play, instead of hiring acoach. I just feel there are more cost-effective ways to do it,like if your time is really limited and you really want someone totake charge and coach you, feel free to do it, but I don’tthink it’s necessary or the best way to get good at thegame.

I think we can wrap it up. Do you have any finalshoutouts?

Cydonia: Yea I want to shoutout all the playersI have discussed ideas with and are always available to help metest, so I have a Discord group going on and it’s reallygood. So I want to shoutout to those guys, to my team as well forsupporting me and helping me start streaming. So if anyone wants tocome watch, I’m trying to stream once or twice a week, sinceit’s always nice to have more viewers. Right now, it’sbeen a pretty small stream and that means I have time to answerquestions to people and discuss plays with you guys, so it’sa good time to come watch.

What did you think about this interview? Let us know bycommenting below or tweeting us @GAMURScom.