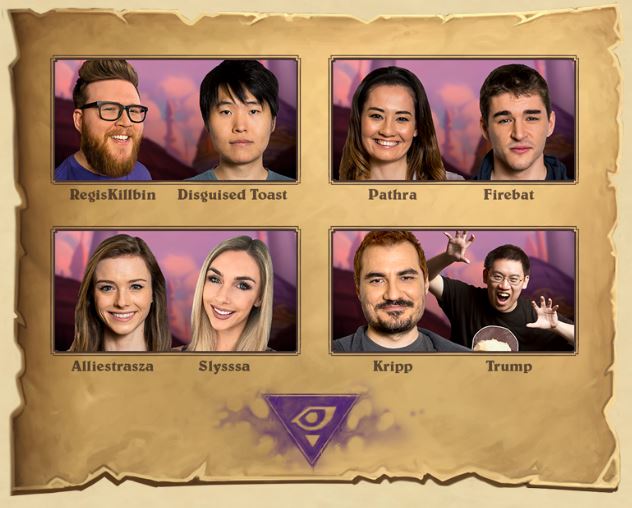 Following a post-stream recount, the team of Jeremy “Disguised Toast” Wang and RegisKillbin have been declared the winners of Blizzard’s Showdown in Dalaran event.

According to Disguised Toast, admins initially ignored his recount request, but eventually acquiesced, which led to his team to winning, despite Octavian “Kripp” Morosan and Jeffery “Trump” Shih being announced as the winners during the stream.

The event was an entertaining spin on Hearthstone’s solo content that succeeded in creating a sense of competition. Kripp and Trump both spend a fair amount of time playing non-constructed Hearthstone formats like Arena, and as a result, were the favorites to win. And with Kripp and Trump leading for the majority of the competition, it looked like they would emerge victorious, although Disguised Toast and RegisKillbin had a shot, too.

During the final leg of the event, competitors were awarded points based on how many bosses they could defeat on heroic without dying. RegisKillbin performed considerably well during this portion of the competition and as a result, he and Toast were convinced they had pulled ahead in points. When the event concluded, however, Trump and Kripp were announced as the winners by five points.

Toast, who is known to be excellent at math, immediately questioned the ruling but was laughed off by the crew. Following the event, Toast posted a tweet, saying he and Regis had been confirmed as the champions. Cora Georgiou, who hosted the Showdown, confirmed Toast’s tweet by saying the admin math was incorrect. Regis and Toast actually had beaten two more heroic bosses than Kripp and Trump, and should have been announced as the winners.

Every time a team completed a quest, they received a certain amount of points. There were also additional bonus challenges that would make the adventure more difficult but also reward more points. For example, while playing through chapter two, a quest bonus appeared that rewarded players for allowing event caster and TCG master Brian Kibler to select their treasures.

Though you won’t be able to message Brian Kibler for treasure advice, you can play the Dalaran Heist solo adventure for yourself when it goes live on May 16.