Did you like last week Tavern Brawl? If you missed the deck I played last week you have it here.

We had the opportunity to play a deck that took advantage of several of the modifiers present with the less used modifier as the first one. Not only that, I had lots of insta-concedes when the opponent saw a Mage in front. I suppose people were tired of playing again and again against the same deck. A pity for them, I wasn’t playing the deck they were thinking!

By the way, this week, for obvious reasons, we won’t have two parts, as we have a pre-made deck rule. Let’s move on!

Rule of the Week

“An encounter at the crossroads… under a manastorm! Choose a class, get random cards. Each turn your cards’ cost are randomized!”

Squared RNG! Not only you will receive a random deck but also the cost of the cards will change every turn. It’s probably the most random Tavern Brawl they have released ever. And this is the third time we will suffer it…

We will receive a random pre-made deck that breaks the rules of deck construction. You will be able to have more than 2 copies of the same card (more than 1 in the case of legendaries). The cost of our cards will change from 1 to the real cost of the card every turn. That’s all about the rule. And now what?

(I’ve not been able to play any of the cards that modify the cost of our hand yet and I don’t remember what happened when we had this rule in the past. As soon as I play one and see the effects I’ll add this info here). 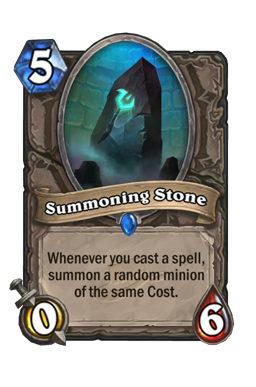 summoning-stone: If you play a spell you’ll get a minion of the reduced mana cost, not the original one.

Pray your RNGods to have an overcosted good initial hand after mulligan, then play the biggest minion you can every turn. If you are not lucky enough and you receive low cost minions you will probably die fast. There’s a faster way to end such a silly game, press Concede button and move on.

This Tavern Brawl is great to accomplish dailies, you’ll see your opponents conceding fast if it’s you the one with a big start and them with a weak hand. It also makes sense if you are a newbie and want to try lots of cards you don’t own. It’s not very skill dependant so you will enjoy playing big fatties and smashing your opponent’s face.

Personally, I don’t think I will waste a lot of time playing it. Since I started this series two months ago my ending season rank is dropping so I’ll take advantage of current weak rule to play more ranked.

It seems there’s not a lot to do with the rule but are all the classes evenly positioned? Not at all! As decks are made by neutral cards and class cards we will find differences in the second type. From now on I will consider that cards have a very low cost when I mention them. So if I refer to a high-cost card like

molten-giant I will suppose we are playing it for a few crystals. Let’s try to find out the best classes to choose.

As I said in earlier, I don’t like this Tavern Brawl at all. After around 10 games just before sending this article, I’ve seen it so lucky dependant that I won’t play it as I use to play Tavern Brawls. What do you think about? Leave a comment if you agree/disagree, share your thoughts!

And now, let’s prepare for the upcoming announcement. The new expansion is coming! Reserve your spot here today to follow the latest news.

I’m afraid I have to stop publishing this series. This announcement won’t take you by surprise as I’ve failed on sending an article two weeks in a row.

Fortunately for me, I’ve been promoted in my current job. And more responsibilities mean less free time. I used to scratch spare time at work to write the articles (games were reserved for home) and now it’ll be impossible. At least in the beginning until I get used to the now position.

Tavern Brawls were great to make a series as they change every week. But that’s been the fact that lead me to stop publishing. You know that the rule has to be dissected fast (too fast for me right now) to have an article on time and have a couple of days to test the ideas I give here. I’m not able to release the articles on time so it’s better to stop now.

This is not a “Goodbye” but a “See you later” (I hope). If I have more time in the future I would be back to write about Tavern Brawls. Only if you liked this series, of course. That’s why I will ask you to Upvote this article to reflect that you liked the whole series. If I see a lot of upvotes, that will give me strength for a comeback.

Until then, have fun and keep playing Tavern Brawls!