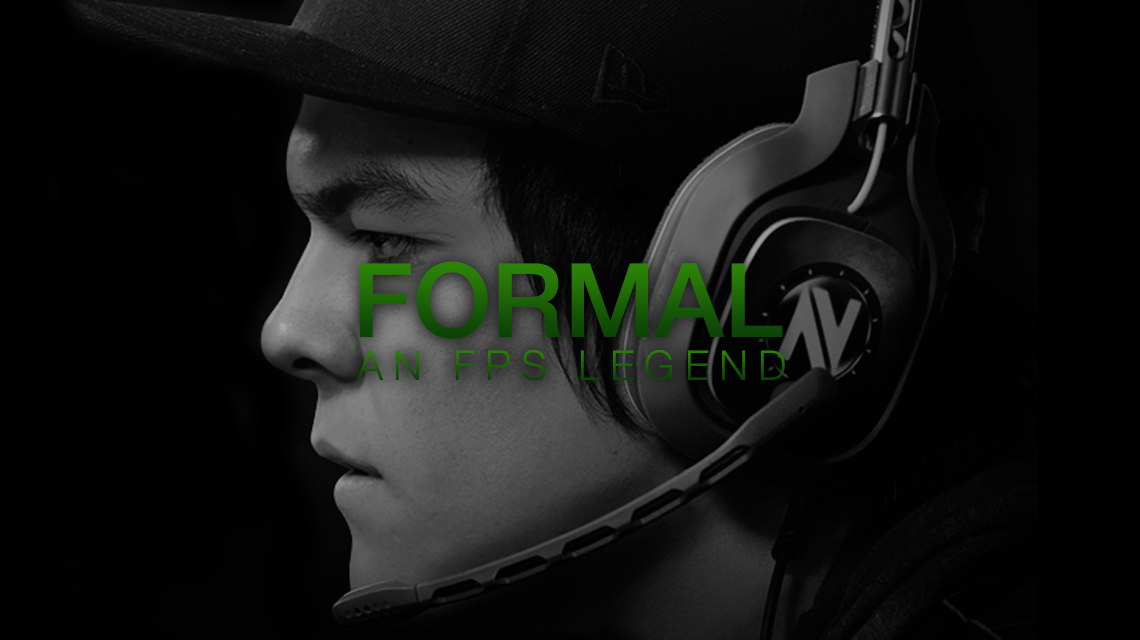 We have gotten use to having players win back to back tournaments and dominate a specific title. However, we have never seen someone manage to do the same thing for two different games. FormaL is able to play both Call of Duty and Halo at the professional level and has earned the bragging rights to be called a true FPS legend.

Matthew “FormaL” Piper is currently a professional Call of Duty player for OpTic Gaming and former professional Halo champion. He’s the only competitive player to have won multiple championship in both games, putting him as a front runner to being one of the best FPS gamers in history. For those that don’t know, FormaL began his gaming career as a Halo competitor until the game dropped off the MLG Circuit. He noticed the rising success of another favored first person shooter, Call of Duty, and decided to give it a shot. From there, FormaL played for multiple teams such as Primal, FeaR, Team Kailber, FaZe.Black, and Team EnVyUs, gaining the reputation as one of the best slayers in the game along the way. Three Tournaments in Three Weeks The past month has been a crazy one for FormaL. Just over two weeks ago, October 24-26, was the final major event for Call of Duty: Ghosts, the MLG CoD Pro League Season Three Playoff tournament. At the time, FormaL was under the professional organization known as Team EnVyUs. His team dominated the tournament and easily won the championship. This was his second major Championship with nV, after also coming out victorious at Gfinity III in August.

The following weekend, FormaL attended the eSports World Cup in Paris with nV. Unfortunately there was some tension among the players on nV during the tournament due to roster issues, and the team failed to place t4. For the third weekend in a row, FormaL attended another major FPS eSports tournament, the Halo Master Chief Collection: Launch Invitational tournament, hosted by the Electronic Sports League and 343 Industries, which took place November 8-9. He was captaining his selected team known as “Believe the Hype,” consisting of MaNiaC, LxthuL, aPG, and coach Mr.X. BTH ended up winning the first Halo: MCC tournament after battling through the loser’s bracket and winning two best of five series against Str8 Rippin.

So proud of my team we are best friends out of game and they deserved that win. So happy.

By winning both the Season 3 Playoffs and the Halo Launch Tournament, FormaL walked away with over $12,000 in his pocket in just three weeks of competition. Stats Don’t Lie Formal bursted onto the scene after landing a spot on Team Kaliber heading into the CoD Champs in early 2014. At the US Regional Championships in Orlando, he posted an overall K/D of 1.12 and made some huge plays for his team as they qualified for the World Championship. He managed to match the same K/D at the World Championship event, but unfortunately placed 12th with tK. He would move on from the team and find another opportunity with FaZe.Black. Despite improving his overall performance, he had two poor placings with FaZe at UGC Niagara and MLG Anaheim. He moved on and joined Team EnVyus, and that’s when things got scary. Team EnVyUs absolutely dominated the competition at Gfinity III, largely due to FormaL and his overall K/D of 1.35. He ranked 1st out of every single player at the event and shot into the spotlight as one of the game’s best slayers. After two more T6 placings and 1.10+ K/Ds at UMG Dallas and UMG Nashville, FormaL again found himself as the number one player with a 1.34 K/D at the MLG CoD League Season 3 Playoffs in Columbus. He went on to win the Championship with Team EnVyus to cap off an incredible first year of Call of Duty. What makes his run of success even more incredible, he did not compete at any major events during the Black Ops 2 season. He accomplished all of this in just under a year. Stats provided by CoD Stats FormaL Joins OpTic Gaming Now, FormaL’s talents have lead him to the renowned and fan favored competitive Call of Duty team, OpTic Gaming. He has been given a huge opportunity to the biggest name and organization within the community of Call of Duty eSports, teaming with two XGames Gold Medalists Matthew “NaDeSHoT” Haag and Seth “Scumpii” Abner, who are currently looking for a fourth player to fill their roster going into MLG Columbus and the MLG CoD Pro League Season One for Advanced Warfare. FormaL has been very adamant about wanting to compete with Crimsix during Advanced Warfare. It would not be surprising to see him join the OpTic squad after his contract issues with Evil Geniuses are settled. If this happens, we could be looking at the next CompLexity-esque team to dominate throughout the year. Be sure to follow us on twitter for breaking news in the gaming and eSports industries. Twitter – @eSportsNation