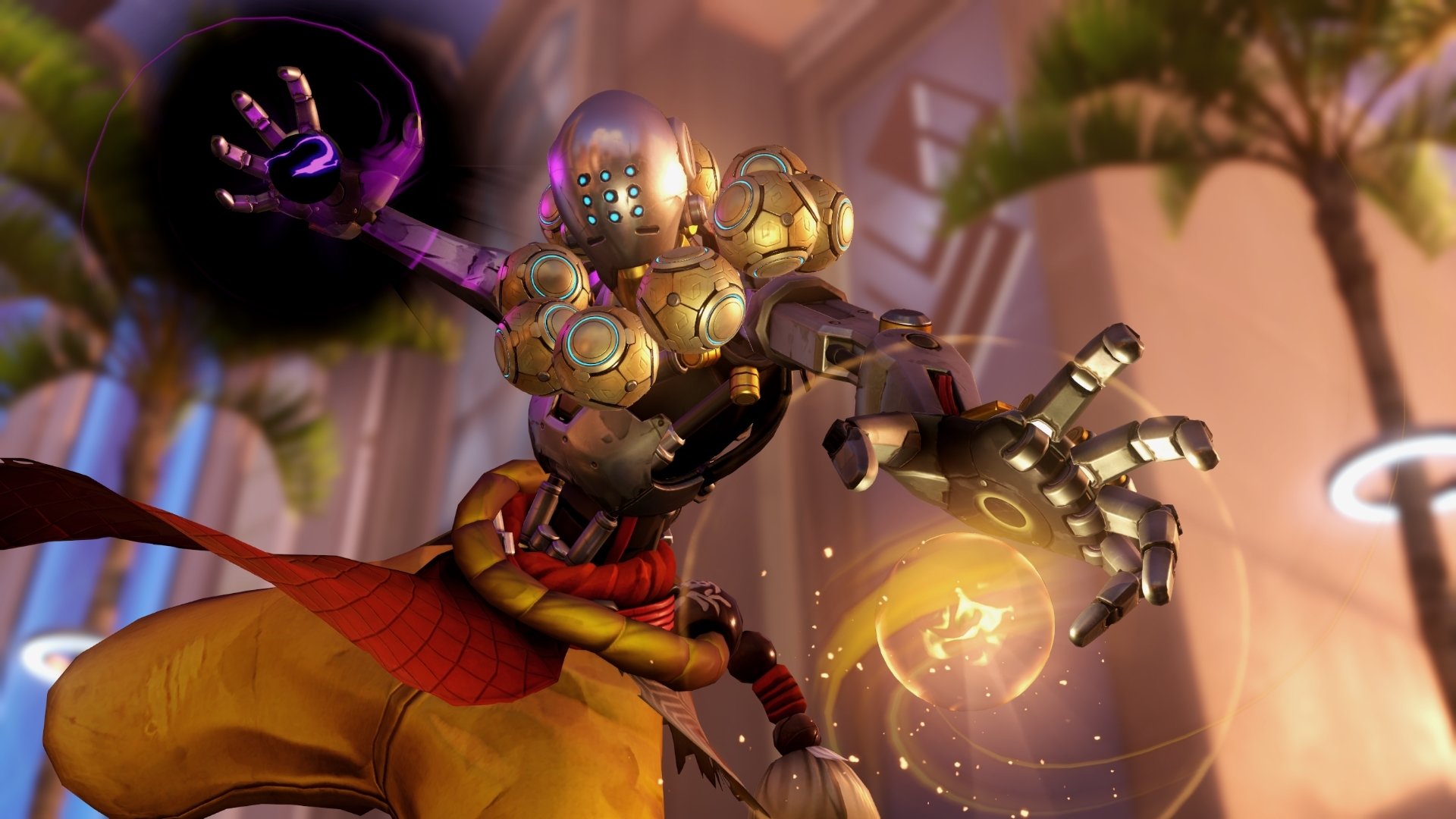 After abandoning his pre-programmed life in the wake of a spiritual awakening following the Omnic Crisis, the monk Tekhartha Zenyatta believed that the only way to repair human and omnic relations was through interpersonal connection and engagement.

In the game of Overwatch, however, Zenyatta is all about healing his teammates and buffing their damage output. This combination makes him a unique hero on the roster and very deadly in the right hands.

Here are some tips to “experience tranquility” and help make a difference on your team.

Zenyatta is classified as a support hero, but he does way more than heal. In fact, healing comes secondary to the amount of damage he’s capable of dealing. This makes him the game’s main offensive support hero, used best as a secondary healer to complement another of the game’s supports.

Zen’s damage output is where he really shines. The first of his abilities, Orb of Discord, is a targeted homing projectile that buffs incoming damage by 30 percent. It can be planted on an enemy within his line of sight and used to prioritize targets to take them down as fast as possible. It also has zero cooldown and can be used instantly at all times.

Zenyatta works best when notifying his teammates of target currently has Orb of Discord so they can flood the target and quickly drain its HP. Whether it’s a problematic tank with a high health pool, or a squishy support hero who is keeping them alive, Discord is one of the game’s most useful tools in damage dealing.

Orb of Destruction is Zenyatta’s primary fire and it is a linear projectile that does 46 damage per hit while traveling at 66.66 meters per second. His alternate fire, Orb Volley, shoots up to five orbs at once when fully charged up. That’s a max damage output of 230 damage per volley, especially useful at shredding through stationary targets like Bastion, Widowmaker, or unsuspecting tanks.

Mastering the feel and the aim of Zen’s projectiles are key in maxing out his potential, as he is truly lethal from a decent range. Charging up volleys and launching them into a crowd of enemies is helpful for doing good chip damage and assisting your team in a fight, especially when combined with Discord. Volley is also very handy for leading shots when an enemy is turning a corner or moving horizontally within your view.

As a healer, Zenyatta works best when complementing another support like Lucio, Ana or Mercy. His Orb of Harmony works just like Orb of Discord, as it is a targeted homing projectile that travels very quickly (120 meters per second), but heals just 30 health per second.

It will continuously heal a target, but the orb will last for three seconds once the ally is out of Zenyatta’s line of sight, just like Discord. The passive healing of the ability allows Zenyatta to plant a Harmony orb on someone within his line of sight and get back to dealing damage and Discord orbs.

If he’s partnered up with a Mercy, he can keep an orb on a second target while she heals a first. Harmony will also help keep tanks alive, although not nearly as well as other support heroes’ healing abilities. Playing Zenyatta as a solo healer is definitely not recommended.

If Zenyatta pays close attention to his allies’ health pools and switches Harmony targets accordingly, he can be an effective healer. Pre-emptively planting Harmony on an enemy before they enter a fight is also very helpful. But the fact is that Harmony’s healing-per-second is the lowest in the game for support heroes.

“Pass into the iris”

While Orb of Discord can help out immensely, Zenyatta’s ultimate is arguably one of the most game-changing abilities in Overwatch. Transcendence is an area of effect heal that covers a 10-meter radius and heals all allies within it at a rate of 300 health per second, 10 times the healing capability of Orb of Harmony.

Not only that, but Zenyatta’s movement speed doubles and he becomes invulnerable during the six-second effect of the ultimate. With an instant casting time, Transcendence is useful in multiple ways.

First and most importantly, Transcendence is well-used as a counter to a bunch of other ultimates in the game. With its healing output, Zenyatta can plant himself in the midst of his team and keep them alive through a number of attacks, such as Genji’s Dragonblade or Soldier: 76’s Tactical Visor. Friendlies will still take damage, but if triggered at the right time, Zenyatta can keep them alive until the assault comes to an end.

Using Transcendence to begin a team push is also a good strategy, as is using it in the middle of a team fight as allies are taking damage. A well-timed ult from Zenyatta can be a huge difference-maker when it comes to locking down an objective.

Speaking of objective play, Transcendence also comes in handy when contesting a payload or a capture point. Using the ability to contest a point is a good tactic, as he is invulnerable while using it. The speed boost that Transcendence gives is also good for a last-ditch effort of getting to a point to contest it while waiting for your team.

Orb of Discord is a fantastic anti-tank de-buff, as it amplifies incoming damage by 30 percent. Zenyatta can help himself if he has to in a solo fight, but Discord will easily help him and a teammate take down someone like Winston, Reinhardt, or Orisa.

Zenyatta’s Transcendence is one of the game’s best counters to a number of offensive ultimates, like Genji’s Dragonblade, Soldier: 76’s Tactical Visor, or Zarya’s Graviton Surge. Without Transcendence, any of these abilities can be lethal. If Zenyatta uses his ult as an answer to them, however, they become largely nullified.

One of the trickiest heroes in the game to kill, Pharah is especially lethal with a Mercy attached to her, providing healing and damage boosts. One of the best ways to deal with this combo is to plant a Discord orb on her and let hitscan heroes like McCree and Soldier: 76 go to work.

Zenyatta is strong in many ways, but his health pool and movement speed are a couple of his weaknesses. This makes him an easy target for heroes like Widowmaker and Hanzo, whose long-range high damage can take Zen out with quickness.

Genji and Tracer can go wild on Zenyatta and he will likely be a high priority target for them. Their speed and maneuverability are hard for Zen to combat against, and he will come out of those fights the loser in most scenarios.

Zarya’s Projected Barrier is especially problematic for Zen, as it effectively cleanses Orb of Discord off of her allies. Her barriers will protect her and her teammates well from Zenyatta’s damage.

Zenyatta can be a challenging hero to master, but the reward is worth it in the end. He is the weakest of all of the game’s healers at the basic level, but his ability to heal and burst heal with his ultimate, combined with the insane damage he’s capable of, make him a force to be reckoned with in a variety of team compositions.