Elden Ring presents its player base with a variety of unique weapons that range from short ranged daggers all the way to mighty great bows. Players will not have trouble finding a weapon that suits their play style, or even help round it out or develop it into something new. Not only are a lot of these weapons great to use, but they also look amazing.

One class of weapons that players are beginning to look into are whips. Elden Ring currently has six different whips for players to get their hands on and are all unique in their own way. Whips provide the Tarnished with ranged-based melee attacks that can come in handy when facing a large monster or boss that excels in close-quarters-combat. These long range melee weapons are typically striking weapons, but one in particular is uniquely a slashing whip.

The Urumi is a whip that primarily scales with Dexterity. It has the best final Dexterity scaling among all other whips and can even advance to S-Scaling by creating a Keen Urumi +25. This whip is unique compared to all other whips in that it is the only one that uses slashing attacks.

All other whips in the game are striking weapons, but the Urumi is a creative hybrid between a whip and sword. Its item description states: “This weapon made of extremely thin, flexible blades of metal is wielded like a whip by Nightfolk warrior. Though in essence a whip with a cutting edge, it can also be used as a spear to pierce foes.”

The Urumi also has a thrusting attack that does pierce damage, adding even more to the versatility of this unique Elden Ring weapon.

Where to find Urimi Whip

Unlike a lot of other unique and cool weapons in Elden Ring, the Urumi can be found relatively early in a playthrough. Located in the Caria Manor, players can loot a body on the south-east rampart.

Starting from the Manor Upper Level Site of Grave, turn around back down the elevator and head south. Down below to the southeast is a rooftop that can be jumped to. Jump down and continue south to find a body guarded by a few of the creepy spider hands with rings. This body has the Urumi Whip. 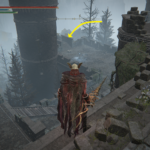 Players will find the Urumi rather fun to use. Especially in player versus player scenarios where the unique charge attack will slash and finish with an unexpected thrust attack. The weapon is upgraded to +25 using normal Smithing Stones, and can also be infused with the player’s choice of an Ash of War, only adding to its versatility.