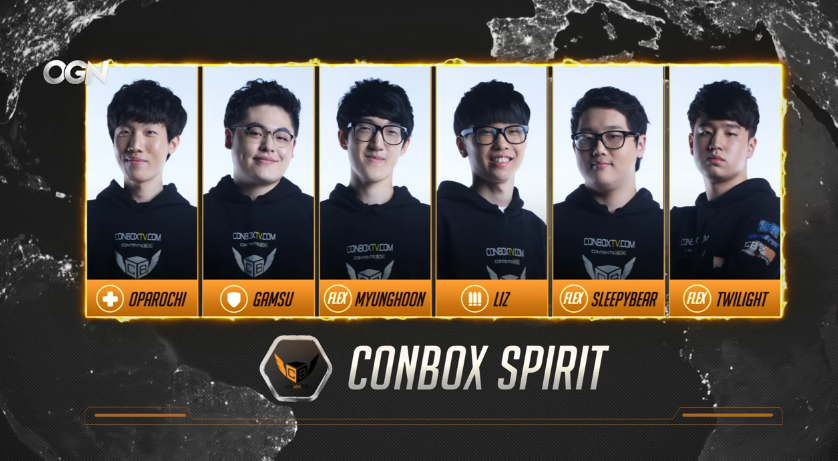 So far, the depth of Conbox’s tournament runs have been unable to live up to the strength they have displayed. Through a series of misfortunes and team development that took just a bit too long, we’ve reached a point where Conbox’s story is marred with disappointment.

Hence, the tragedy of Conbox.

Coming into season one of Apex, we had more questions than answers. The game was far from figured out, and many teams were unestablished. However, two facts were clear; Lunatic-Hai was the top Korean team and EnVyUs was still in contention for the best team in the world. Conbox just happened to have the misfortune of both Lunatic-Hai and EnVyUs being placed in their group.

With the competition as fierce as it was, all indicators pointed to Conbox having no chance to make it out of their group. And in a rare occurrence for Apex, the result played out as expected. Conbox ended the group stage 1-2 and in third place, avoiding relegation but still short of playoffs.

Losing their series against EnVyUs, in hindsight, was to be expected. The European team won the whole season, and Conbox was just another victim. However, that does not mean the series was an even affair. Conbox only won Volskaya, while they were held early on both payload maps, and crushed on Nepal.

It was how Conbox turned around to face Lunatic-Hai that demonstrated their rapid improvement over the course of the season. It was another 3-1 defeat for Conbox, but this time, it was a nailbiter. Two maps were tied and had to be decided with sudden death rounds on Nepal, which Conbox sadly lost. A scant two rounds separated Conbox from victory and a trip to the playoffs. As disappointing as the series was, in a strange way, it established the storyline template that Conbox would follow for the next season as well.

A month after falling to EnVyUs, the Conbox we saw face Lunatic-Hai was not a team to be taken lightly, and in any other group, the team would have easily broken out of the group stage. Besides being unfortunate with the group drawings, I do believe that if Conbox had more time to practice together, whether it be their match taking place later or Zunba not going to the World Cup, they could have defeated Lunatic-Hai.

A few small errors fixed and suddenly Conbox would have been a playoffs team. And in season one of Apex, they were far and away the best team to not make playoffs and were objectively better than LW Blue, who did. But sadly, we never got to see what could have come of this roster, as the offseason saw Zunba go to Lunatic-Hai and TheHell depart the team.

Coming into season two of Apex, Conbox was much more fortunate with their group, being placed with Kongdoo Uncia, Afreeca Blue, and Cloud9. This time around, Conbox had to face down just one titan in Uncia instead of two. Afreeca Blue was having an identity crisis, as Arhan was not the carry he once was in the new tank heavier meta, and meanwhile, Cloud9 was having a similar crisis as they had a new roster that was still trying to establish roles.

Conbox could have had success in this group, but losing Zunba was a sizeable hit to their strength. While TheHell being replaced with Twilight was a direct improvement, Zunba being replaced by SleepyBear did not work out in Conbox’s favor. That isn’t to say SleepyBear played poorly; quite the opposite in fact, as his Roadhog was excellent. But losing their primary Zarya player in the meta that developed during season two was a significant detriment to the roster.

All three teams had their issues to work through, which turned Group C into a bit of a disaster. Kongdoo Uncia crushed their way through the group, leaving the other three teams to scrap it out. Unfortunately for Conbox, their season developed in a similar pattern to the previous one. They started out slow, losing to Cloud9 3-1. Once again, in their second match, they were crushed, this time against Kongdoo Uncia 3-0 in a match where they only made King’s Row competitive.

Mirroring season one, Conbox finished out strong. But this time, they won their final series against Afreeca Blue. Coming into the match, the expectation was for Afreeca to take the win easily as they had just defeated Cloud9 while Conbox had been struggling to function as a unit. However, in a narrow 3-2 series, Conbox was able to pull off the upset as they exploited Afreeca’s weakness on payload maps.

The group ended with Uncia sitting in first at 3-0 and Afreeca, Cloud9, and Conbox all tied at 1-2. However, despite Conbox holding the head-to-head win against Afreeca, their slow start to the season bit them as they lost out in map score.

Nearly identically to last season, just a scant couple of rounds separated Conbox from a trip to the playoffs. If they had closed out Route 66 against Cloud9 and King’s Row against Kongdoo Uncia, it would have sent them into the round-of-eight. Instead, due to how close the group was, those two lost rounds meant Conbox must fight for their season three slot.

Once again, Conbox didn’t make the playoffs, despite showing significant improvements toward the end of the season, notably some serious proficiency on payload maps. Mirroring last season, Conbox is arguably a better squad than a team that did make playoffs, but unlike season one, Conbox now finds themselves facing relegation.

There is a chance the relegation tournament group Conbox ends up in contains LW Red and Rhinos Gaming Wings, both of which have looked absolutely terrifying in Apex Challengers, meaning that Conbox’s spot in season three of Apex is far from assured.

They have yet to survive a group stage, and now they must do so or be relegated to challenger, where I suspect the roster will be broken up and the stronger players would be absorbed by other organizations. I’m a fan of Conbox and their scrappy frontline playstyle and I believe we could see so much more out of this roster. I have my fingers crossed that Conbox won’t get a third strike.

Do you think Conbox can survive relegation? Tweet your answer to us @GAMURScom or @GAMURS_OW