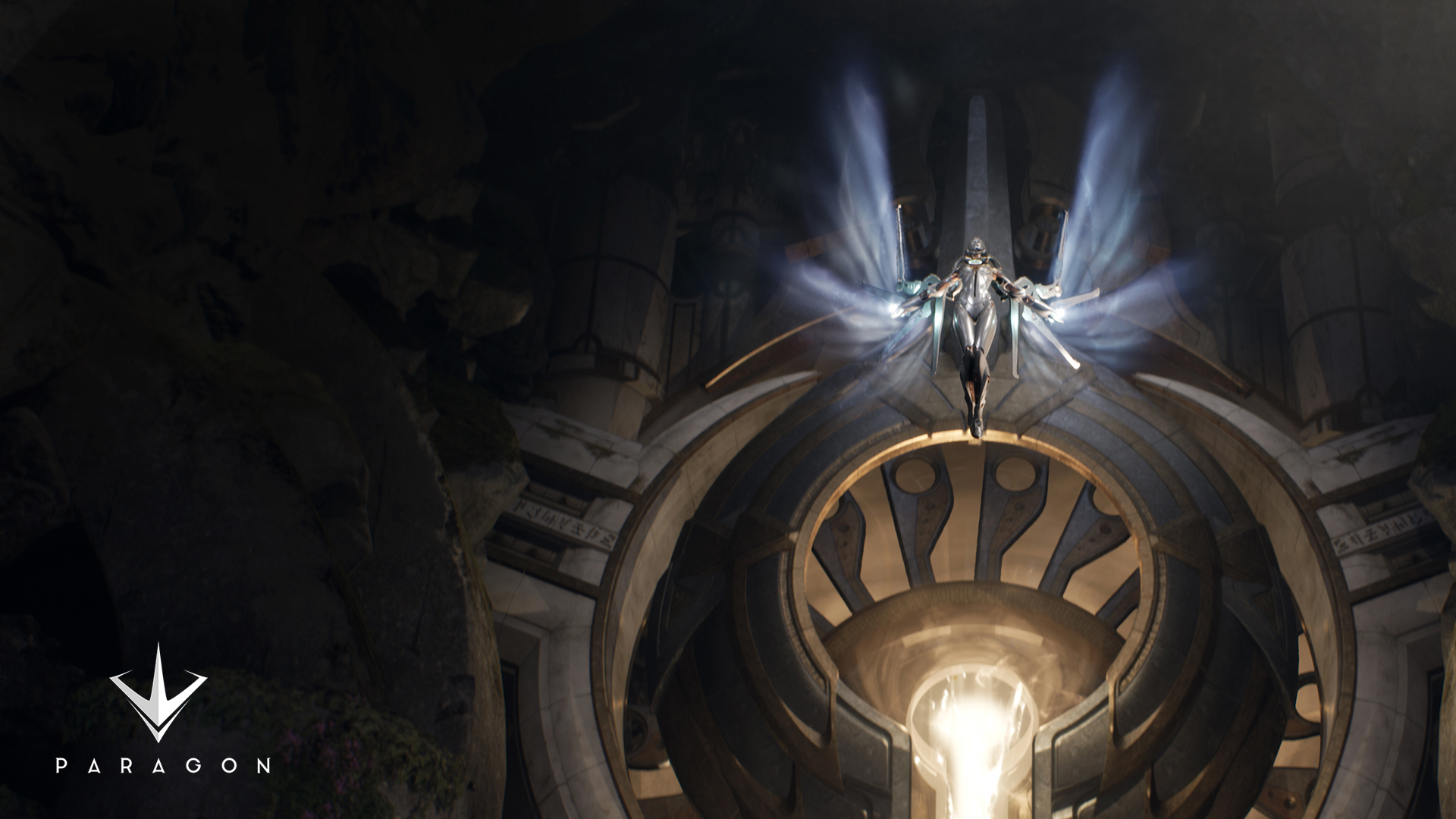 Little silver metal men holding giant silver guns march in two rows down a lane overgrown with moss. Around them, in what looks like a jungle city that has fallen to disrepair, science fiction and fantasy characters wage war as they dodge lasers shot down from towers.

This is not a movie—although it almost looks like one. Welcome to the world of Agora or, more appropriately, the arena. Agora is the battleground for Epic Games’ new multiplayer online battle arena (MOBA) vehicle, Paragon.

Announced during the keynote at the PlayStation Experience in San Francisco on Dec. 5, Paragon will go into early paid access in spring and open beta in summer, both for PC and PS4. Paragon has been in production for around two years now, and is built with developer Epic Games’ fabled Unreal Engine 4—the same technology behind Gears of War 4, Shenmue 3, and Street Fighter 5.

It is a standard MOBA in many ways. Agora still has three lanes, minions, towers, jungle, and a core. But the game is Epic’s first MOBA. And in an attempt to stand out in a crowded market—Dota 2, League of Legends, Smite, and Heroes of the Storm, just to name a few—the developer is completely reinventing some of the genre’s core gameplay elements.

Similar to Smite, Paragon has a third-person view. This is intended to improve the player’s experience, so they feel like they’re actually a part of the world, according to Paragon Creative Director Steve Superville.

“Traditionally MOBAs have the top-down view, and you’re more a puppeteer than in control,” he says. “[In Paragon] you have all the things that traditionally make MOBAs great, and then you pair it with this super heroic fantasy feeling that you get when you actually participate in fights.”

To facilitate this learning process and maximize vision, Agora is a more open map than most MOBA players are used to. The entire arena is three-dimensional and shaped like a bowl, with the bases sitting up high on either end.

The lanes are also tiered: The top lane is actually high, the mid lane is at ground level, and the bottom lane is low. The jungle goes down between the lanes—so you can sit in a lane and look across to other lanes to see what’s going on. This is different from traditional MOBAs, where vision across lanes is made nearly impossible by the jungle being on the same level, and areas being blacked out if a team doesn’t have minions or wards down.

“It’s kind of depressed, so you get a lot of fun action moments that you don’t really feel the same about in a traditional top-down MOBA,” says Superville. “The jungle has this canopy, and you can’t see down into it, but you can jump through it. So it’s kind of that scary spot between lanes, just like a jungle should be.”

The idea of vision in Paragon is different because of the arena structure, but this also changes the way players engage in team fights. If you’re running down a lane you can see the fight that a teammate is in up ahead and start planning how to engage with the fight before you’re even in combat range.

The item system is another MOBA element Paragon is overhauling. Instead of a set number of items available in a shop for varying amounts of gold, Epic Games is introducing a deck-based card system.

“Traditionally in MOBAs you have all the items always available to you,” Superville says. “If you were trying to be clever and sneaky and do a build with a particular hero that’s unconventional, whoever is fighting against you has the item that makes that build invalid or a bad choice, available all the time. So we felt like it limits some of the opportunity for strategy and meta-game.”

In Paragon, players get a base amount of cards (the exact number has not yet been decided). As they play, they can collect more cards of differing rarity. These can then be used to build a deck specific to each hero and taken into battle—likewise, the total cards per deck haven’t been finalized.

“So you basically confine yourself to a certain number of items, that populates your store in-match,” Superville says. “Then while you play in-match you earn currency to equip cards and make yourself stronger… but we’re making committed choices as we go into the match.”

He describes this system as similar to a game of chess, where players might know that a common build for a hero includes certain characteristics, and as such build their own hero to directly counter. But then the first player might expect that and build their deck in a completely different way.

Superville says the plan for early access is to have at least a few hundred cards available. Epic also doesn’t plan to be stingy about earning cards; by the time players decide to try ranked games (once Epic gets around to doing ranked matches), they will have plenty of cards available to make them competitive.

Paragon will be the first MOBA ever released for PlayStation (the Xbox has Smite). But since the game is designed for two platforms Epic is taking a slightly different approach. It is working closely with Sony to make the game experience seamless across PS4 and PC. All items, progression, and heroes will be stored on a centralized account.

Epic is hoping this will all be done by open beta—the idea is that there will be no advantage to playing on one platform over the other. Players can pick and choose, or switch between, PS4 and PC at will, possibly with eventual in-game voice chat that works across platforms.

“We limited ourselves as much as we could to make sure the control scheme fit on a controller,” says Superville. “The pace of the game is reserved enough that the precision of mouse and keyboard doesn’t impact player competency.”

If the game takes off this could be huge for esports, as very few games support cross-platform esports competition—even Smite developer Hi-Rez keeps competition seperate for PC and Xbox players. Superville says he hopes to eventually see Paragon in the esports arena.

“We’re just focused on making a fun and competitive game,” says Superville. “We’ve never made a game like this before, so we want to be humble and honest with ourselves about the chance that we have to get this right, and it’s going to take a lot of work.”

Once gamers clamor for Paragon to become competitive, Superville says that Epic will do its best to support them—although what exactly this means is still unclear.

For now Agora is the only arena in Paragon, and it will be that way for a while. Balancing heroes across multiple stages is an additional headache that Epic doesn’t want to deal with just yet as it prepares to launch the game beyond internal testing.

In order for it to compete in such a saturated market, Paragon’s unique gameplay and map design will have to dazzle—and be easily adaptable for traditional MOBA players. Epic has every reason to be optimistic.