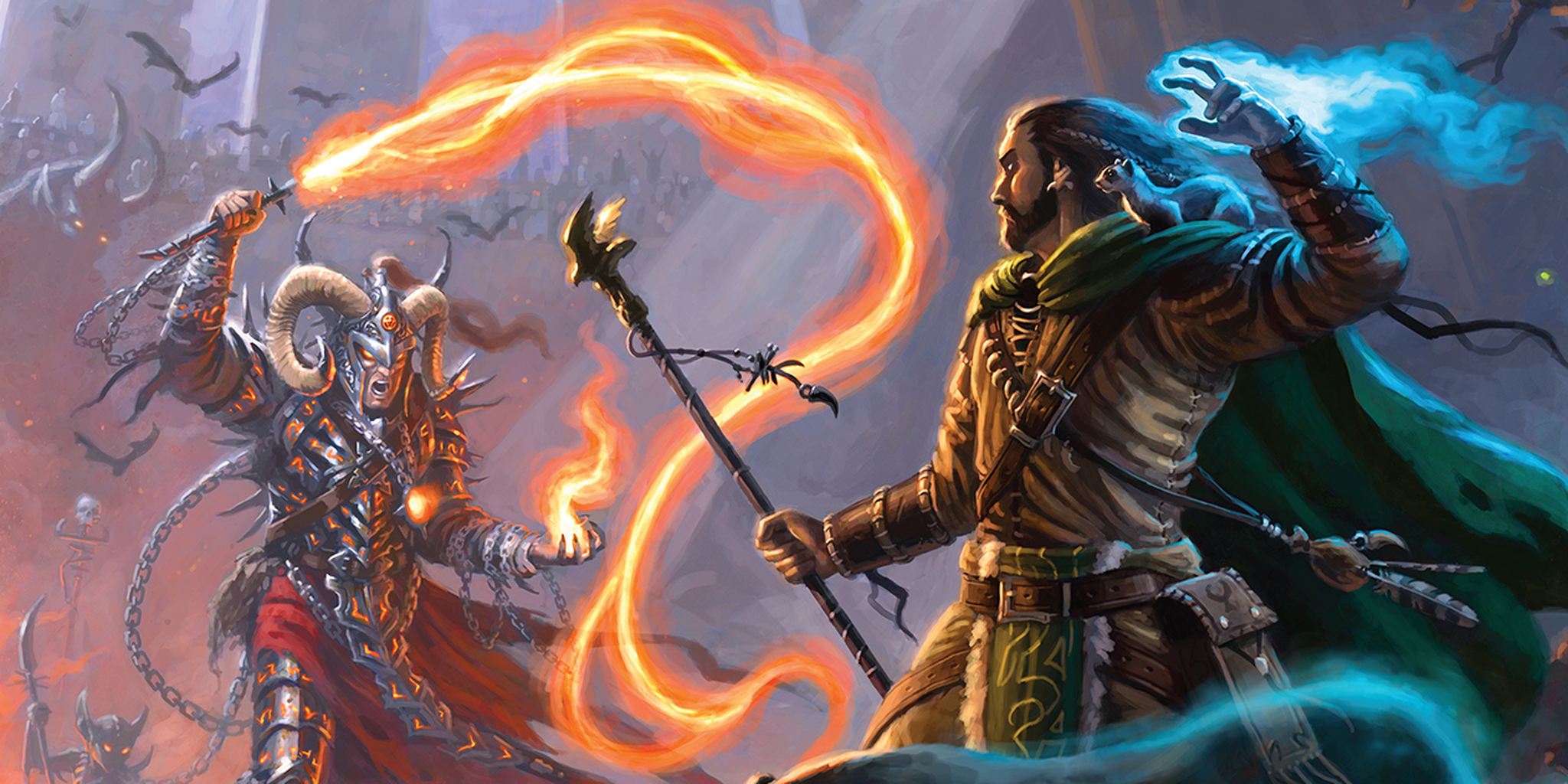 Hearthstone has done the impossible. It’s brought lifelong gamers—those who relish the twitchy, take-no-prisoners technical wonder of Dota 2, League of Legends, and StarCraft—to the realm of the leisurely, slow-paced glory of collectible card games.

I know people who swore they would never never indulge in such an uncouth hobby and then become absolutely forsworn in Hearthstone’s glory—even to the point of that now their curiosity is piqued for  games that don’t entirely exist in digital form.

If you’re the same, don’t worry. Don’t resist those urges. I’m here to help you. There’s a whole world of card games out there that scratch those same tricky itches that Hearthstone satisfies, and I’d love to be your curator. I’m not an expert, there are plenty of allegedly wonderful games that I haven’t had the chance to play—Call of C’thulu, Warhammer Invasion, A Game of Thrones to name a few—but this should still be a worthy primer.

If you love Hearthstone, you’ve got to try these games.

I think I’ve heard of this one?

Probably, yes. Magic The Gathering is arguably the most popular CCG (that’s collectible card game, what Hearthstone is) of all time. Originally printed back in ‘93 from tabletop maestro Richard Garfield and still going strong to this day. It’s basically just Hearthstone with a few different wrinkles.

I think I remember some weird kids playing it in middle school.

Probably. But people take Magic a lot more seriously than your Pokemons and Yu-Gi-Ohs, there are Magic players on the pro tour that take home like 40 grand for winning first place.

That’s a lot of money for a game about spells.

Well, actually, it’s very similar to Hearthstone in some ways, to the point where basic Hearthstone terminology like “face” “aggro” and “control” are all elementally borrowed from Magic. Each player represents a “planeswalker,” summoning minions, walls, spells and artifacts. The idea is to keep a board presence while whittling down your opponent’s health from 20 to 0. It’s basically just Hearthstone with a few different wrinkles.

That sounds doable, but why should I play it?

Well, Magic offers some real-life interaction that you just can’t get in an internet card game like Hearthstone. For instance, there are cards in Magic that let you cancel your opponent’s spell outright, and that sort of reactionary play just unfortunately doesn’t exist in Hearthstone. If you want to learn more about the wonderful world of card games, this is a great place to start.

Also it’s super easy to get into. Wizards of the Coast publish these “dual” packages, where you get two distinct decks right out of the box which means your girlfriend or boyfriend no longer has any “but I don’t know how to construct a good deck” excuses. Also I guarantee your local board game store has a Friday Night Magic series.

But I hate interacting with people in real life!

Well, you’re in luck! Because there’s also a bunch of rock-solid Magic computer games that work exactly like you’d expect them to.

You’re probably thinking of the Star Wars CCG that came out a decade or so ago. This is the Star Wars LCG published by Fantasy Flight and designed by Eric Lang. It debuted back in 2012 and has been pretty well supported since.

Wait, you went over CCG, what’s and LCG?

An LCG basically just means you don’t have to buy random booster packs to try and make your deck better. If you are a child of the ‘90s you probably remember desperately coercing your parents into getting you new Pokemon boosters, only to dismally receive 11 cards you already had. It’s the same thing that happens in Hearthstone when you drop 100 gold and get back a Wisp.

LCG stands for Living Card Game, it means Fantasy Flight announces exactly what’s in each of the new card packs before you buy them. So if they’re releasing a booster that bolsters a metagame you’re not interested in playing, then you can sit that one out. It’s a far more diplomatic, fan-friendly way of releasing new stuff.

Okay, that doesn’t sound too intimidating, what about the game?

Well, you’re looking at something that’s going to be pretty different from Hearthstone. You know when you’re playing that game, and on turn one you have one mana, turn two you have two, etc.? That’s now how things work here. In Star Wars LCG mana is “resources” as determined by a deck of objective cards that let you tap them to put out minions. Which means that, if you want, on turn one you can completely exhaust your resources and put out Darth Vader or something.  Not that you’d want to do that, because you’ll be strapping yourself of resources for the next turn or two, forcing you to instead put out some scrubs (or just nothing,) but the option is available. It makes the game a lot more flexible than Hearthstone, but that can be a good thing. We hate having a crappy opening hand that’s pretty much useless do to mana cost.

That’s a lot to digest, is there anything else I should know?

Yep. The game is also asymmetrical. One person plays the light side of the force, the other the dark, and both have separate winning conditions. Basically the light side of the force is trying to destroy three of the dark side’s objective cards, while the dark side is trying to prolong the game long enough for a Death Star Dial (yes, there is a Death Star Dial) to count up to 12. This means that the dark side will naturally be playing more defensively, while the light will be doing everything they can to mount an offense in limited time. It’s actually quite thematic and honest to the source material.

Is that all there is?

Not at all! But that’s all we’ll cover for right now.

Okay, this sounds interesting, I like Star Wars and I like thinking really hard about cards, where can I get this?

The core set comes with four decks and some tertiary cards for later use, that will run you about 40 bones and give you plenty for some fun living room play. You’ll be able to find it at your friendly local game store, they usually have a whole section for Fantasy Flight stuff.

Yes they do, it’s one of the most celebrated games of all time, and it only came out back in 2012.

It’s perhaps the best supported card game in the universe next to Magic.

Okay yes, so technically this game first came out in 1996, from the mind of Richard Garfield (the Magic guy we talked about.) But it was reprinted and reinvented in 2012, and has had an unprecedented run of success since then.

So why is it so good?

Well it’s got a lot more bluffing than you see in Hearthstone. It’s an asymmetric game with one player serving as a hacker (or “netrunner”) and the other as an international corporation trying to hold onto its assets for dear life. The Corp installs security protocols (called ICE) to slow down the hacker, and all of that is done facedown, which leads to a lot of trap-laying and counterplays. It’s among the most cerebral card games on the scene. Do you like the feeling you get when you bait your opponent into playing around Freeze Trap even though you actually have Explosive on the board? It’s kinda like that, except much, much more brutal.

Does that mean it’s complicated?

Well, yes. Personally I’m not very good at Netrunner, but like Hearthstone it’s a ton of fun to watch people excell. It’s also perhaps the best supported card game in the universe next to Magic, so if you get in, you’ll be in for life.

How could I get started?

It’s a really well supported community, down here in Austin, TX we have our own Netrunner league that meets at a coffee shop. There’s also a ton of expansions and booster packs, but the base set hooks you up with plenty of cards to keep you interested.

This one looks different…

Yep. Mage Wars is a very spatial game. You’re two mages in an arena, summoning minions and casting spells while also moving around a grid. If you’ve ever wondered why Thrall doesn’t just duck out of the way from the Pyroblast, well, then this is your game.

Instead of using a deck, Mage Wars gives you a whole laminated spellbook of stuff you can cast.

Totally. You’ve got a whole bunch of cards in your spellbook, and you can prepare them each turn, as well as issuing commands to the minions you’ve already summoned. It’s almost like a wargame crossed with your traditional 1v1 bashfest.

Wait, when you say “spellbook, do you mean…

I do! Instead of using a deck, Mage Wars gives you a whole laminated spellbook of stuff you can cast. You’re not drawing a hand, you’re literally paging through your options, and trying to be mana-efficient without the restriction that other games offer with their hand limits and discard phases and such.

No but you should. Mage Wars eliminates the single biggest factor of chance (or RNG) that comes with modern card games. There are a number of Hearthstone games you’ve lost from the very beginning just because your deck was shuffled in a specifically counterintuitive sequence. In Mage Wars you just pick what you want to do straight up. You don’t have anyone to blame but yourself.

Man, getting two Ancient of Wars in the opening hand against Zoo does kinda suck, okay I’m on board!

Glad you see it my way!