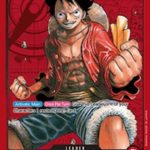 Pirates from the shounen manga and anime series One Piece have transformed into a digital card game by BANDAI, showcasing well-known characters like Kaido and Monkey D. Luffy as Leaders.

An official release of the One Piece TCG took place during July in Japan, with an English version of Romance Dawn slated to drop in December 2022. Before the English launch, a special pre-release event will occur in September at select local game stores, allowing players to experience the new card game through four preconstructed decks.

Each of the four preconstructed One Piece TCG decks contains a mono-color Leader. Dual-color leaders are included in the release taking place in Dec. As of writing, there are eight Leader cards players can crack in Romance Dawn booster packs. A total of nine, including the mono-color Leaders within the pre-release starter decks, are known so far. Updates will take place upon new Leaders getting revealed.

A Leader is the foundation of a One Piece TCG deck. The color of the Leader will determine the color of the cards that can get included in a Constructed deck. A player’s life total is equal to the life total of a Leader, and each Leader has a unique ability that fits into synergistic archetypes.

English versions of the cards via NakamaDecks. Card stats, art,  and abilities are subject to change prior to the official English version release of Romance Dawn. Leaders will also have multiple art versions, providing collectibles worth money on the secondary singles market.

Here are the One Piece TCG Leaders in Romance Dawn revealed so far.

Eustass Kid is the Leader of the Mono-Green One Piece TCG starter deck with a type Supernovas/Kid Pirates. Their life total is five and has an ability that allows players to discard cards to switch Eustass Kid from Rest to Active. 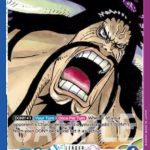 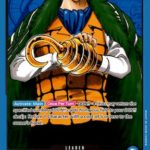 Crocodile is the Leader of the Mono-Blue starter deck and has a Blue and Purple version as well. The Mono-Blue version has a life total of five and can bounce Character cards back to an opponent’s hand. And the Blue/Purple version has four life that synergizes with Event cards. Their type is The Seven Warlords of the Sea/Baroque Works. 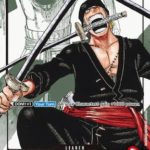 Roronoa Zoro is a Mono-Red Leader with the type Supernovas/Straw Hat Crew. Their life total is five and the type is Supernovas/Heart and the ability synergizes with an Aggro Character heavy archetype. 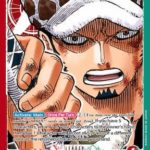 Trafalgar Law is a Red/Green Leader in the Romance Dawn set with the type Supernovas/Heart Pirates. Law’s ability supports a dual-color archetype with a total life of four. 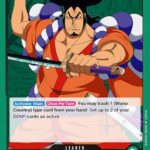 Kozuki Oden is a Mono-Green Leader with the type Wano Country/Kozuki Family. Oden has a life total of five and their ability has a form of Ramp by turning Don!! cards Active. 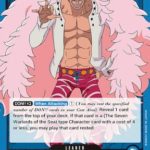 Donquixote Doflamingo is a Mono-Blue Leader with the type The Seven Warlords of the Sea/Donquizotte Pirates. Cheating out cards from a player’s deck, Doflamingo has a life total of five. 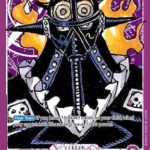 King is a Mono-Purple Leader within the One Piece TCG with the type Animal Kingdom Pirates. Their ability reduces the power level of all an opponent’s Characters and has a life total of five.