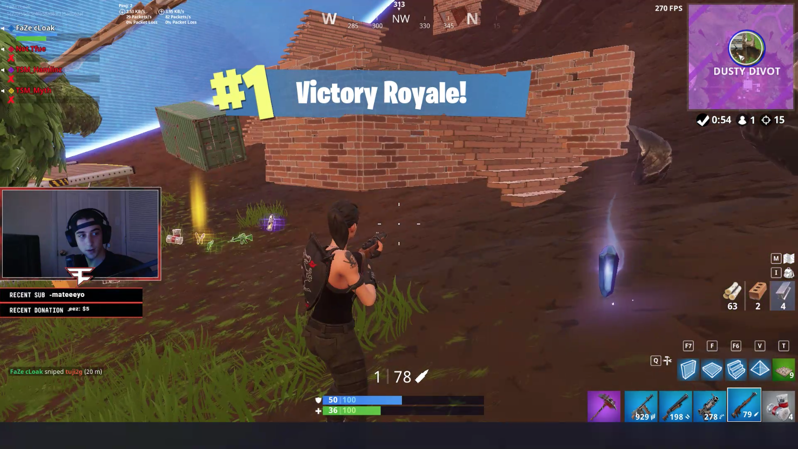 Myth and Hamlinz got their rematch against the FaZe duo, though, after defeating Andre “TypicalGamer” Rebolo and Nicholas “Thief” Smorto in the losers bracket finals.

The FaZe duo were in a similar situation last week—despite having a winners-bracket advantage, Tfue and Cloak lost to Tyler “Ninja” Blevins and Jacob “Hysteria” Reiser. Ninja and Hysteria were eliminated today in the fifth round of the losers bracket by Nick “NICKMERCS” Kolcheff and Jimmy “HighDistortion” Moreno, however, and FaZe refused to suffer the same fate two weeks in a row.

Tfue and Cloak built an early lead in the first game of the grand finals by picking up a slew of kills in Shifty Shafts and Tilted Towers. Both duos continued to slay as they rotated around the map, resulting in a 35-kill game with FaZe leading TSM 23-12.

Game two got off to an interesting start when Cloak and Myth both went down early, but they were quickly revived by their teammates. Both duos lost one player when Myth and Cloak were eliminated a few minutes later. Tfue clutched up for FaZe, though, to secure the Friday Fortnite championship.

This week’s victory marks Tfue and Cloak’s fourth Friday Fortnite win in nine tournaments—this accomplishment is even more remarkable considering no other duo has won the tournament more than once.

Tfue and Cloak will try to dominate the competition once again in the next installment of the Friday Fortnite series.