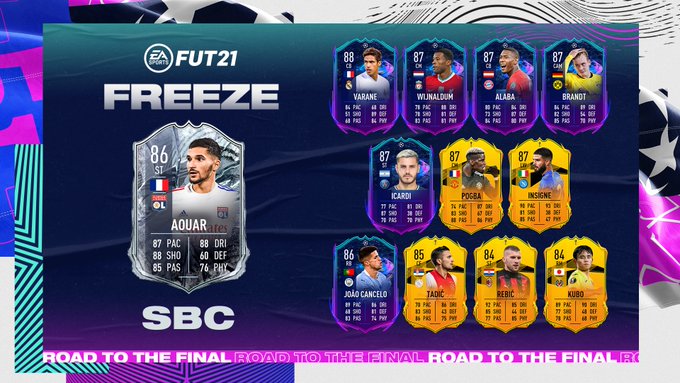 EA Sports added an 85-rated FUT Freeze version of Houssem Aouar from Lyon to FIFA 21 today. This item will be available through the squad-building challenge (SBC) menu in FIFA 21 Ultimate Team.

This is Aouar’s first special card in FIFA 21 Ultimate Team. EA has changed his position from center midfielder to a striker and greatly increased all of his stats, including Shooting (+13), Pace (+11), Physical (+7), Passing (+5), and Dribbling (+4), when you compare this card to his 81-rated gold version. His Defending skill, on the other hand, was decreased (-6). You’ll have until Dec. 27 to get this card.

FUT Freeze Aouar costs around 121,300 FUT coins on PlayStation 4 and has a higher price on Xbox One (123,400) and PC (141,100). EA transformed Aouar into a more balanced card with considerable Pace but lower Defending and Physical skills. You can apply the hunter chemistry style to nearly maximize his Pace (+10) and improve his Shooting (+6) even more.

If you want to complete the FUT Freeze Aouar SBC, you’ll need to build one squad. The Houssem Aouar squad requires an 85-rated team with 80 chemistry minimum and at least one player from League 1.

Here’s the cheapest solution to complete the FUT Freeze Laimer SBC right now, according to FUTBIN, a website that specializes in FIFA content: