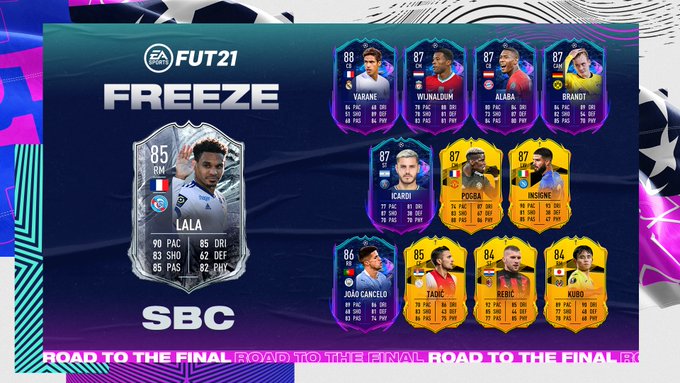 EA Sports added an 85-rated FUT Freeze version of Kenny Lala from Strasbourg to FIFA 21 on Sunday, Dec. 20. This item is available through the squad-building challenge (SBC) menu in FIFA 21 Ultimate Team.

This is Lala’s first special card in FIFA 21 Ultimate Team. EA has changed his position from right wingback to right midfielder and greatly upgraded some of his stats, including Shooting (+20), Pace (+11), Passing (+9), Dribbling (+9), Physical (+6), and decreased his Defending (-11) when you compare this card to his 79-rated gold version. You’ll have until Dec. 27 to get this card.

FUT Freeze Lala costs around 121,950 FUT coins on PlayStation 4 and is a bit more expensive on Xbox One (124,850) and PC (134,050 FUT coins). EA focused on giving Lala more Shooting and Pace, which will enhance his attacking skills. You can apply the engine chemistry style to further boost his Pace and Dribbling skills.

If you want to complete the FUT Freeze Lala SBC, you’ll need to build one squad, which requires an 85-rated team with 75 chemistry minimum and at least one player from Ligue 1.

Here’s the cheapest solution to complete the FUT Freeze Lala SBC right now, according to FUTBIN, a website that specializes in FIFA content: